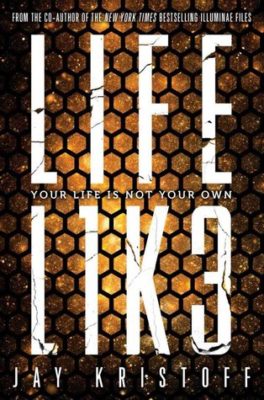 Read a full summary of Lifel1k3, book #1 of Jay Kristoff’s Lifelike trilogy, right here! This page is full of spoilers so beware. If you are wondering what happened in Lifelike, you are in the right place!

What happened in Lifelike?

Eve lives in Dregs, an island that was once Kalifornya after the Corporations fought War 4.0.

She lives with her grandpa, Silas, who has cancer from this harsh radiation-ruined land; her friend Lemon a small, scrappy orphan; her little protector robot called Cricket; and a part robot dog named Kaiser.

To make money to buy meds or her grandfather, Eve competes in robot fighting. At the beginning of the story she fights a rogue robot who has killed many humans. He will fight competitors until he is OOC (out of commission). He destroys Eve’s robot and almost kills her, but she screams out at him releasing some unknown energy and drops the robot. This ability marks her as an abnorm.

A group of zealots known as the Brotherhood comes to crucify her after hearing of her abnormality, but a handsome lifelike (a type of robot thought to no longer exist) crash lands near their home and helps defend. The lifelike, Ezekiel, seems to know Silas. They fight off the Brotherhood, but another enemy arrives. Her name is Faith, and she is also a lifelike. Both lifelikes call Eve by the name Ana and seem to know her.

The two lifelikes fight as grandpa gets their airship off the ground. But some time during the takeoff Faith enters the cockpit and kidnaps grandpa.

The ship crashes into the ocean, and everyone is swallowed by a kraken, a manmade creature which scours the ocean to find usable scraps.

During this time Eve remembers things from her past. In her mind, she flashes back and forth from an unknown past to a manufactured past and the present. Finally, she rips the memdrive Silas implanted in her brain from her skull, and everything comes rushing back.

Eve, whose name was Ana, is the daughter of Doctor Nicholas Monrova, the man who invented lifelikes. He worked for Gnosis Corporation in Babel tower. Six lifelikes, Ezekiel, Faith, Grace, Hope, Raphael, and Gabriel, became like his children. Ana also had two biological siblings. She grew to love the lifelikes. Robots are governed by three rules which put human lives over their own. Raphael became depressed in his situation and lack of options. He finally committed suicide as an act of rebellion—something he could choose for himself. Grace and Gabriel were in love but had to hide it as it was against the rules. Ana fell in love with Ezekiel.

A bomb went off just before they board a spaceship and it killed Grace. This sent Gabriel on a rampage of revenge and determination to recreate Grace. He found a way to release them all from the three robot rules.

Ana also remembers four beautiful lifelikes who killed her family one by one. Somehow Ana lived though she lost an eye. Gabriel, Faith, and Hope were three of those killer lifelikes.

Silas Carpenter, who was the chief of research and development at Gnosis (and not her grandpa at all) got Ana away, and they began a life in Dregs. Silas gave her a manufactured set of memories and called her Eve.

Ana, Lemon, Ezekiel, and Cricket fight their way out of the kraken with Kaiser in tow. A lifeboat takes them to Megopolis where they sneak to a sort of orphanage where Hope works. Ana is furious, but Hope says she is trying for redemption by helping children.

A man called Preacher who works for Daedalus Technologies is after Ana. He has a bio-enhanced body and has been hired to bring her in dead or alive. Hope holds him off, but he kills her. The group narrowly escapes by stealing a tricked out car from the Admiral. They tear out across the radiation-torn desert toward Babel and Silas, but Preacher follows along with the Admiral’s Freebooters who want the car back. Ana and her crew lose most of them by entering a glasstorm.

When they reach Babel Ana remembers that it was Ezekiel who shot her and so is in a fragile mental state when Preacher returns to finish them off. It looks like Preacher has won until Kaiser, the robot dog, sacrifices himself by finding a bomb and blowing Preacher and himself to pieces.

They fight their way into Babel and Ana learns that it was Lemon all along who has the power to stop machines with her hands. Ana isn’t happy that she has been lied to even by her best friend.

How did Lifelike end?

Ana enters, and Faith destroys her robot, Cricket. Faith takes the bot’s head to Silas who is dying in a prison cell in the tower.

Ana is taken by Gabriel who is now slightly insane. Ana learns that only she, the last living daughter of inventor Nicholas Monrova can open the lab where Gabriel will then be able to create more lifelikes including his beloved Grace who died in the blast. The problem is, the system called Myriad, says it doesn’t recognize Ana, her DNA is unknown to it.

Eziekel and Lemon rescue Silas and they put Cricket’s personality into a giant logica robot. Together they fight Gabriel, Faith, and Mercy until each of the lifelikes are finally OOC—at least until they heal. Silas dies, and Ana is shot three times in the back while protecting Lemon. Ana dies.

But then she wakes up. Myriad tells them that the real Ana was actually killed in the blast that destroyed Grace. Ana’s father secretly put her memories in a replica lifelike based on Ana herself. He called this new kind of lifelike, Eve. Eve would live as a human, contain strength like a human, and heal like a human unless damaged beyond repair. If this happened, she would assume the body of a true lifelike and become like them. Ana/Eve’s world turns upside down. The real Ana’s body is somewhere out there, though Myriad won’t tell them where, and attached to life support. Every person Eve has known has lied to her. Even Eziekel is in love with the real Ana, not Eve. During her personal crisis, she burns with anger and sends everyone away from her including Cricket and Lemon. Hate fills her heart.

Eve is there when Gabriel wakes and tells him that they have much work to do.

**We’re looking for someone to recap book two, Dev1at3. Click here to let us know if you are up for the task!***

There you go! That’s what happened in Lifelike. Hope you enjoyed this Lifelike summary with spoilers.

Ready to read Lifelike or Deviate?  Click to buy and help us pay for hosting!