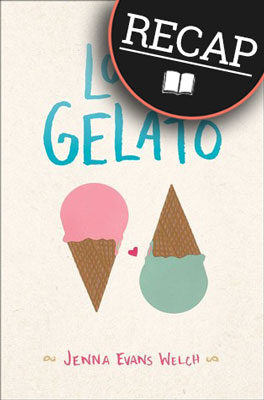 Ratings
4.7 stars on Amazon
4.12 stars on Goodreads
Add Love and Gelato at Goodreads.

What happened in Love and Gelato?

Lina’s mom, Hadley, has always told her stories about her time in Florence and her special friend Howard who lives there.

When Hadley dies of pancreatic cancer, Lina’s grandma sends her to live with Howard in Italy. She says it was Hadley’s wish because Howard is Lina’s father.

When Lina arrives after finishing her school year, she is bewildered to discover that Howard lives in and is the caretaker of an American cemetery.

Howard’s friend Sonia gives Lina a journal that once belonged to Hadley. It covers the time Hadley lived in Florence as a young woman. Apparently, she mailed it to the cemetery to wait for Lina’s arrival. Lina reads it slowly over the next several weeks and refuses to talk to Howard about their relationship until she has finished.

Lina meets Ren Ferrara, who goes to the local American school. They have been anxiously awaiting her arrival since Howard came by to say she would enroll in the fall.

But Lina plans to leave before the summer is up. She will go back home to the US.

Ren and Lina become quick friends, and their bond deepens as they read Hadley’s journal together. Too bad Ren has a beautiful girlfriend named Mimi.

Lina also meets an attractive British boy named Thomas, and they spend some time together.

Through Hadley’s journal, Ren and Lina learn that Hadley fell in love with someone who worked at her art school. Hadley referred to him as X in the journal, and Lina assumed she meant Howard. Later, though, Hadley calls Howard by name, and Lina begins to suspect that X is another man. Ren and Lina track down X, who turns out to be Matteo Rossi, one of Hadley’s old professors. In the journal, Lina finds that Rossi broke Hadley’s heart. Rossi treats Lina horribly when they meet, even though, through appearance, she knows that he is her father. He denies that she is his child and insults Hadley.

After this terrible meet-up, Lina is not herself. In her emotional upheaval, she kisses Ren and realizes she loves him. But he pulls away, and to save face, she says she’s never seen him as anything but a friend.

Lina believes that he’s devoted to Mimi when he starts avoiding her after the incident.

How did Love and Gelato end?

Lina learns from the journal that Hadley did start to fall in love with Howard, but by then, she was already pregnant with Rossi’s baby. She went back to the states breaking Howard’s heart.

Lina learns from a friend that Ren had already broken up with Mimi because he hoped to date Lina. Lina is afraid she ruined everything. She confronts him at a party, and he says he was hurt when she stressed that she had never ever ever considered him as anything but a friend. They part ways.

Later that night, Lina wakes to Ren throwing coins at her window. Ren apologizes and tells her that he loves her. Lina decides to say in Florence.

Howard reads her mother’s journal, and Lina learns that he already knew he wasn’t her father. He told her that he considers himself a father figure, and he wants to help raise her and be a part of her life. Hadley had sent to the journal for Howard as well. She wanted him to know that she loved him and made a mistake for leaving.

Lina looks forward to the future for the first time since her mother died.

Ready to read or reread Love and Gelato? Click to buy and help us pay for hosting! (affiliate links)