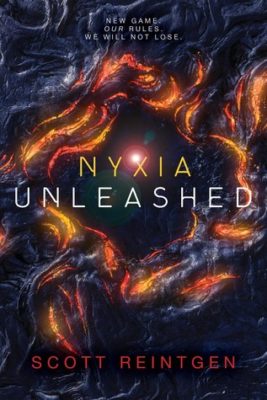 Read a full summary of Nyxia Unleashed, book #2 of Scott Reintgen’s Nyxia Triad, right here! This page is full of spoilers so beware. If you are wondering what happened in Nyxia Unleashed, you are in the right place!

What happened in Nyxia Unleashed?

Nyxia Unleashed picks up where Nyxia left off. Emmett has just fought Roathy and launched to Eden. Rather than fight to the death though, Emmett seals Roathy in an airlock using nyxia. Emmett doesn’t know if he is dead or alive.

When Emmett emerges on Eden, he regroups with the others, the Genesis, who have fought their way onto Eden. He learns that Anton killed his best friend Bilal during the competition. Others had to kill other competitors. They are angry at Babel and begin talking about revenge.

Together the group travels to one of three Babel supply stations. This one is called Foundry. On the way, they see many strange creatures including a century, the most deadly animal on the continent (Grimgarden). When they arrive at Foundry, they learn that a teenager called Kit is the only person here. As part of the Interstellar Contract, Babel was able to build three supply stations, and each one is manned by one marine. Kit is that marine. (West runs Myriad Station, and Rahili runs Ophelia Station)

The other Genesis squads arrive, and tensions rise. Isadora is pregnant, and she believes Emmett killed Roathy, the father of her child and she is out for revenge.

The next morning the Adamites arrive. Adamites is the name Babel calls the natives. They actually call themselves the Imago. This planet alternates names between Magnia and Glacia based on which of their two moons is near. The Imago have a special relationship with the moons.

The Imago can no longer reproduce, and none of the Earthens have seen any females of the race.

The Imago supply three guides to show each of the Genesis crews around and monitor their mining: Beckway of the Seventh Ring, Bally of the Third Ring, and Speaker of the Second Ring. The Genesis team has twenty-one days to work and mine nyxia for Babel.

They begin immediately. Speaker is the guide for Emmett’s group. Speaker tells them that their society is broken into rings, one through seven. The first ring holds the most esteem and goes down from there. The seventh is the military ring.

On the first day a tunnel collapses and almost kills Morning, but she forms a nyxia barrier around herself. Emmet goes in after her and gets her out. Together, they manipulate the many shards of raw nyxia pushing their energy in a circular motion.

Many of the animals on the planet have meshed together to form one stronger species. They believe it happened when the second moon was formed.

The Genesis crew finds, to their amazement, that they no longer have to wear their translation masks. They can understand each other without them.

During mining, a girl named Holly tries to manipulate too much nyxia, and it pushes back. She is Gripped by the substance, meaning that she will be compelled to do useful things and will not act like herself. Their guides refuse to take her to Sevenset, their final destination on Magnia, for treatment. They will wait until the entire group can go.

Emmett and Jamie stumble upon a hidden room of Foundry which holds about sixty Babel marines. The marines are in a frozen sleeplike state. Kit catches them but doesn’t seem concerned. Kit’s dad is one of the frozen marines. His mom is off planet on the Babel space station. Kit doesn’t seem to know the things of which Babel is capable.

While on their next mining run their guide Beckway leaves, taking Isadora and Ida with him. It is because Isadora is carrying a baby. Isadora will be revered and will have sway with the Imago. This scares Emmett and Morning since Isadora wishes to kill Emmett.

Morning plays an audio clip of the chief of space operations David Requin, talking about how the recruits, Emmett and his friends, were never meant to go home. They have no intention of taking them off Magnia.

That night a group of three Imago attack the supply station hoping to capture one of the Genesis. Kit and Speaker defeat them. Speaker says they are a separate group called Slings. They want to kidnap one of the Genesis and force them to take them to Earth.

They spend the next several days mining nyxia. On the eighth day, they have enough to launch into space and to Babel. Anton sneaks on the shipment and travels with the nyxia to the space station.

Katherine Ford is happy that Defoe’s plan to change public opinion of Babel on Earth is working. She is about to launch into space with another crop of ten young recruits.

The Genesis travel to Myriad Station for another round of mining. Here, Emmett, Jaime, and Longwei discover that this station also has a hidden room full of marines.

West, the marine in charge of Myriad is missing. Morning and the Genesis 12 crew leave to look for him. While they are gone a member of the Sling cult sneaks in and captures Emmett. To his surprise, this Imago is a woman called Jericho. The Genesis were led to believe there aren’t many women left among the Imago and that they are all in Sevenset. Morning saves Emmett and kills Jericho.

Anton arrives on the Babel Space Station and sneaks around gathering supplies and weapons. He discovers that Bilal is still alive.

After Emmett’s capture and return, the Imago guides demand that the Genesis move on to Sevenset for protection. Babel agrees but requests that the group travel in Babel trucks and stop by Ophelia Station to make sure their marine there is still alive (she is). This all seems fishy to Emmett, but the Genesis follow the orders and eventually arrives at Sevenset.

The Genesis crew passes through Seventh Ring—the military—and have dinner with them. The Imago restore Holly, but to their horror, another man, a prisoner, is forced to trade places with her. He is Gripped instead.

At dinner, Emmett learns that the nyxia actually comes from one of the moons. It falls from the sky.

Isadora has called for Emmett’s head.

They arrive in Sixth Ring where the Genesis feel most at home. These people are the poor of the Imago society just like they were on Earth. The upper-class Imago look down on these people. Emmett keeps their emissary, Thesis, from whipping a beggar. Afterward, Emmett invites the beggar, Axis, to be his guest at dinner.

A famous chef, Scarving, prepares dinner and praises Emmett for stepping in for Axis.

Anton finds Erone, Babel’s Imago prisoner. Erone says he allowed himself to be taken. Anton releases and arms the man trying to convince him to wait and plan. Erone says he is going to kill everyone on the ship.

How did Nyxia Unleashed end?

When the Genesis arrive on Fifth Ring, they are disarmed by guards and greeted by Feoria, ruling Daughter of Sevenset and a human girl. The girl’s name is Jacquelyn, and she is David Requin’s daughter. She was the only survivor after a human vs. Imago skirmish years ago.

The ladies inform Genesis that there is no shortage of Imago Women. They are not on the brink of extinction. The Imago led Babel to believe that this was true so that they would send the Genesis. Babel thinks that they are handing the Genesis crew over to be part of a fertilization program—to make babies. Babel has traded these young people’s lives to mine nyxia. The Imago assure the Genesis that this will never happen, though they did have reason to bring them to Magnia. Feoria tells them that the two moons are set on a collision course. Their collision will destroy Magnia soon.

The Genesis weigh their options, wondering which side will most likely get them back home to Earth. They decide to side with the Imago for now.

The Genesis and their escorts travel past the other Rings, all the way to the Sanctum. Here they learn that the Imago have decided on a lottery system to determine which citizens will get to leave the planet and board the Babel ship. Sixty people from each ring have been chosen—they are the Remnant.

Isadora is here, and she comes to Emmett in the night and cuts away a piece of his shirt proving that she could have killed him but didn’t. She does this to show to Morning that Emmett is safe and to guarantee her place with them when they leave Magnia.

The Daughters allow Babel to destroy Sevenset. Genocide was Babel’s plan all along. The population flees while Babel attacks the city and sends more marines. The Genesis and the lottery winners travel by submarine boats to their launch stations. When they emerge from the water, Babel marines attack. Omar is killed.

They fight their way through and travel inland on foot. When they reach their access point to the underground tunnels, a new group of recruits, Genesis 13 and Defoe are waiting.

Emmett’s group fights Genesis 13 and kills all but three, who are taken hostage. Defoe kills Jaime and Morning cuts off Defoe’s hand, but he gets away. Longwei follows Defoe pretending to side with him and betray the Genesis.

The Genesis and their Imago allies bury their dead and confirm that Defoe burned the launch station. Half the Remnant are dead. Jacquelyn plans to lead the survivors to another launch station. They don’t know if Babel destroyed all of them or if they even knew for what the stations would be used.

Emmett’s parting thought is that Babel will burn.

The book ends as Anton and Erone kill Requin and seize control of the Babel Space Station command center. Genesis 14 requests to dock.

Ready to read Nyxia Unleashed or Nyxia Uprising?  Click to buy and help us pay for hosting!

I got this beauty at an event with Erin Morgenste

I decided to read a historical romance over the ho

I need suggestions! I want to read a couple of awe

Chime in if you participated in #NaNoWriMo this ye

I got to meet @erinmorgenstern, the author of my all-time favorite book yesterday! What a night!!! 📚💕

February 4, 2020
The King of Crows (The Diviners #4) Read full recaps the previous books in this series (spoilers!).