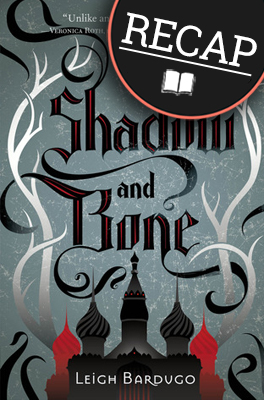 Ratings
4.5 stars on Amazon
3.97 stars on Goodreads
Add Shadow and Bone at Goodreads.

Important Info about Shadow and Bone

Second Army: The army of Grisha

Volcra: Monsters who were once human and live in the Unsea

Ravka: The country Alina and Mal live in

Kribirsk: A city next to the Shadow Fold

What happened in Shadow and Bone?

At the age of eight, Alina and Mal, orphans in the Keramzin orphanage, are tested for Grisha abilities. They don’t seem to have any.

Years later, they are in the First Army and are on their way to Kribirsk near the Shadow Fold. They plan to cross the Fold to gain supplies from West-Kavka, but Alina is nervous. Many don’t survive the Fold.

Things aren’t as easy between Alina and Mal as they were when they were kids, though secretly, she’s in love with him.

The Volcra attack while their party is in the Fold. They nearly kill Mal, but Alina produces a blinding light that repels the Volcra. She saves him.

After this, the Darkling, leader of the Second Army, questions Alina. He decides that she needs protection and sends her to Os Alta (the capital of Ravka). As they travel, assassins from another country attack, though the Darkling saves Alina.

She learns that she is the Light Summoner (the most powerful Grisha next to the Darkling). Others believe she will save them from the Shadow Fold.

At the Little Palace, Genya, a Grisha with the ability to conjure beauty, makes Alina presentable for the king. Over time Alina learns to live in the Little Palace. She trains in fighting, and Baghra teaches her to control her powers.

The Darkling reveals that she is his only hope at destroying the Fold. He tells her he’s looking for an amplifier to give her more power. To do this, he plans to find a powerful stag to create an amplifier.

Finally, Alina starts to gain control of her powers once she decides to let Mal go.

To Alina’s surprise, the Darkling kisses her.

He presents Alina to the world and shows off her powers for the first time at a ball thrown by the King and Queen of Ravka. She wears black, the Darkling’s color.

Mal also happens to be in the Palace because he has located the stag.

Baghra reveals that she is the Darkling’s mother. The Darkling is the Black Heretic, the one who created the Shadow Fold. She tells Alina that he hopes to use her to destroy the other countries, not the Fold.

Alina runs away and gets pretty far before the Darkling’s guard catches up to her. She evades them and then runs into Mal. He has deserted the army to help her, and they decide to find the stag together.

Mal realizes he has been in love with Alina all along, and they kiss.

How did Shadow and Bone end?

They find the stag, but Alina can’t kill him before the Darkling’s army arrives. The Darkling kills him and makes Alina an amplifier, binding her to the Darkling.

The Darkling forces Alina to travel to the Fold under the guise that she will destroy it. Mal is thrown overboard, and Alina discovers she has more power over her amplifier than the Darkling since she didn’t kill the stag. She breaks free and jumps overboard to save Mal.

She protects them using her light but lets the Volcra have the ship. They run to West-Ravka.

In the epilogue, Mal and Alina board a ship that will take them across the True Sea. Alina intends to destroy the Darkling.

Ready to read or reread Shadow and Bone, Seige and Storm, or Ruin and Rising? Click to buy and help us pay for hosting! (affiliate links)