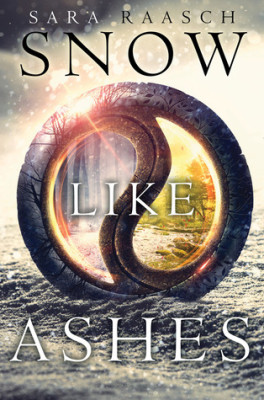 You’ll like this exciting start to a new series by Sara Raasch. I really liked Meira the main character. The twists and turns were great and I didn’t guess the ending early on which was awesome and refreshing. Read on for what happened in Snow Like Ashes with spoilers!

Ratings
4.2 stars on Amazon
4.05 stars on Goodreads
Add Snow Like Ashes at Goodreads

Main Characters and Other info

Background: Each of the kingdoms of Primoria has a magic conduit that only works for the royal family. The royal family is either female or male line based. With these conduits they can create a plentiful harvest, make people better soldiers, provide health, or even force their people to obey (the king of Spring, Angra, uses his magic to enhance anything bad or evil rather than the betterment of his kingdom). These conduits were created from a giant ball of magic that is somewhere beneath the season kingdoms (to which the entrance has been lost). They are in the form of things like a locket, a ring, a dagger.

Sixteen years ago, the kingdom of Winter was attacked by the land of Spring. Only a few Winterians managed to escape and the rest were killed or enslaved. Their leader, Queen Hannah, was killed and their conduit, in the form of a locket, was broken in two. One half is kept around Angra’s neck and the other is kept on the move. Those few Winter refugees have been in hiding ever since.

Meira, an orphan since the attack on Winter is in hiding with the other Winterian refugees. Her best friend Mather is Winter’s young king. It’s easy for Meira to forget that Mather is king. She knows she has feelings for him and possibly he does for her too but they are kept at arms length by their stations.

After countless failed attempts to retrieve the locket by the Winterian group, Meira is finally allowed to go on a mission to follow a lead on the whereabouts of a locket half. She is able to retrieve it after a run-in with General Herod. The Winterian refugees are relieved to be halfway to having their complete conduit but Sir is angry that Meira was in so much danger. Mather continues to worry that even when they get the other half, he will not be able to use the magic since the Winter Kingdom line is female based and he is the only child of the late Queen Hannah.

Unfortunately, Meira was tracked by Spring’s men and the group of Winterians is forced to move their camp. They go to Cordell, a Rhythm Kingdom and meet with their ruler, King Noam. Soon Meira finds that Sir and Mather have arranged a marriage for her to King Noam’s son, Prince Theron. Though Theron is nice enough, Meira is livid that Mather has done this to her. He is sad about it as well but it was the only way for Winter to gain aide from Cordell.

During her time in the castle Meira is angry and avoids her etiquette classes that they are trying to force her to go to. There is a tense, unspoken power struggle between King Mather and Prince Theron. Meira has frequent dreams about Jannuari and Queen Hannah. Eventually Hannah is even talking directly to Meira in these dreams. This leads Meira to try to learn more about the magical conduits. Maybe there is a way to defeat Angra without them. She learns that a “great Decay” came from the conduits.

One day Meira finds a letter from King Noam to King Angra. In it Noam tells Angra that he now owns all of Winter and is willing to sell King Mather as a show of good faith that Winter is entirely under his control. The Winterians are devastated by this news, but Noam’s plan backfires. His letter only leads Spring to attack Cordell in an effort to stamp out the remaining Winterians.

During the resulting battle, Meira sneaks onto the battle field against Sir’s orders. Sir is killed and Meira is captured by Herod. But just before Meira is taken, she clings to Sir’s dead body and feels a great coldness sweeping over and around her.

While unconscious on her journey to Spring she dreams of Hannah. Hannah shows her how the great Decay came to be. It was from so many people using conduit magic for evil. The shadow grew bit by bit from that. The eight rulers created the eights royal conduits and almost completely drove the decay away. But Spring’s king allowed the last bit of Decay to come into him. Her dream jumps forward to Hannah’s last days. She asks her conduit how to stop Spring. How to save her people. The conduit gives her this knowledge of the past. Hannah tells Meira that when she is ready she will know how to use the knowledge.

They take her to Spring’s capitol Abril and to Angra himself. She realizes that the Decay wasn’t passed down through the generations. It was always Angra. He is immortal. Meira surprises the king by being able to call forth visions when touching his skin. He sends her to the work camp where other Winterians have been locked away for sixteen years. She is locked up with siblings Nessa, Conall and Garrigan. She spends her days toiling at the wall and making friends with Nessa.

After a while she decides to do something. Something to give hope to the people. She makes a knife and slowly over several days brings down a work ramp on the wall killing many Spring soldiers. Afterwards a Spring soldier accuses her of causing the destruction but a Winterian boy defends her and gets lashes for it. Meira then touches him and has that same icy feeling that she has when she left Sir. To her, and everyone’s amazement, the boy is healed.

Once again she is brought to the king and he tries to trick her into telling her where her magic comes from through mind visions. Hannah is able to protect Meira from him and shows her the rest of her past. Meira is really Hannah’s daughter. Sir and his wife brought up Mather as Hannah’s son to protect Meira. Mather is Sir’s son. When the conduit broke when Hannah was killed, the magic went into Meira and is more powerful than ever. Meira is now the conduit.

Prince Theron comes to bargain for Meira’s life but finds himself a prisoner as well. They are both sent to be tortured by Herod. Luckily, Meira is able to kill Herod and she and Theron are able to get away. After a desperate kiss, Theron rejoins the Cordellian troops and Meira goes to save her people.

Meira slices her way through the guards and releases the Winterian slaves. They take up arms and head for the gates where the Autumn and Cordell armies are. Meira and Angra engage in hand to hand combat until Sir shows up…alive! Meira had healed him and didn’t know it. Sir fights Angra and eventually Mather breaks his conduit staff. Angra disappears in a cloud of Decay. Most think he is dead and gone but Meira knows better. She knows first hand that when a conduit breaks, the magic goes into the heir. There is rejoicing and the Winterians bow down to Meira. Mather seems happy and sad at once. His whole life has been a lie. The armies free the other Winterian work camps and then the Cordellians, including Theron and Noam, escort them home to Jannuari. To Winter.