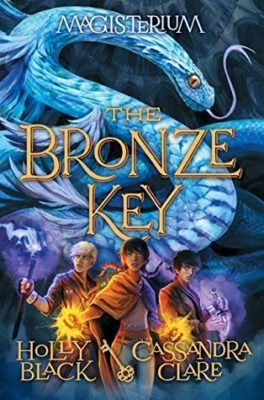 Callum Hunt has had a carefree summer, spent with his father, Alastair, and his best friend, Aaron Stewart. Call has almost forgotten the secret that only he and his friends know. The time is coming for Call to return to the Magisterium. Will his school year be as carefree as his summer?

Point of View
The book is written in third person from Call’s point of view.

Setting
The Bronze Key takes place mostly in the Magisterium, a school of magic. The magic has five elements: fire, water, air, earth, and chaos.

Main Characters
– Callum Hunt: the main character; he is a makar (user of chaos magic)
– Aaron Stewart: Call’s best friend; he is also a makar
– Tamara Rajavi: Call and Aaron’s friend; she always seems to choose Aaron over Call until the time it matters most
– Jasper DeWinter: Call, Aaron, and Tamara’s “frenemy”
– Master Rufus: Call, Aaron, and Tamara’s teacher at the Magisterium
– The Enemy of Death (Constantine Madden): the makar who caused the last mage war; the magical world thinks him dead

What happened in The Bronze Key?

Call and Aaron have spent the summer with Call’s father, Alastair. Soon it will be time to return to the Magisterium, but first the Assembly of Mages is throwing a party at the Collegium in honor of Call, Aaron, Tamara, Jasper, and Alastair. This is to recognize their part in the defeat of the Enemy of Death.

The night of the party arrives, and Call is nervous. At the party, a Gold Year named Jennifer Matsui gives Call a note. It’s from Celia, and she wants to talk alone with Call in the trophy room. Call goes to meet her, but when he gets to the trophy room, she is not there. When he is about to give up and return to the party, Aaron and Tamara find him in the trophy room. While the three of them are talking, the room’s large chandelier comes plummeting towards Call. Tamara pushes him out of the way right before it hits him. Aaron calls on his Chaos magic for protection. A moment later, the other partygoers burst in. At first, they are accused of playing with magic, but then the Magisterium masters realize the chandelier was an attempt to assassinate Call.

Not long after, they hear a defining scream and find Jennifer Matsui floating dead in the water surrounding the Collegium. Someone murdered her. After these horrifying events, it is assumed there must be a spy at the Magisterium.

The school year begins, and Assembly Member Anastasia Tarquin (Alex Strike’s stepmother) has come to keep an eye out for the spy at the Magisterium. Call, Aaron, and Tamara think that Warren, the elemental, might be the assassin. Master Rufus makes them promise not to catch the spy on their own. They don’t listen.

Call, Aaron, Tamara, and Jasper have a meeting at the library to discuss the spy. After the meeting, Call, Aaron, and Tamara find Warren to see if the elemental can lead them to where the large elementals are kept. Maybe they would know who released Automotones the previous year. Warren leads them to a large door engraved with the five metals of the Magisterium. He says they have to answer the “guardian’s riddle.” They get the door to open, and inside the room is Anastasia Tarquin. She wants to speak with Call alone. She is weirdly kind and gentle to Call. After the strange conversation, Call, Aaron, and Tamara return to their rooms.

The next day, Call tells the whole school he’ll be alone in the library. He’s trying to be bait for the spy. Celia turns up at the library. Call’s friends are hiding nearby, and when they hear talking, they rush into the library, magic at the ready. Call doesn’t know how to explain this to Celia. He starts to tell the truth, but then Jasper interrupts him. He says he came to the library to ask Celia on a date. She says yes.

Call goes back to his room, and an air elemental is waiting for him. It almost kills Call. Aaron and Call call up a chaos elemental and defeat the air elemental, Skelmis. Master Rufus finds out about the elemental. Call, Aaron, and Tamara are assigned to new rooms for their safety. They also go to a meeting with the masters and Anastasia. Anastasia explains how to get into the rooms where the large elementals are kept in order to prove how hard it would have been for a spy to break in.

Call, Aaron, and Tamara decide to try to talk to the large elementals. They figure out that Anastasia’s password to get the key to the elemental room is Jericho, the name of the Enemy of Death’s brother. They get Anastasia’s bronze key and break into the place where the large elementals are kept. There they find Marcus, the same elemental who made the creepy prophesies in their Iron Year. He says the spy is the greatest makar of Call’s generation. That would be impossible…The only two makars were Call and Aaron.

They also find Tamara’s devoured sister, Ravan. She asks them to free her, but they know that would be extremely dangerous. Not long after, they are discovered by the masters. At Anastasia’s request, Master Rufus makes them agree to apologize to Anastasia.

In the next day’s lessons, Alma comes to teach Call and Aaron about chaos magic. She teaches them how to see someone’s soul. That evening, Aaron, Tamara, and Call go to apologize to Anastasia. She wants them to help her and Alma rescue chaos ridden animals from the Assembly. She and Alma also think they can question the dead Jennifer about the night of the party. Call, Aaron, and Tamara agree to help with both.

The next day, Alma teaches Call and Aaron how to “soul tap” using chaos magic. This will knock someone out. That night, Call, Aaron, and Tamara go with Alma and Alex, Anastasia’s stepson, to rescue the chaos ridden animals. Things go horribly wrong. When Alma opens the truck the animals are in, they escape. Some of them attack. Call controls the animals and sends them back into the truck. Then he blacks out.

Call wakes up in the infirmary. His friends covered up their stunt with the chaos ridden animals. Call goes with Aaron and Tamara to contact the dead Jennifer. Tamara leaves to keep people from wondering where Call and Aaron are. Havoc goes with her. They talk with Jennifer’s spirit, and Call accidentally reanimates her body. He makes her chaos ridden. Anastasia and Alma say they will take care of it and make Call and Aaron leave. Alex finds Aaron and Call and says he needs their help.  Tamara was kidnapped by the spy.

How did The Bronze Key end?

Alex leads Aaron and Call into the woods surrounding the Magisterium. Alex’s story starts to sound suspicious. Call realizes Alex is the spy. Alex has the Alkahest. If he kills Call or Aaron with it, then he will get their makar abilities. Tamara shows up with Havoc. Alex is ready to kill Call, Aaron, or both. A bolt of bright light shoots from the Alkahest, and Tamara pushes Call out of the way. It hits Aaron, killing him. Alex gets his powers and then escapes with the Alkahest. The masters arrive. Alma is with them, and she accuses Call of killing Aaron and of being The Enemy of Death reborn. Call tells them it was Alex who killed Aaron, but he can’t deny that he’s the enemy of death. Call is put in chains.

The book ends with Call in the Panopticon, the prison of the mages. Anastasia comes to visit him. She says that she was Constantine and Jericho’s mother, which would make her Call’s mother. She wants to help Call and save him. She says she will set him free.

There you go! That’s what happened in The Bronze Key, the third book in The Magisterium series. The fourth book, The Silver Mask, will be released in 2017!

Ready to pre-order The Silver Mask? Click to buy and help us pay for hosting.

Friend/Follow us on Goodreads: Sara and Stacy.

Check out our Magisterium Pinterest board for awesome art and book quotes.

44 thoughts on “What happened in The Bronze Key? (Magisterium #3)”