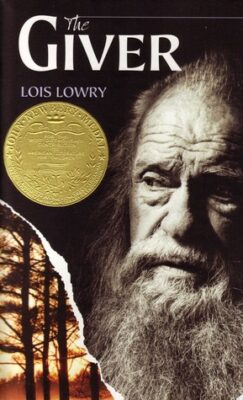 Read a full summary of The Giver, written by Lois Lowry, right here! This page is full of spoilers, so beware. If you are wondering what happened in The Giver, then you are in the right place!

Special thanks to Fiona Li, a new BSR contributor who wrote this great recap!

What happened in The Giver?

The Giver is beyond well known, and you may have read it once or twice in your life. It is a well-written dystopian novel by the famous Canadian author Lois Lowry. The author’s own father’s memory loss inspired her to write this book.

The story is set in a wonderful world free from crimes and sadness, where every citizen treats each other with kindness. The main character is Jonas, a boy who lives in this community and who just turned twelve. In his world, elders assign jobs to all children at the age of twelve. The elders choose everything for the citizens in this community—from their partner to their kids to their housing. No one resists or protests about this control because the citizens believe the elders always make the right choice. They are just used to this way of living.

Jonas lives with his father, a new child Nurturer, his mother, a Department of Justice worker, and his seven-year-old sister Lily. Jonas is a well-behaved citizen and an excellent student, but he is unique in a couple of ways. He has pale eyes, while most individuals in his town have dark eyes, and he possesses exceptional skills of observation. Objects “change” as he stares at them. He is not aware of it yet, but he is the only one with this ability to see flashes of color. For everyone else, the world is devoid of color just as it is devoid of pain, hunger, and annoyance.

At the beginning of the novel, Jonas worries about the upcoming Ceremony of Twelve, the annual ceremony at which the elders will assign his formal role as a new adult member of society. He does not have a certain professional interest, although he likes volunteering in a range of occupations. Jonas is special, however, and is chosen as the Memory Keeper, one of the most principled jobs in his community and certainly the most honorable one.  There is only one Memory Keeper, and his job is to keep memories from the past—whether it good or bad, happy or sad. The society has been strictly blockaded from many things to prevent the risk of its members being unlucky and sad.

In Jonas’ new role, the Giver sends memories to him by laying his hands on his bare back. His earliest recollection is of an incredible sled trip. As Jonas gets memories from the Giver—memories of pleasure and pain, extreme cold and warm sun, excitement and dread, and hunger and love—he discovers how monotonous and meaningless life in his community truly is. Jonas’ life is richer and more meaningful as a result of his memories. He wants to share that richness and significance with the people he cares about.

However, in exchange for their calm life, the members of Jonas’ society have lost the ability to love or feel great emotion about anything. They cannot understand true hardship because they have never experienced it. They are also unable to feel the true joy of life, and the lives of others appear less valuable to them. Furthermore, no one in Jonas’ community has ever made a decision on their own.

Jonas becomes more irritated with his community members, and the Giver, who has felt the same way for many years, encourages him. They became very close, much like a grandpa and a grandson may have done before Sameness, when family members kept in touch long after their children had grown up.

Meanwhile, Jonas is assisting his family in caring for a problematic new child, Gabriel, who is having difficulty sleeping through the night at the Nurturing Center. Every night, Jonas sends soothing memories to the youngster. He begins to form a relationship with Gabriel that mirrors the family relationships he has experienced through the memories.

Jonas learns the Nuturing Center is preparing to release Gabriel. The Giver informs Jonas that release is the same as death. Jonas’ anger and dismay at this discovery inspire the Giver to help Jonas create a plan to completely transform things in the village. The Giver tells Jonas about the girl who was chosen as the new Receiver ten years ago. She was the Giver’s own daughter, and her name is Rosemary. The Giver and Jonas create a plan for Jonas to flee society and enter Elsewhere. After this, his bigger supply of memories will disseminate, and the Giver will help the people come to terms with the new feelings and thoughts, forever transforming their society.

When Jonas’ father informs him that Gabriel will be released the next day, Jonas is obliged to depart sooner than expected. Jonas steals his father’s bicycle and a supply of food and sets off toward Elsewhere, desperate to save Gabriel. He gradually enters a scene brimming with color, animals, and changeable weather, but also with hunger, danger, and tiredness.

Jonas and Gabriel travel for a long time, avoiding search planes, until thick snow makes bike riding impossible. Jonas climbs a high hill, half-frozen, but comforts Gabriel with memories of brightness and companionship. At the top, Jonas discovers a sled—the sled from his first transferred memory—waiting for him. Jonas and Gabriel enjoy a thrilling downhill ride on the sled. They see—or believe they see—the glittering lights of a pleasant hamlet at Christmas ahead of them, and they hear music. Jonas is certain someone is waiting for them.

A note from Fiona Li: The Giver is a short novel you can finish in a day, yet it has deep meanings within it. It is a book suitable for all ages. After reading it twice, I learned many hints the author had hidden in her own passages as well as her views of the world. I discovered it is much more complex than the average children’s book.

There you go! That’s what happened in The Giver. We hope you enjoyed this The Giver summary with spoilers.

Ready to read The Giver? Click to buy an

d help us pay for hosting!

5 thoughts on “What happened in The Giver?”