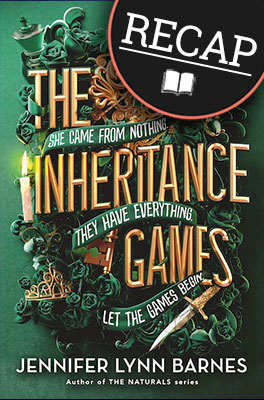 Ratings
4.6 stars on Amazon
4.17 stars on Goodreads
Add The Inheritance Games at Goodreads.

What happened in The Inheritance Games?

Avery lives in Connecticut with her sister Libby after their mother died. Libby’s abusive boyfriend, Drake, moves in, and Avery decides to live in her car for a while. Avery is broke most of the time, but she’s a brilliant student and helps others whenever she can.

Avery is called into the office at school, where a boy named Grayson waits for her. He informs Avery that her presence is required at the reading of his late grandfather, Tobias Hawthorne’s will. Avery has never met the man, but she and Libby travel by private jet to Hawthorne House in Texas.

When Mr. Hawthorne’s attorneys read the will, Avery learns that he left only pocket change to his two daughters (Zara and Skye) and four grandsons (Grayson, Nash, Jameson, and Xander) compared to the 48 billion dollars left to Avery. Not to mention his extensive properties and possessions. The one condition Avery must abide is to live in Hawthorne House for at least one year, and she must not kick any member of the Hawthorne family out.

Avery moves in and starts school where the boys attend. While there, a girl named Thea tells Avery to be careful. The last girl (Emily) who lived in that house with those boys died.

Avery and the others think there may be clues in Tobias’s letters to them. Clues and riddles were something Tobias loved. She and Jameson begin searching for clues together, and Grayson warns Avery to be cautious with Jameson.

They discover that Tobias didn’t have a middle name though he signed the will with one, Tattersall, which looks more like tatters all in his signature.

Libby’s boyfriend Drake shows up, bringing the press with him. Avery tells the reporters not to run a story about Drake, or she won’t tell them why Tobias chose her to inherit. She implies that she knows why, though she doesn’t. The press goes crazy speculating what Avery knows.

A copy of Tobias’s will is written in red ink, and Avery takes a look. Through it, she realizes that the grandsons all have middle names that point to a place on the Hawthorn property.

The middle name “Westbrook” leads Avery and Jameson to a bridge over a brook that runs through the grounds. They find a hidden number 8. The name “Blackwood” leads them into the forest, where they find an engraved tree trunk. “Tobias Hawthorne II,” it reads. Tobias Hawthorne II, Toby, was Tobias’s son who died many, many years ago. While there, someone shoots at Avery and Jameson. Scraps of bark scrape Avery up, but otherwise, she’s okay.

Oren escorts them back to Hawthorne house, but they decide to keep the shooting a secret.

How have your tastes in books morphed over time? S

How many books are on your Goodreads Challenge for

An event has been planned for Avery to attend, so Alisa and Oren take her dress shopping. On their way home, a car crashes into them. Oren used Avery as bait to provide Avery’s enemy another chance. The driver turns out to be Libby’s ex, Drake. They believe it was Drake who shot at them, but who let him onto the property?

Avery solves more clues. She finds a “1” on a Winchester rifle. A “0” visible in the Blackwood forest from a helicopter, and another “1” in a Davenport desk. The numbers make Avery’s birthday, October 18th (10/18). But they also indicate the day of Emily’s death. This upsets Jameson, and he says he doesn’t want to play the game anymore.

It turns out that before her death, Emily was stringing both Jameson and Grayson along. Jameson found out about it and broke up with her. That same night she talked Grayson into taking her cliff diving. Emily died from her preexisting heart condition. Grayson blames himself because he took her on the outing, and Jameson blames himself because he followed them and stood by when she was dying. He did nothing to help her because he thought she was being dramatic as usual.

Avery discovers that Drake was working with Skye, Grayson’s mother. Grayson deals with it by kicking her out of the house.

How did The Inheritance Games end?

Everyone must be present to unlock the final puzzle in the tunnels under the house. Avery is required for facial recognition, and all four boys’ are needed for handprints. They open the box by unscrambling “Avery Kylie Grambs” into “A very risky gamble,” and everyone gets a new envelope from Tobias. It seems Tobias was trying to give the boys a reason to make up after Emily’s death tore them apart.

The contents of Avery’s envelope remind her that she met Tobias once in a restaurant when she was a child. He must have kept up with her because there are many photos of her in the desk in her room.

When Avery sees a photo of Tobias’s late son Toby, she realizes that it is Harry, a homeless man that Avery played chess with in the park. Tobias Hawthorn’s firstborn son is not actually dead.

It turns out that Xander helped the others along with the game at his grandfather’s request. His letter from the man tells him to find Tody.

Ready to read or reread The Inheritance Games? Click to buy and help us pay for hosting! (paid links)