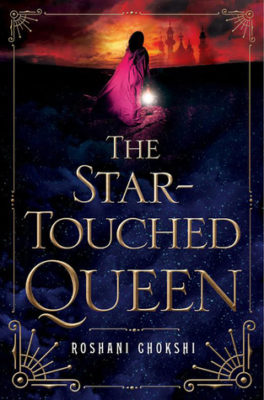 What happened in The Star-Touched Queen?

Mayavati is a princess of the Raja of Bharata. She has been cursed, and it is somewhat of an outcast because of it. She is able to easily get away from her tutors because if they are superstitious, they are afraid of her. One of them even sees something in her that frightens him. She is confused by his reaction. She overhears a conversation that her father is going to give her in marriage to a rebel leader.

She plans to escape but is locked in her room. She has a sister Gauri who she adores, but there is no one else here that she loves. Just before her wedding her father comes and says that she is to commit suicide before the marriage because war is coming anyway and avoiding the marriage will avoid war in his mind. While in her room she is visited by a strange being that seems familiar to her. Mayavati cannot place her and then she is gone.

At her wedding when left alone to decide which man to choose as her husband, she is supposed to kill herself.  She, however, is saved by a boy named Amar.  Soldiers have snuck into the city, and fighting begins.  She chooses him as her husband, and they leave together without anyone knowing.  He takes her to the Night Bazaar.

Amar is Raja of a realm between hers, the human world, and the Otherworld called Naraka. He wants a strong partner by his side though he won’t reveal his identity or tell her anything until the new moon, a month anyway. His realm is weak now. He always wears a hood low over his eyes to hide from her.

He shows her a tapestry that represents people and says it is how they keep the border between the human world and the otherworld safe.  Amar’s advisor is a nervous man named Gupta. Their world is void and empty and lacks court etiquette.

There is some secret that they are bound not to tell her until the new moon. She sees a chained door and hears a voice calling to her to help. But when she looks again, it is gone. She tricks Gupta into letting her roam around. She finds a twinkling garden and Amar finds her and warms her of the dangers. They are fighting to trust each other. He finally shows her his face.

Mayavati becomes aware that there are no other living things in the court.

Amar tells her the tale of a man who has two threads on the magical tapestry of time. It is Mayavati’s job to decide which thread to pull and decide his fate. Both were bloody. She did not want the job but finally made a decision. She was unable to actually pull it because of doubt.

She finds that she had great power that is slowly unlocking. She and Amar practice together.

One day they send her to her room after some strange sounds. She sneaks out and sees the dead walking the halls. Amar is the Raja that ushers the dead on to their next place, passing judgment on them. Mayavati sees a reincarnation pool. She finds her father locked away in a cell serving a punishment. After talking with her father, she learns that it has been ten years since she left her wedding.

Amar pulls strings on the tapestry, deciding fates.  Mayavati eventually finds the chained door. She goes inside and someone she thinks she should know is there. The girl, Nritti, says that she has been looking for her.  She says that long ago Amar took Mayavati, but later she found her way to the reincarnation pool and escaped. She was born again in Bharata.  Mayavati sees in her memory tree that Amar has been watching her since she was a child.  He also is seen with another woman.

Nritti convinces her to steal away his noose which is in the form of a leather bracelet. Mayavati does, and she gives it to Nritti.  The memories from the memory tree begin a to break away into nothing. Amar comes in shocked and Nritti gives Mayavati a knife, and she then plunges it into the tree-destroying the memories. Amar says he had put many of his own memories into the tree. As they are burning Mayavati sees that Nritti was only telling partial truths.

Mayavati had actually long ago fallen in love with Amar and he with her.  She became queen at Amar’s side. But something happened years later, and she entered the reincarnation pool. She saw a memory of Amar telling Gupta that he had to find Mayavati and bring her back. He didn’t know where she would be reborn, but he would follow the horoscope.

After seeing this, Mayavati saw that Amar was fading and he said, “save me.”

The next thing Mayavati knew she was waking up in her own grave in Bharata.  A horse of death named Kamala, found her and they made a bargain.  The horse agreed to take her to the Night Bizarre.

After some setbacks, they had to travel to Bharata in the hopes that Amar would arrive. While there Mayavati decides to help her sister Gauri who is now grown up. She wears armor and is fighting alongside their lazy half-brother. Gauri wants to do the right thing in this war, but her brother will not allow her.

The horse says that Amar was there for a moment then gone again.

Gauri allows Mayavati, who she doesn’t recognize, help her. Guari sends mother Dhina, who once was Mayavati’s guardian, to aid Mayavati in her plans.  Mayavati forgives her, and they start a fire allowing Gauri to escape and go to the front lines as she wanted.

How does The Star-Touched Queen end?

The horse, Kamala, and Mayavati leave the city but run across Nritti on their travels.  The woman is sucking the youth from children for her wedding to Amar. She summons him, and suddenly he is there. He seems different—like he is Nritti’s pet.  Nritti still holds his noose. The two of them along with the children return to the otherworld. Mayavati wants to get there too, and Kamala says that she should bury her last memory from the memory tree in the ground. She does and a hole forms that takes them there.

Amar does not recognize her. She solves a riddle in exchange for freeing one of the children as well as a private audience with Amar. She gets it but is thrown behind bars. Amar meets her there and remembers her only when Mayavati puts a thread of her hair on his wrist. Nritti comes in a takes control of him then stabs him in the chest with a knife. Instead of going to Amar, Mayavati runs for a glass mirror and escapes to Naraka.

Here she is able to gather all of her lost memories. Long ago Mayavati had punished Nittri’s lover, and the other woman has never forgiven her.  Nittri began planting lies against Amar in Mayavati’s mind—in the exact same way she had done recently to convince Mayavati to give her Amar’s noose. Mayavati gains her power back and is reunited with Amar.

They go back to the Night Bizarre and together entrap Nittri, defeating her.  Kamala asks to say by Mayavati’s side, and Mayavati becomes queen of Naraka once more.

Ready to buy A Crown of Wishes?  Click to buy and help us pay for hosting.