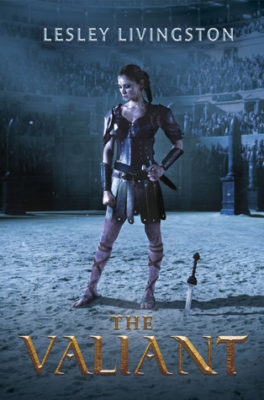 Read a full summary of The Valiant by Lesley Livingston now!  This page is full of spoilers so beware. If you are looking for a spoiler-free review check our rapid review of The Valiant.  If you are wondering what happened in The Valiant, then you are in the right place!

Ratings
4.3 stars on Amazon
3.88 stars on Goodreads
Add The Valiant  at Goodreads

What happened in The Valiant?

Princess Fallon, daughter to Virico, the king of the Cantii tribe, is destined to be a warrior like her sister Sorcha, who was killed on a mission to rescue their, then captive, father. They reside in Prydain and Rome is their enemy.

Fallon is in love with her long time friend Mael who is the brother to the new king of a neighboring tribe, Aeddan. Mael asks Fallon to marry him but she says no for now. She wants to be a warrior first.

At a public celebration where Fallon had believed her father was going to name her as a warrior for the tribe, he publicly betroths her to Aeddan instead. Fallon tries to talk Mael into running away but his honor demanded that he confront Aidan instead. Fallon runs away on her own but as she does she witnesses Aeddan murder Mael. She runs but is picked up by slavers and stashed away on a boat.

She meets a girl that she reluctantly becomes friends with named Elka. Together they prove that they are both fighters. The slaver, Charon, knows that they will fetch a good price. On the way to Rome, they pick up an escort of Legionaries, led by Caius (Cai) Varro. They prove useful when pirates attack. Varro even saves Fallon’s life and Fallon saves Charon’s.

When they finally make it to Rome, a training center for women purchases Fallon and Elka.  It is owned by none other than Julius Caesar, Fallon’s ultimate enemy. She will fight in an arena. When she arrives she finds that there is animosity among some of the groups of gladiatrices.

Cai visits Fallon often because he is curious about her. He knows she was free born. She blurts that she is the daughter of a king. He tells her that the head lady of the training center bought her only after she saw her sword with the raven carved on it. He is wondering what game she might be a part of. He says that he is one that keeps Caesar’s friends from turning on him.

Fallon is tested harder than any of the others. Eventually, she makes it to the ceremony that makes her an official gladiatrix. At the ceremony she learns that the leader of the training facility is actually her sister, Sorcha, who she had believed to be dead. She is conflicted with emotions, furious that her sister abandoned them but also happy to be reunited. Her sister awards her her own sword back (it was she that paid an outrageous price for Fallon when she saw the sword) and she also gives Fallon her own sword that is its twin. Sorcha warns her to keep it a secret that they are sisters. The money that Sorcha paid for Fallon was going to go toward buying the training facility and allowing the gladiatrices to be free women.

Cai proposes that he buy Fallon because he does not want her to die and he cares for her. She is angry at the thought of being purchased for money yet again. She refuses.

Sorcha is good friends with Cleopatra and she is the only other that knows that they are sisters.

The gladiatrices go on a tour of the cities around Rome fighting in small tournaments. Cai and his men escort them. During Fallon’s first battle she kills a woman known as The Fury. She begins making a name for herself and is now called Fury Killer. She and her vicious rival Nyx are both chosen to interview with Caesar to see which will be his champion.

Threats are made against Fallon and Sorcha fears for her life. She tells her that she will withdraw. Fallon is angry and allows Nyx to lure her to a party held by The Collector, Aquila. He has long been obsessed with Fallon. She learns that there is a group that believes devouring the flesh of the warriors will give them strength. She is almost caught but gets away with the help of Aeddan, who is now in exile and must fight as a Gladiator to pay his debts.

Fallon makes a promise to Cai that, should she buy her freedom, she will come to him.

How does The Valiant end?

After Fallon and Nyx interview with Caesar, he choses Fallon as his champion. She will fight as a Roman soldier in his reenactment of Rome conquering her homeland. A competing training facility purchases Nyx and she will play the part of Fallon’s goddess, Morrigan.

They fight in the arena as Caesar and the fickle mob watches. Aeddan is fighting opposite Fallon and her sisters. Fallon very nearly loses herself as she seeks to kill Aeddan. She has her opportunity but can’t do it. The mob falters. Fallon calls on Aeddan to drive a chariot as she takes on Nyx. In the end, Fallon and her sisters win, though Nyx is not killed. She completely wins the favor of the mob. Fallon earns a great sum of money but she gives it to her Sorcha and the training facility. She also requests that Nyx is freed. She asks Caesar if she can continue to fight for him in the games.

There you go! That’s what happened in The Valiant. Hope your enjoyed this recap of The Valiant with spoilers.

Want to buy The Valiant or The Defiant?  Click to purchase and help us pay for hosting!