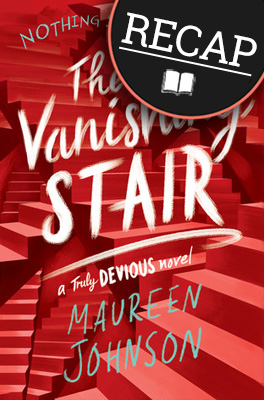 Special thanks to Susan Jensen, a BSR contributor, who wrote this great recap! Visit her blog to check out what she’s reading and see what’s on her mind. See the end of the recap for links to her Goodreads and Facebook accounts.

Ratings
4.6 stars on Amazon
4.21 stars on Goodreads
Add The Vanishing Stair at Goodreads.

What happened in The Vanishing Stair?

Francis often sneaks out at night to spend time with her boyfriend and fellow Ellingham student, Edward Davenport. The two aim to be the next Bonnie and Clyde. As a starter, they write the “Truly Devious” letter to Albert Ellingham as a joke.

On the night Dottie Epstein is killed, Francis and Eddie secretly observe Albert and Miss Nelson—the housemistress of Minerva, where Francis lives—embracing in the gymnasium building, which is under construction. A worried Albert gives Miss Nelson a gun and tells her to protect herself and the students as all of them vacate the school. In a later chapter, it is revealed that Albert and Miss Nelson were having an affair.

Stevie Bell is back home in Pittsburgh because, after Hayes Major’s death and Stevie’s involvement in the case, her parents no longer deem it a safe place for her. Stevie has the old tin she found in Ellie Walker’s room and is still trying to figure out who owned it as well as the significance of what she found inside. Particularly, she is trying to figure out the identities of Frankie and Edward, the two people mentioned in the poem she found inside the tin.

Stevie is shocked when Edward King—the scummy senator her parents adore and the father of David Eastman, the infuriating boy with whom Stevie is enamored—visits her home. She’s even more surprised to find he has convinced her parents to let her return to Ellingham. Not so surprisingly, Edward wants something in exchange. He tells Stevie he needs her to secretly keep an eye on David and make sure he is okay and is not making trouble. Stevie is uncomfortable with the deal, but she agrees to it so that she can be at Ellingham again.

On one of her first days back, Stevie meets with Charles Scott, the head of the school. She notices an antique clock on the mantel in his office, which Charles says belonged to the Ellinghams. Charles tells Stevie he has arranged for her to become a research assistant to a local professor, who is an expert on the Ellingham case.

While looking at old Ellingham yearbooks in the school library, Stevie finds pictures of Francis Crane and Edward Davenport and knows she has found “Frankie and Eddie.” They wrote the “Truly Devious” note; could they also be responsible for the kidnapping of Iris and Alice Ellingham? Stevie can find few records of what happened to Francis, but she finds a Wikipedia article indicating that Edward, a poet, committed suicide in Paris in 1940.

Stevie meets Dr. Fenton in Burlington, and they discuss the Ellingham case. Dr. Fenton asks her to look for a number of objects from an extensive list since Stevie has access to the Great House attic, where such relics are stored. Stevie also meets Hunter, Dr. Fenton’s nephew. He attends college in Burlington and lives with his aunt.

As she rides home, Stevie is thinking about Ellie’s strange disappearance. Although it’s widely assumed she killed Hayes Major, David doesn’t think it makes sense. Stevie doesn’t either. She asks Larry, Ellingham’s security guard, to show her the place from where Ellie vanished. Larry takes her to the basement of the Great House to show her the window through which Ellie escaped.

Stevie returns to Burlington to report to Dr. Fenton. The professor lives in a very messy, cluttered home that smells strongly of alcohol and cat urine. Stevie and Dr. Fenton go over transcripts and records from the original case. Dr. Fenton shows Stevie notes about a discrepancy in the reports involving a suspicious telephone call to the Ellingham mansion on the day Iris and Alice Ellingham were taken. She also tells Stevie there is a secret tunnel in Minerva House.

On Halloween night, Stevie, David, and Nate look around Minerva for a tunnel. They find one under the staircase. Stevie and David go inside while Nate stands watch. Inside, David reveals personal information about himself to Stevie that makes her feel especially guilty about her secret deal with his dad. She knows she should tell him the truth about the deal, but she doesn’t. They kiss.

As they are heading out of the tunnel, they discover Ellie Walker’s dead body. Not wanting anyone else to get in trouble, David tells Stevie and Nate to go back to their rooms and he will take full responsibility for finding Ellie.

Later that night, Stevie and David talk. He finds out about her deal with his dad and is furious about it. Stevie feels terrible. She also wonders if her deal with Edward King will be off if David knows about it. After their conversation, David ignores Stevie completely.

Dr. Fenton and Hunter visit Ellingham to meet with Stevie. While Stevie gives Hunter a tour of the campus, he tells her Dr. Fenton believes there was an addendum to Albert Ellingham’s will that stipulates whoever finds Alice Ellingham (whose body has never been found) will inherit a large fortune as long as they are not members of the school board and had nothing to do with her disappearance. Hunter feels that Dr. Fenton is using Stevie in order to find Alice and receive the massive reward.

Larry, the security guard, lets Stevie know he has been fired and is leaving Ellingham immediately. He tells her to be careful and to call him if she needs him for any reason.

Before Albert Ellingham goes out on his boat the day he dies, he places a folder of legal documents in his desk. One stipulates $10 million is to be given to the person or organization that finds Alice Ellingham, providing they were not involved in her disappearance. If it does not happen by her 90th birthday, the funds go to Ellingham Academy to be used by the school’s board in whichever way they see fit.

Albert wants the offer advertised to the world so everyone will be looking for his daughter. Robert Mackenzie, Albert’s secretary, thinks the reward is a very bad idea as it will bring all kinds of crazies out of the woodwork. Albert insists it must be done.

Albert invites George Marsh—his friend and a former police detective whom he hired to solve the murder of his wife and the disappearance of his daughter—to go sailing with him on his boat. Albert tells George he has rigged the boat to explode. If George doesn’t want to die, Albert needs to tell him the truth about what happened to Iris and Alice.

George confesses he needed money to cover a huge gambling debt. He planned the kidnapping in order to get the money he needed from Albert without Albert knowing it was him. The simple plan went awry. Dottie saw George. When he threatened her, she jumped into a hole, hit her head, and died. Then the thugs George was working with wanted a bigger cut of the ransom money. They killed Iris against George’s wishes.

George says he knows where Alice is, but before he tells Albert anything, George lights a cigarette and the boat explodes.

Stevie goes to Burlington to see Dr. Fenton. The professor is not home, but Hunter lets her into his aunt’s office. He shows her the manuscript of Dr. Fenton’s book, which contains notes from an interview she conducted with Robert Mackenzie. A note says Mackenzie told Dr. Fenton the last thing Albert Ellingham said to him was, “It was on the wire.” Stevie goes on a walk with Hunter. She is shocked to see David being beat up by a group of teenagers. One of them is recording the fight on David’s phone. Stevie is confused because David seems entirely nonplussed by the event. He tells her he paid the kids to punch him. Then he uploads the video to YouTube. David will not tell Stevie why he’s done this, only that he is not returning to Ellingham and that he has his own plan that does not include her. He stalks away, obviously still furious with her.

How did The Vanishing Stair end?

Back at school, Stevie goes up to the attic of the Great House, where relics from Albert Ellingham’s life and estate are stored. She finds an old machine, which contains a recording of an interview Albert did with Dottie Epstein. What she hears leads her to call Dr. Fenton. When the professor answers, it’s obvious she’s drunk. She says she can’t talk now because “The kid is there,” which makes no sense. Stevie tries to call back, but Dr. Fenton doesn’t answer.

Stevie’s worried, so she calls Larry and asks him to check on the professor. He discovers Dr. Fenton’s house was on fire and she died in the blaze. Hunter was discovered in the house, but Larry doesn’t know anything about his condition. Although the police think the alcoholic woman accidentally started the fire, Stevie doesn’t believe it.

The book ends with Stevie contemplating the new security cameras Edward King had set up all over campus, the cameras that see everything.

Ready to read or reread The Vanishing Stair or other books in this series? Click to buy and help us pay for hosting! (paid links)