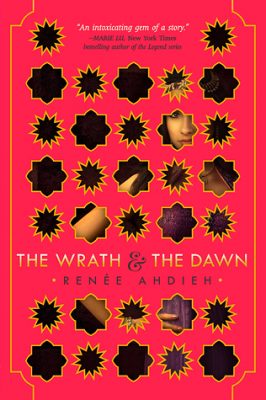 Ratings
4.5 stars on Amazon
4.24 stars on Goodreads
Add The Wrath and the Dawn at Goodreads

What happened in The Wrath and the Dawn?

Shahrzad volunteers to become the next bride of King Khalid even knowing that her life will be forfeit. Every day he marries a different girl, and she is dead by morning. Shahrzad’s friend Shiva has already died at his hand. Shahrzad has sworn that she will avenge her friend’s death.

Shahrzad’s father, Jahandar, and her sister flee to the home of Tariq, Shahrzad’s childhood sweetheart. But Tariq has already left with his friend Rahim to see if he can stop her death.

On Shahrzad’s wedding night, Khalid comes to her near dawn, and she begins telling him an exciting story. When dawn arrives, she stops and refuses to finish until the next night. He grants her one more day.

I give it 4.75 stars overall.
Let’s be friends on Goodreads:

The next morning a handmaiden named Despina readies her for the day. Shahrzad makes her way to the training grounds and requests that Jalal, Captain of the Guard teach her to shoot a bow. She pretends not to know how though she is very skilled with the weapon.

The second night Shahrzad again tells her story to the king. In the morning, they come to get her, but Khalid hesitates and once again allows her to live.

Tariq and Rahim arrive in Rey at his uncle Reza’s house. Reza is the father of Shiva, Shahrzad’s dead best friend. After Shiva died, her mother killed herself.

Shahrzad and Despina sneak into a swordsman contest and witness first hand how talented the king. When caught by the General, he threatens her telling her that she is a threat that must be eliminated.

Khalid doesn’t come to her that night, but guards wake her at dawn and wrestle her to another location. They cover her face and hang her. As she is about to pass out, there is a commotion, and she is released. Khalid and Jalal save her.

Afterward, Khalid tries to make amends Shahrzad’s heart battles between hatred and growing affection for him. He is not what she had thought he would be.  Khalid leaves that day for a week to travel to Amardha.

Tariq, Reza, and Rahim are planning to find followers to help them put an end to the violent King. While Khalid is traveling Uncle Reza wants them to make plans, go back home, and find followers. But Tariq has his own plans.

Musa, Khalid’s former tutor, pays Shahrzad a visit. He tells her how Khalid’s mother had an affair and his father killed her in front of him when he was only six. He cannot reconcile the monster Khalid has become, with the boy he knew. The tutor suggests that Shahrzad has the “gift.”  She admits that her father has some small powers.

Tariq meets Omar, a leader of the Badawi people and hopes to ask these nomadic people for help in defeating King Khalid.

Shahrzad talks Khalid into joining her into the city dressed as commoners. She plans to poison him. A drunk man insults her, and a fight breaks out. They run away but the pursuers catch up to them, and Shahrzad is forced to show Khalid her archery skills. They kiss and she is angry at her heart for betraying her in this way.

Khalid is having terrible headaches as a result of his not killing Shahrzad at dawn like the other girls. His uncle thinks he should go through with it.  After all, she is only one girl.  Khalid refuses.

Shahrzad finds out that Despina is pregnant with Jalal’s baby.

Shahrzad practices archery and swordsmanship with Jalal. Even her bodyguard helps her. Everyone seems to be warming to her.

She no longer believes the rumors about Khalid but wants to find out why the other girls had to die. Khalid is still suspicious of her for volunteering. He is searching for her family to find answers.

When Khalid comes to her that night, things are different. They both know they are reluctantly falling for each other. But she ruins the moment by asking him directly why the others had to die. He shuts down completely after that and leaves.

Jahandar, Shahrzad’s father, has a secret, ancient manuscript that he is translating. He uses the magical book to perform a spell on himself and afterward he feels renewed and powerful. His magic is great. He asks Rahim if he can join their rebel band.

The Sultan, Salim, Khalid’s uncle, is visiting and Khalid invites the noblemen of the land come and meet his queen. Tariq is among the nobles that arrive for the festivities. Khalid believes that Salim is looking to take over Khalid’s right to the throne.

Yasmine is the daughter of Salim, and she dances at the banquet for Khalid. Shahrzad’s jealousy rages.

Tariq sneaks to her balcony to see Shahrzad. He assumes she is still looking for a way to kill Khalid. But later he sees Shahrzad and Khalid embrace, and he realizes that they may be in love with each other. Khalid sees the way Tariq watches her and asks Jalal to find out everything he can about Tariq. Tariq returns to Omar after that.

Despina and Shahrzad find that the carpet given to her by Khalid’s tutor displays magic when she touches it.  It floats.

One night intruders enter Shahrzad’s bedchamber. Despina is able to call for help, and Khalid and Jalal come to their rescue. One of the intruders lives. He is a hired mercenary and says that he was sent by “someone who knows.”

Shahrzad is taken to Khalid’s rooms after that. Khalid leaves to attend to the investigation, and Shahrzad is able to snoop around. She finds a stack of letters that Khalid has written to the family of each dead wife. He is very sorry, but it confirms that he did, in fact, kill Shahrzad’s best friend, Shiva. There is also a letter that he wrote to her that he never completed.

Shiva’s father, Reza meets up with Salim, the Sultan.  They share Khalid as a common enemy.  Shiva’s men bear the same mark that the men had that broke into Shahrzad’s room.

Khalid finds out that Shahrzad and Tariq are connected.  Jalal begs him to let her explain. He goes to her and offers himself to her to kill for killing her friend. She refuses, and they spend the night together. In the morning, he brings her a perfect rose from the garden.

How did The Wrath and the Dawn end?

Khalid eventually tells her about the curse that was placed on him by his late wife’s father.  The father believed that it was Khalid’s fault that she killed herself and he cursed Khalid so that he would be forced to kill one hundred wives for the one he took.  Not complying means not only that Khalid can’t sleep but that the city will also be taken from him.  In the past when he tried to resist there was a great famine in the land as a result.

Khalid again must leave Rey because a small force is gathering at the border under a new banner.

Jahandar completes spells from his book to make himself even more powerful. He creates a lightning storm as a diversion so that Tariq and Rahim can sneak in to steal Shahrzad away.

Shahrzad agrees to go with them only so that, once she gets them to safety, she can tell them why she can’t leave. She grabs her magic carpet and when they reach the stable Jalal is there. He says he trusts Shahrzad and her love for the king but tells them to leave anyway. The city is burning and they think it may be because of the curse. Shahrzad leaves with them to meet her father. Jalal tells Tariq to never let her return.

It ends with Khalid burning a second letter that he wrote to Shahrzad. He still loves her as much as ever.

A few questions to discuss….Do you think the letter will show back up?  He caught it on fire and let it float away.  Do you think Jalal tells Khalid his involvement in sending Shahrzad away? Will Shahrzad fall for Tariq again while they are together?  Is the rain really related to the curse? Tell us what you think in the comments!!!

Ready to read The Rose and the Dagger?  Click to buy and help us pay for hosting.

11 thoughts on “What happened in The Wrath and the Dawn?”