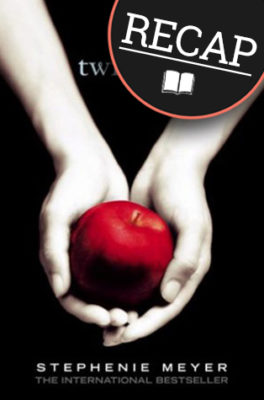 Read a full summary of Twilight, book #1 in Stephenie Meyer’s Twilight Saga. This page is full of spoilers, so beware. If you are wondering what happened in Twilight, then you are in the right place!

Since Stephanie Meyer penned a new book in the Twilight universe, we thought you might like to read a quick recap of her first novel in the series. Below is a recap of Twilight. Midnight Sun, released August 2020, takes a look at Twilight from Edward’s perspective.

Here are the events from Bella’s point of view:

What happened in Twilight?

Bella moves to Forks, Washington to live with her father, while her mother travels with her new baseball player husband. Bella starts school, and though she claims to be the boring type, she attracts the attention of everyone at school. On her first day, she finds a few new friends who she sits with at lunch and asks questions about a group of beautiful, pale students who keep to themselves. They are the Cullen Family, adopted kids of Doctor Cullen, the physician in town.

One of the Cullens, Edward, is in her Biology class. The only open seat is next to him, and he acts very strangely. He glares at Bella and sits as far away from her as possible. It’s as if he can’t stand being near to her.

Bella is nervous about returning to class the next day, but when she does, she finds that Edward is a no-show. He skips the rest of the week, and Bella can’t help but wonder if it is because of her.

But, Edward is back in class after the weekend, and he has suddenly decided to be civil to her.

Later Bella is invited to La Push beach, where she meets Jacob Black, and he tells her the myth about the Cullens. The Cullens are said to be enemies of his tribe, the Quileutes, who are descended from wolves. The Cullens are known to them as the cold ones.

A few boys ask Bella to the school dance, but she deflects them. She does, however, go out-of-town dress shopping with a few friends. While there, she wonders off on her own and is approached by a few creep guys. They won’t leave her alone, but Edwards shows up and whisks her away in his car.

Bella lets her friends know that she is going to ride back to Forks with Edward, and he takes her to dinner. Edward eats nothing while Bella asks him questions that he doesn’t want to answer. Like, how did he know where she was? Edward finally confirms that he was following her to protect her. He admits that he can read minds, apart from hers. Bella tells him that she knows he’s a vampire. But she doesn’t care. She doesn’t want to stay away from him.

Edwards takes Bella to his favorite meadow and shows her why he can’t go out in the sunlight in front of people. His solid and cold skin sparkles in the sunshine. This is why they live here, in Forks, where it’s always rainy and cloudy.

Edward admits that her blood is more enticing to him than any other human’s.

Over time he teaches her more about vampires. They have gifts based on how they were when they were humans. Edwards “sister” Alice can see the future, Jasper can manipulate emotions, Dr. Cullen can easily withstand human blood, and Emmett is extra strong, etc. They drink the blood of animals rather than humans, though it never fully satisfies and is a constant struggle. This is why their eyes are golden and not red.

Bella watches the Cullens play baseball during a storm, and another group of vampires arrives. These vampires drink human blood, and they quickly notice Bella. The Cullens protect Bella, and the others leave.

Through his mind-reading, Edward learns that James (one of the other vampires) is a tracker. It’s a game to him, and now he wants nothing more than to track down Bella and kill her. Edward wants to run away with her, but Bella is afraid James will go to her house where her father, Charlie, is.

Bella goes home and makes Charlie believe that she is fed up with Forks, and she is going back to live with her mother. Bella leaves with Alice and Jasper. Edward is staying to try to head James off. They plan to meet up later.

Alice gets a vision of a ballet studio, but they don’t know what it means. Bella receives a phone call from James, and he says that he has Bella’s mother. She is to meet him alone at her old ballet studio. Bella sneaks away and does.

How did Twilight end?

James does not actually have Bella’s mom. It was a trick. James breaks Bella’s legs and bites her hand before Edward and his family arrive and kill him.

Bella faints, but she wakes up when her hand starts burning. The other Cullens leave because of all the tempting human blood, but Doctor Cullen and Edward stay to help her. Edward must suck the venom from her hand before she turns into a vampire. But he is afraid he won’t be able to stop, and he will kill her. He succeeds.

Bella ends up the hospital, and they make up a story about Bella falling down two flights of stairs and out a window. Her parents arrive, and Bella assures them she wants to stay in Forks.

In the epilogue, Edward and Bella go to prom. Jacob Black shows up to deliver a message from his tribe. He warns her to stay away from Edward, but she says she doesn’t care.

Bella asks Edward why he didn’t just let her turn into a vampire. He doesn’t want that for her, but he says he will love her forever.

There you go! That’s what happened in Twilight. We hope you enjoyed this Twilight summary with spoilers.

Ready to read or reread Twilight or Twilight from Edward’s perspective, Midnight Sun? Click to buy and help us pay for hosting! (affiliate link)

One thought on “What happened Twilight? (The Twilight Saga #1)”