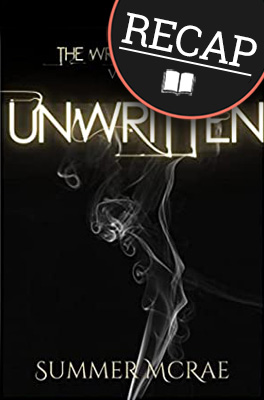 Read a full summary of Unwritten, book #1 in Summer McRae’s The Written World series. This page is full of spoilers, so beware. If you are wondering what happened in Unwritten, then you are in the right place!

Special thanks to Summer McRae, a new BSR contributor, who wrote this great recap! If you’ll notice, she’s also the author of the book! 🙂 Visit her website to learn more about Unwritten and about Summer and to read her book blog. See the end of the recap for links to her Instagram and Twitter accounts.

What happened in Unwritten?

Unwritten is the first novel in a two-book series called The Written World.

The Prologue introduces the main character, Falon Snow, as she is waking up in a hospital room after an explosion, only to find she has completely lost her memories. The first chapter picks up several years later as she is getting ready to travel with her mother to a small town from their past in hopes of regaining some of what she has forgotten.

Upon arrival, she is met by Dane, a mysterious, handsome neighbor who seems overeager to help her get settled. After a few days of his attentiveness, Falon begins to question whether they might have a past connection, though Dane isn’t offering any information.

Falon begins to have dreams that seem like memories of a past life, only they take place in a strange world she can’t quite believe exists. Once she meets Dane, he becomes a part of those dreams, making her even more suspicious of him.

As Falon explores the house where they are to stay for the summer–her grandmother’s house–she finds a mysterious phantom living in the attic. This ghostly phantom seems to have no identity, and like Falon, has no memories of who he is or why he is there. Falon enlists the phantom’s help as she continues to try to unmask clues about her past and to help her search for her missing grandmother, who disappeared during the same explosion that caused Falon’s memory loss.

They discover a very old, very strange book that seems to tell Falon’s story, or at least what she remembers of it, as it depicts strange images of the recent years of her life. But most of the pages, like her mind, are empty–as if they have been erased or unwritten.

As they continue to search for clues in the house, Falon discovers a box filled with metal plates, each one inscribed with a different word. When she reads one of the inscriptions out loud, she feels a surge of magic fill the air around her and realizes she has just released something into her world. She hopes and expects something else to happen as a result, something that could help her unravel the mysteries of her life, but when nothing else manifests, she ends up reading another one of the plates out loud.

While on an outing with Dane, Falon runs into a very strange and alarming character who threatens her if she doesn’t use her ability to send him back. She manages to escape from him but has no idea what he is talking about, though she suspects it has to do with the world in her dreams. As she tries to get to Dane and tell him about what happened with the strange man, she bumps into a group of boys her age, and they invite her to a party.

As Falon begins to remember bits and pieces, Dane becomes more of an enigma, while the phantom begins to transform, becoming a more human, very charming character. When Falon finally remembers the phantom’s name–Scriver–she has a dream that their relationship was much more than what she had imagined, and that they were, in fact, betrothed to each other.

The rivalry between Dane and Scriver heats up once Scriver is fully restored to the very handsome lost love from Falon’s dreams. As Falon’s visions begin to reveal a blossoming attraction between her and Dane, Scriver begins to feel betrayed.

Feeling guilty, Falon tries to make amends by asking Scriver out on a date. While they are out together, Scriver makes a point of flirting with every girl he sees in order to make Falon jealous. Falon gets fed up and ditches Scriver, eventually ending up on a bench eating ice cream by herself.

Falon spots a strange man close by watching her, and he begins to talk to her and say things that don’t make any sense. He then pleads with her to send him back, just like the man she had encountered before, and again she doesn’t know what he’s talking about. As she’s trying to get away from him, Scriver catches up to her and escorts her back to the car.

Once she’s back home, Falon thinks over the idea of going to a party with normal teens and having a little fun for a change, and she decides to text the boys who invited her. Her mother doesn’t like the idea and insists Scriver go along as a chaperone.

They arrive at the party, and Falon soon begins to realize she doesn’t belong there. She ends up waiting to meet one of the boys in a secluded area by herself when she is approached by another strange character very much like the first man she ran into. He addresses her as Red, and as his characteristics are very wolf-like, she begins to realize he thinks she is Red Riding Hood. He tries to abduct her, but Dane suddenly appears and instructs Scriver to get Falon to safety as he locks into battle with the wolf-like character.

How did Unwritten end?

Scriver drives through the dark back roads towards safety, but they begin to notice flashes of human forms that seem to be trying to catch up to them. When one lands on the hood, Scriver swerves to throw him off, then accelerates to a very high speed in order to get away.

They can see a line of wolf-like humans forming a barricade in the road ahead, but Scriver maintains his speed. They collide with the barricade, and the car is thrown off the road, leaving Scriver unconscious and Falon stuck to face the wolf-like creatures herself. As they begin to approach the car, she can feel herself starting to black out, so she pleads with one of them for help.

Falon later wakes up in a dark room with the tall wolf-like humans standing around her. They threaten and beg her to send them back, and one of them hands her a giant book. He tells her she is the Narrator, and she has the ability to read aloud from the books and cause the stories to take shape. The characters who have abducted her have all been displaced and are in need of her ability to set their stories right. She realizes she has no other option, and after a short briefing about what to expect, she opens the book Little Red Riding Hood and begins to read aloud from it.

The Epilogue concludes the story with Falon finding herself dressed as Red Riding Hood while walking down a path through the forest towards the grandmother’s house. The continuation of the story can be found in the soon to be released second novel in The Written World series: Rewritten.

There you go! That’s what happened in Unwritten. We hope you enjoyed this Unwritten summary with spoilers.

Ready to read or reread Unwritten or other books in this series? Click to buy and help us pay for hosting! (paid links)