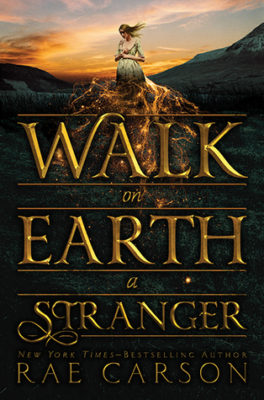 Ratings
4.2 stars on Amazon
3.94 stars on Goodreads
Add Walk on Earth a Stranger at Goodreads

What happened in Walk on Earth a Stranger?

In the year 1849, Leah Westfall lives in a washed up gold mining town in George with her mom and dad. Due to her father’s illness, Leah has tended the homestead for quite some time. She also does the hunting to keep food on the table. Her best friend is a half Cherokee boy named Jefferson. Leah has a secret that supposedly no one other than her and her parents know: she can sense gold.

One day Leah hears gunshots on the way home from school and arrives to find both of her parents dead. They have been shot and their rather large hidden store of gold dust missing. Before her mother dies she tells Leah to run. Leah recalls all of the times that her mom alluded to the fact that she left something terrible in Boston when she left home many years before. She has a secret past that she never even shared with Leah.

I give it 4 stars overall.
Lets be friends on Goodreads:

Jefferson, trying to avoid his abusive father, announces that he is heading west and would Leah like to join him as his wife or maybe his sister. She declines believing it to be her duty to continue the homestead.

Leah’s Uncle Hiram shows up a few days later. He is covered in gold dust so Leah knows that he is the one that killed her parents, though she has no way to prove it. He practices law and a few years ago had drawn up a will giving the homestead to Leah should her parents die. He, however, tricked them because now the homestead (and apparently, Leah) belong to him. He knows about her gold sense and says he has big plans for her. They will go west to California soon. She plays nice for a few days but finally decides to head out on her own to meet up with Jefferson, who promised to wait a while in Independence, Missouri before moving on in case she changed her mind.

She sells some horses, packs a bag, dresses like a boy and takes off. She knows her uncle will come after her because of what she can do. She is robbed of most of her money and her daddy’s rifle but she joins up with a family traveling on a flat boat for a while. She will be their hired hand.

As she travels she even sees a friend from home who tells her some surprising things about her parent’s past. When her mom left Boston she had intended to marry Leah’s uncle but abruptly decided to marry Leah’s father instead. In the lottery, Leah’s parent received a homestead and her uncle did not. Her uncle moved to the city to practice law.

Leah remembers that she was able to find gold at a very young age. It almost makes her lose her mind and forget her surroundings when she senses it.

She finally arrives in Independence and Jefferson is there. They join up with a wagon train that is made up of a ragtag group of misfits including the same family she had been with before. Jefferson is smitten with a beautiful girl named Therese who is traveling with her family. Jefferson has to watch his tongue and try very hard not to give away the secret that Leah is not actually a boy.

The wagon train travels across the United States heading west and suffers many of the trials that any 1849 Wagon train might have suffered during the gold rush. Rivers, mud, a buffalo stampede, children wandering off, harsh terrain, low water, and more. Many of their company are lost along the way, including the man who hired her. He leaves his pregnant wife, Becky, and two children.

Eventually, after Leah is hurt, her company discovers that she is a girl. She now has to fight to keep her status as a skilled hunter and hand.

How does Walk on Earth a Stranger end?

Becky, now Leah and Jefferson’s employer, has her baby as they enter the desert just before they reach California. It will be the hardest part of their journey. While they are delayed, much of the wagon train leaves them behind. One of those wagons, the one that carries Therese and her family, breaks down. Therese turns around and walks back to try to get help from Leah’s group. She does find them and tells them about her family that is stranded in the desert, but sadly she soon dies. Leah is able of find the family using her gold sense.

They all finally make it out of the desert and to the Truckee River. Leah tells Jefferson about her gold sense. He says he already suspected. Jefferson admits to her that he likes her.

They arrive at Sutter’s Fort and almost immediately run into Uncle Hiram. He demands that she come with him but her new family, the one she made on the trail, stands up for her. Her uncle relents for now but promises that they will see each other again soon.

Ready to read Like a River Glorious or Into the Bright Unknown?  Click to buy and help us pay for hosting!