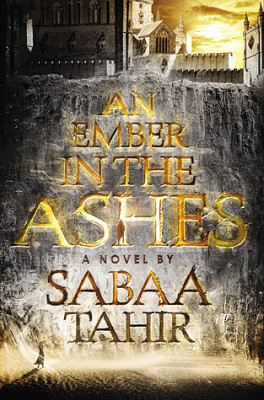 I really enjoyed this book!  Fans of YA high fantasy will love it too.  Read on for what happened in An Ember in the Ashes.  Don’t forget this page has serious spoilers beginning in the summary sections below.

Ratings
4.4 stars on Amazon
4.28 stars on Goodreads
Add An Ember in the Ashes at Goodreads

Point of View
The book is written from the point of view of Laia and Elias in alternating chapters.

Setting
For a reminder on the setting go here…

Main Characters
Laia a member of the oppressed Scholar race.
Elias a student at Martial Academy and member of the Martial race.
More about these and other main characters…

Let’s be friends on Goodreads:

The Short Version
Laia, of the Scholar race, must become a slave at the Martial Academy so that she can spy for the Resistance in an effort to bargain for help to break her brother out of prison. Elias, who is sympathetic to the harsh conditions in his country, is a student and a Mask at the same Academy. He is chosen as one of four aspirants to compete to replace the current Emperor. Eventually sparks begin to fly between these two characters. Elias completes his Trials but in the end is forced to choose Laia’s life over winning the Empire. He is sentenced to death for his failures. Laia is used as a pawn in a bigger underground war. But in the end she gains courage and helps Elias escape his execution. They agree that together they will attempt to release Laia’s brother and likely meet other foes again including the new emperor Marcus.

Details – What happened in An Ember in the Ashes?

The book begins as Laia learns that her brother is working for the Resistance. Raiders come to arrest her brother and in the chaos kill her grandparents who she has been living with since her parents were killed many years ago. Laia flees and later feels cowardly for not trying to help her brother. She decides she must find the Resistance so that they can help her save her brother. When she finds them they agree to help her, but only after they learn that she is the secret daughter of legendary former Resistance leaders.

Meanwhile, Elias is preparing to flee from military school, an offense punishable by death if he is caught. He has been training since he was very young to be a Mask, powerful and strong military leaders that generally terrorize the Scholar race. They are called the Mask for the silver masks that they always wear. Elias is sympathetic to those outside the Martial race in part due to the fact that he was raised by Tribal foster parents because his mother abandoned him shortly after he was born. His birth mother happens to be the leader, or Commandant of the Military School.

Elias has several friends the best of which is another Mask, a girl named Helene who he also seems to have some feelings towards. His plans to desert are ruined when he is chosen for the Trials that will select the next Emperor. He is chosen by the Augurs who are immortal beings that built the school and also happen to be able to read minds. Helene is also chosen along with two of Elias’s school enemies. Elias is the favorite to win because his birth mother is the Commandant and because Elias’s grandfather is a very powerful man.

At the Resistant’s request, Laia agrees to be sent to the military school as a housemaid / slave for Elias’s mother, the Commandant. She will be a spy for the Resistance and in exchange, the Resistance will eventually help her brother escape if she cooperates. Her life at the military school is very frightening and full of pain. The Commandant enjoys harshly punishing even small offenses like being late. Laia performs her household duties while also becoming friends with the cook and kitchen maid. She meets up with her Resistance handler on her trips to town for the commandant but she is having a hard time finding useful information to feed the Resistance leader. She and her handler have a mutual attraction for each other. Laia also meets an extremely talented Martial blacksmith named Spiro that also wishes to see change in the empire. This is who her brother was working with.

Laia and Elias finally meet when Laia is delivering a message to him.  Elias helps Laia get out of trouble a few times and hates his mother for hurting Laia (including carving a K on her chest as a sort of brand).  Elias even helps Laia sneak back in the school after she and the kitchen maid, Izzi enjoyed a night away. But they are caught by the commandant and Elias pretends that he forced Laia to spend the night with him…explaining her absence.  While out, Elias also met a powerful Tribal woman who gave him a coin representing a favor owed.

Elias faces four Trials during the Emperor selection.  During the first one he sees a sort of vision of all the people that he will eventually kill and that spurs his motivation to not be that person.  The second trial introduces old creatures once thought to be myth, like Jinn, efrits, ghuls, and wraiths.  But they are crossing into the human realm.  Laia even sees ghuls occasionally. Also, during the second Trial Helena’s run-in with a supernatural creature leaves her able to sing healing into others, as she is able to do that for Elias after that Trial. Elias works with Helena in these first two Trials but then she finds out that Elias is helping Laia, a mere slave, and sees that he is becoming attracted to her.  Helena has feelings for Elias and they have a fight due to her jealousy though Helena does heal Laia’s injuries at one point.  The third Trial places Helena and Elias and their friends against each other in a battle to the death.  They are forced to kill long-time classmates or be killed.  Elias eventually stabs Helena in a killing blow but later finds out that she was wearing a protective armor that the Augurs gave her.  Elias becomes frustrated with the Augurs and what their motivations are.  After winning this Trial, Elias is given Laia as a “prize” and they are locked in his room.  Of course, he is a gentleman and they get to know each other but he mentions that he dug a secret exit from school under his room and Laia sees this a good information to give the Resistance and get her brother out of prison.

Laia also overhears the Commandant talking to someone called the Nightbringer. Later we learn the legend surrounding him. He is looking for revenge on the Scholars by aligning with the Martials for a time. Nightbringer is a Jenn and the only one left after the ancient Scholars imprisoned the others.

Everything falls apart when the Commandant acknowledges that she knows Laia is a Resistance spy and she knows that Elias cares for her.  She wants to get rid of Elias and so the final Trial is set up with Laia in chains. The three remaining Aspirants (Elias, Helena, and the ruthless Marcus) must kill Laia and the first to do so is Emperor.  When they are to begin Helena knocks Marcus out hoping that Elias will finish Laia off and she will be his second in command only to turn and find Elias attempting to protect Laia.  But while the two of them are arguing Marcus wakes up and throws a knife at Laia striking her and one of the Augurs down.  Marcus is named Emperor and Elias is sentenced to death.  He will be beheaded the following morning. While this is happening, the current Emperor, who wasn’t impressed with being replaced is killed in rout to the academy.

Laia, however, is not dead.  The Augur was hit with the knife, not Laia, and she carries the pretending Laia to safety.  This makes the Augurs intentions even more confusing.  They take her to the Resistance where Laia finds that they never had any intention of helping her find her brother.  Her brother is actually in a faraway prison called Kauf.  The Resistance also played right into the Commandants plans because it was her wish that the current emperor die. The Resistance was responsible and the Commandant, through Laia, was the one to feed them the information they needed to do it.

How did An Ember in the Ashes end?

Laia decides to help Elias escape with the help of the Cook who happens to know a lot about making bombs. Laia is able to help her friend Izzi escape on a ship and then during the commotion of Cook’s diversion, Laia and Elias make their way out of the school. Helena is forced to swear allegiance to Marcus but is able to help Laia and Elias in their escape. She tells them that the next time they see each other they will be enemies. It ends with Laia and Elias leaving with the intention to go free Laia’s brother from Kauf prison.

Ready to buy A Torch Against The Night or Reaper at the Gates? Click to buy and help us pay for hosting!

15 thoughts on “What happened in An Ember in the Ashes?”

Raise your hand if you would love to have this hom