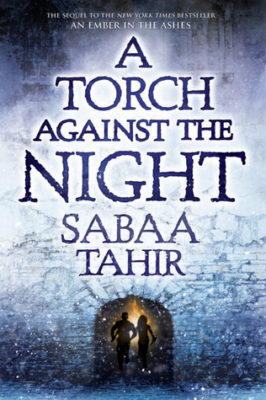 Ratings
4.6 stars on Amazon
4.34 stars on Goodreads
Add A Torch Against the Night at Goodreads

What happened in A Torch Against the Night?

A Torch Against the Night picks up where An Ember in the Ashes left off. Elias and Laia are running for their lives through the catacombs trying to escape The Commandant and her people.

While there, they encounter a girl, a creature who wants silver. She accuses Elias of being the reaper of death, and she wonders what Laia is.  She says that “he” wants the silver and he will get it.

They carve their way out eventually only to run into Elias’s mom, the Commandant. He fights with her, but they knock her out before things get too bad.  Laia feels it was a mistake to leave her alive.  Later they realize that she essentially let them go.

Helene is tortured for information about their escape. Emperor Marcus makes a deal with her father, and they let her go.

Elias and Laia are attacked by wraiths in the desert outside the city.  They escape but soon realize that Elias was poisoned by his mother’s blade. Laia must lead them to safety on horseback.

Elias is in and out of consciousness and dreams of a place where death is waiting for him.

Helene is tasked with finding, torturing, and killing Elias by Marcus. She overhears the Commandant talking with a man named Keris. He claims that he is the Reaper and he tells Helene that her healing power will destroy her if she is not careful. Helene hears the Commandant accuse Keris of having an interest in Laia.

Elias and Laia travel to a place called the Roost to try to obtain an antidote to the poison. Elias continues to have seizures so Laia must go in alone. She gets the cure but not before a fight with tribesmen. She makes her first kill.

Elias learns that he has only a few months to live and then the Soul Catcher will take him.

Helene is given three men to aid in her search. Two are friends but one, Harper, is a spy for the Commandant. She searches fruitlessly but finally gets a tip from Cook.

Keenan and Izzi track Elias and Laia. There is tension, but Laia convinces them all to travel together to Kauf to get Darin out.

Helene figures out that they are going to travel to Nur where Elias’s relatives live.  She gathers a legion to follow.

Elias continues to struggle with the poison, and despite a sandstorm, they finally reach Nur. Wanted posters for Elias and Laia are everywhere.  They find a woman named Afya, a tribe leader, who Elias calls in a favor from. He asks her to take them to the prison and help them rescue Laia’s brother. Reluctantly, she agrees.

Helene and her crew have followed Elias and shut the city down. The city is unusually packed with many different tribes of people. Elias’s adoptive family creates a diversion. Helene is almost killed, but Elias saves her. She lets him go but later questions her judgment. Her family is in danger if she doesn’t do her job. Her sister is to marry Marcus.

After making their escape, the group heads to Kauf. Elias knows he doesn’t have long to live. He believes he will be faster on his own, so he sets off to rescue Darin.

As he travels, he finds himself in Shaeva’s realm. She is the Soul Bringer and is serving a lonely punishment for trapping the Jinn. She was once one herself. He is there for a few days, and she is very vague about why she brought him there. Eventually, she takes him to Kauf prison.

Helene is brought back before Marcus with a new task. She is to publicly execute a few high ranking families that are opposing Marcus’s rule.  She does what is asked of her and Marcus succeeds in gaining loyalty after the display.

A group of refugee scholars happens across Laia’s camp, and they say that the Commandant is ridding the land of scholars. They are even killing prisoners in their cells. A group of Masks comes up on them, and they try to hide in the wagons, but they are found out. Izzi is killed, and Laia confirms that she can become invisible. Afya is angry after a disagreement and Laia tells her to leave. Keenan and Laia continue on their own.

Elias breaks into Kauf but, unfortunately, learns that Darin is dead. He is found by the warden and interrogated for information about Laia. He befriends a scholar child named, Tas, who works at the prison.

Helene visits the Augurs. They tell her that if she survives, she will be great. They don’t come out and say it, but she believes that she still has to kill Elias.  It will be her unmaking. She is visited by Cook again who tells her why Elias and Laia are going to Kauf. Helene heals Cook.

Laia and Keenan find shelter in a farmhouse. They spend the night together.

The Commandant continues purging scholars. She is heading to Kauf.

Elias learns that Darin is not, in fact, dead. He is in a cell near to Elias’s own.

Helene makes it to Kauf but fails to strike a deal with the warden for Elias.

How does A Torch Against the Night end?

Keenan has gained Laia’s full trust. She wants him to feel like family and so gives him her silver armlet.  Keenan melts away, and only the Nightbringer is left.  Keenan has been her enemy and has wanted the armlet all along, though he had to find a way to get her to give it to him freely. The armlet is made of pure silver starlight and is one of thousands of pieces that he has been collecting over countless years.  With them, he can free his kin who are the same Jinn that are trapped in the Waiting forest that Elias visits often.

Helene finds Laia and aides her with directions. Helene decides to leave Elias to his fate to go warn Marcus of a coup that the Commandant is planning. She is going to declare herself impress. Harper says he is no longer a spy for the Commandant. He was tasked to kill Helene but he will not.

The warden has only ever asked Darin about Laia.

Helene figures out that both he and the Commandant are in league with the Nightbringer.

Afya shows up and says she will keep her promise to Elias and help get Darin out. Using Tas as messenger and Laia’s invisibility, they make a plan of escape that involves setting fire to the prison. Unfortunately, Elias dies before it happens. He makes a deal with the Waiting Place that if he can go back and finish what he started, he will return and take Shaeva’s place, bound to the forest. When he returns, they all escape on boats and then hide in that same forest.

When Helene returns to warn Marcus he is livid that she still does not have Elias even though she is presenting a warning about the Commandant. The Commandant uses lies against her. Marcus kills Helene’s mom, dad, and sister. Her youngest sister is then married to Marcus. Her father charged her with protecting the empire before his death.

Later Cook continues to visit and offers aid in taking down the Commandant. Helene is tasked by Marcus to quietly get rid of the Commandant. Harper reveals that he is Elias’s brother. Marcus is observed talking to himself (or to someone), and he seems unable to hurt Helene because of it.

Laia and Elias get all of the escaped scholars to the free lands. Laia stays in a cabin near the edge of the forest to be near Elias who is bound to it. Darin finally wakes up after being knocked out during the escape.

Want to buy A Torch Against the Night or the other books in the series?  Click to purchase and help us pay for hosting!