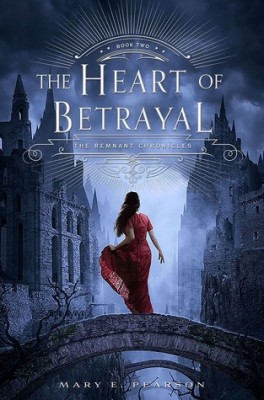 I really like this series!  Book two was almost as good as book one.  The love triangle between Lia, Kaden, and Rafe continues.  If you are asking yourself how did the Heart of Betrayal end then you have found the right place!  Read on for the full recap.

Ratings
4.7 stars on Amazon
4.39 stars on Goodreads
Add Heart of Betrayal at Goodreads

What happened in The Heart of Betrayal?

This book picks up where Kiss of Deception left off.  Rafe, Kaden, and Lia are all headed into Venda: Rafe and Lia as prisoners and Kaden as the assassin who didn’t quite complete his job.  Upon arriving Lia meets the Vendan leader known as the Komizar.  She and Rafe are temporarily locked in a holding cell together and they decide on a story to tell but Lia is not so sure that she trusts him and his ability to spin lies, even to her. He plays his part as Emissary to the Prince of Delbreck very well, though he is actually the Delbreck Prince. Kaden is trying to protect Lia from the Komizar to make sure that she stays alive. Venda usually does not take any prisoners.

Meanwhile Pauline is traveling with her friend Gwyneth and they arrive back in Civica where Lia is from and try to get an audience with the chancellor and ultimately the king to get help rescuing Lia.

Back in Venda the Komizar has to leave town for a few days and Lia is forced into deciding to stay in a room with Kaden.  Kaden is left in charge. Kaden takes Lia to buy some new clothes. They go to a dressmaker who makes Lia many more garments than they pay for.  Lia gets to know Kaden better and he also helps her with Vendan culture.

Lia meets a woman named Calantha who always gives thanks at the meals. She eventually hands the saying of the blessing over to Lia which is strange because it is in the Vendan language and Lia shouldn’t know it. But the words pour forth from her.  Calantha is the last Komizar’s daughter. She got the current one to kill him after he had beaten her near death and killed her lover.

Lia also sees who she believes to be Lady Venda, even though she is long dead. Her gift speaks to her some but Lia isn’t sure if that’s what it is or what it means. She discovers a hidden passageway that exits from Kaden’s room and finds an underground cavern where robed scholars are working with ancient books. She is also able to meet up with Rafe. They fight but eventually come to terms. Lia still loves him as much as ever.

When the Komizar returns it is discovered that some of the clothes given to Lia from the clans signify that she has been accepted by them. The Komizar eventually starts using this to parade her around and help him gain favor with the people by giving them hope. What the Komizar doesn’t realize is that the people see Jezalia, her tattoo and her new clothes as something else entirely. Something from the histories that have been forgotten by people like the Komizar.

Lia makes a young friend named Aster who helps her sneak around the catacombs. They steal a book from the monk-like scholars. She also continues translating the book she took from the Royal Scholar back in Civica. It is starting to seem that Lia’s mother had her own plans.

Lia is leaning more and more about the impoverished citizens of Venda. She is also becoming known for her stories and her remembrances that she recites daily from her window.

Kaden is sent out to find a missing governor that should have already arrived. While he is gone Aster keeps her company and the Komizar takes her to all the nearby by villages. Eventually, after meeting secretly with some of the clan leaders, he tells Lia that she is to marry him. Lia didn’t see it coming and is very angry. But the Komizar threatens Rafe. He tells her to convince them all.

Kaden finally returns. He is so mad when he hears the news that he goes straight to the Komizar’s office and picks a fight with him. The Komizar reminds him that Venda comes first and that Lia can continue staying with him for a while.

While Kaden was gone we learned that he also has the gift (as his mom did) and he knew of Lia even before they met. He believes that they are suppose to be together in Venda. We also learned that his dad was a Morrighan noble. He was born to a mistress and when his mom died his dad sold him to beggars.

Vendan soldiers often bring back prizes from their conquests that the Komizar distributes to the governors. The day after the engagement announcement one such bundle of prizes is brought in and they are clearly from Delbreck soldiers. Rafe is livid. His outrage leads to a duel with Kaden. Rafe is the better swordsman but he eventually lets Kaden win.

We soon learn that the new governor is one of Rafe’s men. They are making plans to escape over the great river on a raft.

On one outing with the Komizar, Lia is taken to a new area. As they crest a hill she sees another city. A city filled with soldiers meant to invade Morrighan. She pleads for Morrighan to no avail. These soldiers also have what they call Death Steeds, huge wild horses that can be sent into battle carrying exploding powder.  When Lia asks how they created the right mixture for the explosives, the Komizar implies that the scholars have been discovering secrets from the ancients.  Lia then confronts the robed scholars and finds that many of them are from Morrighan. Some were even her and her brother’s tutors.

Meanwhile news of Walther’s death reaches Civica where Pauline and her companions are. Unfortunately the stories also include that Lia’s plan all along was to marry the ruler of the barbarians and become queen of Venda. Most Vendans believe the lie easily including Lia’s brothers. Pauline and her companions can’t believe it. Lia is named number one enemy of Morrighan and should be killed on sight.  Pauline then finds out that Mikael, her former lover is alive. Lia had lied to her. She is only two months away from delivering his baby.

Rafe’s men are hidden in Venda and tell Lia of their plan of escape the next day just before her wedding is to take place.

Kaden declares his love for Lia. He tells her that he has “seen” the two of them together here in Venda. Kaden was holding a baby. Lia realizes he really does have the gift and she too has had visions. Visions of Rafe leaving without her. But Lia still loves Rafe.

How did the Heart of Betrayal end?

The morning of the wedding the Komizar comes and thwarts her plans to escape by locking her in her tiny room. Lia gets Aster to find a key and let her out. When she gets to the terrace to go find Rafe the gift tells her to tell the people the story of Venda. She recites the story including a girl named Jezilia who will save the people. Lady Venda tells her the rest of the story including how she would be a sacrifice. The Komizar catches her and kills Aster for helping.  But then Lia plunges her dagger into the Komizar’s chest. Kaden, Rafe, and Rafe’s men come to help as soldiers try to take Lia out.

Everyone except Kaden manages to run away to the hidden raft. Calantha helps them. As they begin floating away Lia is shot twice with arrows and falls in the water. Rafe jumps in and they are swept away. They wash ashore miles down the river and are on the side of home but are freezing and injured. Rafe picks Lia up and begins walking.

Ready to read or re-read Kiss of Deception, The Heart of Betrayal or book #3, The Beauty of Darkness?  Click to buy and help us pay for hosting!

10 thoughts on “How did the Heart of Betrayal end? (The Remnant Chronicles #2)”