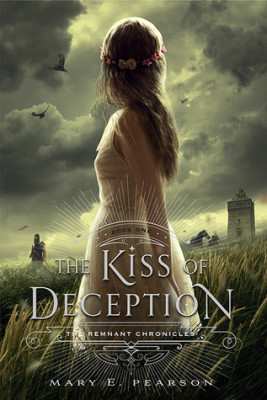 This book was written in a very interesting way! There is a runaway bride princess who is being tracked and then befriended by both a prince (who she was suppose to marry, but had never met before) and an assassin (sent to kill her). The princess doesn’t know the true identities of either. Here’s the tricky part: As the story goes on and they both give fake names, you, as the reader, don’t know which guy is the assassin and which is the prince. You’re not sure which one she is falling for. You make guesses and assumptions in your mind but you don’t find out until near the end. Very cool!

Ratings
4.4 stars on Amazon
4.07 stars on Goodreads
Add Kiss of Deception at Goodreads

Main Characters and Other info
Lia – First Daughter (and princess) of Morrighan
Pauline – Lia’s lady in waiting and friend
The Prince – Prince of Dalbreck and Lia’s fiance that she has never met
The Assassin – Assassin sent from Venda to kill Lia
Walther – Lia’s brother
Setting – Morrighan, Lia’s home country and Venda, where the assassin is from.

What happened in The Kiss of Deception?

Lia, a 17 year old princess also formally known as Princess Arabella Celestine Idris Jezelia, is preparing for her wedding.  Her mother and others are there as artisans are etching a wedding kavah (a sort of temporary tattoo) onto her back.  As this happens she thinks about how her “gift” has not manifested, and how her mother insisted on including the name Jezelia when she was born though it was not a family or royal name, and most of all, how she does not want to marry an old man from the kingdom of Dalbreck.

When she is completely ready and the opportunity arises, both Lia and her maid Pauline flee the castle just before the wedding.  They spend a few days traveling and eventually settle down with Pauline’s aunt Berdi, who gives them work at her Inn located in Terravin.  Lia thinks she is going to love this new found freedom and nobody-status.  However, she is starting to realize that part of her wedding kavah is not fading as it should, but rather it stands out more than ever on the back of her shoulder.

Did you know that there is great artwork out there for the Remnant Chronicles? We created a Pinterest page to store some of it. You should go check it out and follow us!

Meanwhile, the prince of Dalbreck, who turns out to be handsome and young, not old as Lia had feared, begins tracking Lia.  He is embarrassed but also finds her a curiosity and begrudgingly admires her for being brave enough to do what he was not.

The two men arrive in Terravin around the same time and end up sitting together at a table at Berdi’s Inn.  They both meet Lia and give unrecognizable names, Rafe and Kaden.  Both know who Lia really is, though neither of them knows that the other one recognizes her.  Weeks go by as Lia falls into her new role and both the prince and the assassin find her intriguing and unexpected.  Both are starting to fall for her but the reader doesn’t know who is who.  Is Rafe the assassin or is Kaden the assassin?  Lia seems to be falling for Rafe but which one is he?

Pauline has a sweetheart, Mikael, who is in the army.  She believes that he will eventually come find her.  She soon finds that she is pregnant with his baby.

Lia’s brother Walther finds her and arranges a secret meeting.  He is not angry with her for fleeing but comes only to make sure she is OK.  Walther is married to Gretta and they are expecting their first child.  Walther also warns her that the Scholar and the Chancellor are very angry.  Lia, out of pure spite, stole some documents and an ancient book from the Scholar’s private office.  Lia can’t read the strange language.  Walther also tells her that Pauline’s sweetheart is a no good, two-timer.  Lia doesn’t want to hurt Pauline and decides to tell her that Mikael is dead.

Some drama ensues since both Rafe and Kaden see her secretly meet with her brother.  Both assume she is having an affair until she sets the record straight.

The village of Terravin is preparing for the summer festival of remembrance.  Lia travels alone into town and while out, is confronted by an assassin sent by someone at the castle.  Luckily, Rafe and Kaden come to the rescue and kill the assassin.  Later after the celebrations, Lia and Rafe sneak away for a long-time coming makeout session.

Not long after that Lia’s brother Walther returns with the news that a band of rebels killed his wife Gretta.  He is delirious with sorrow and rage and leaves her to go take his revenge.  Lia is devastated by the loss and also realizes that it is because of her that Morrighan’s valuable alliance was not completed through marriage.  If not for that, her sister-in-law would not have been attacked by the rebels.

Lia decides to go back home and try to patch up the mess she has made.  But while she and Pauline are traveling they are stopped by a band of Vendans and Kaden is one of them.  Kaden is the assassin.  But since Kaden has a soft spot for Lia he convinces his companions that Lia in fact does have the gift, (a magical power bestowed to 1st daughters of the kingdom of Morrighan) and she should be spared and taken back to Venda.  They allow Pauline to go back to Terravin.

Lia starts a long treacherous journey to Venda.  Luckily she is able to convince the other Vendans that she has the gift and some of them hold her in awe.

Pauline finds Rafe, who we now know is the Prince of Dalbreck, back at the Inn and tells him what happened.  He heads off in search of her.  His companions also catch up with him to help him track the bandits.  Pauline and a friend start the journey back to the heart of Morrighan to try to get Lia’s parent’s help in getting her back.

Lia is livid with Kaden for all that has happened though he keeps trying to be nice to her.  The group stops at a vagabond camp to rest for a while.  The leader, Dihara, teaches Lia that she really does have the gift and how to “listen” for it.  Together they start to translate the ancient text that Lia stole from the Scholar.  It is here that Kaden professes his love for Lia while he is in a drunken state. Lia also finds out that it was Kaden’s companions that killed her brother’s wife Gretta.

After they travel on, Lia is able to escape for a day and finishes translating the book while on her own.  It is a story about the beginning of Morrighan and the prophecy that someone named Jezelia will come to save her people.

How does The Kiss of Deception end?

Just before she is recaptured by Kaden and his men, she witnesses a large army of Vendans take down her brother Walther and his small group of soldiers.  It is a massacre and Lia insists on burying the soldiers before they continue on to Venda.  Once the now very large group arrives at the great bridge that separates Venda from the other countries Kaden prepares to present Lia to the Komizar (leader of Venda) as a princess and possessor of “the gift” (which he does not realize she actually has). At that same time Rafe finally catches up to them and convinces Kaden to take him with them as an emissary of the prince with a message to the Komizar.  Lia finally realizes that Rafe is the prince of Dalbrek, though Kaden still doesn’t know. Together they cross the bridge into Venda.

Ready to read The Heart of Betrayal or Kiss of Deception?  Click to buy and help us pay for hosting!