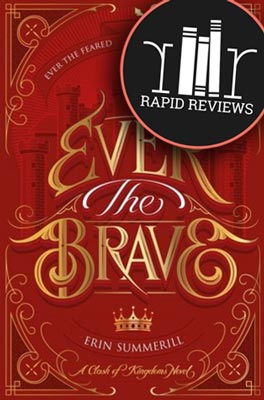 No spoilers in this review of Ever the Brave by Erin Summerill! (There will, however, be minor spoilers for Ever the Hunted, the first book in this series.) I liked it! I give it 3.5 stars. It was a fitting conclusion to the Clash of Kingdoms series, although I enjoyed the first book a little more. My favorite part is this series feels like true YA, fit for even young teen readers.

In this installment, Britta and Cohen struggle to help Malam recover from the mistakes made in their former ruler’s regime, especially the oppression of those who wield Channeler magic. Britta’s magical bond—which tied her to Cohen after healing him years ago—was severed at the end of Ever the Hunted. She’s now bonded to King Aodren after healing him from the wound necessary to break a long-standing Spiriter bond.

Britta and Cohen spend much of the book apart as Cohen performs his bounty hunter duties. He is in Shaerdan searching for Phelia, the Spiriter who had a hold on Aodren in book 1. Cohen soon runs into Lirra, the Archtraitor’s daughter, once again. He ends up helping her investigate the recent kidnappings of many Channeler girls, all the while continuing to search for Phelia.

Back in Malam, Britta learns new information about Phelia after saving a man this woman attacked. With the help of King Aodren, Britta begins a journey of her own, trying to learn more about her magical abilities as well as her past.

Ever the Brave asks two main questions. Is there any way for Aodren to unite his divided kingdom? And will Britta and Cohen ever find a way to have a relationship, especially with the obstacles that keep getting in their way?

My biggest gripe is I got frustrated by Britta’s decision-making process at the end of the book. It didn’t feel in keeping with her character development in this duology and seemed to just be a device to create tension. And I felt like Ever the Brave often lacked the grit needed to make me feel truly tied to the conflicts and truly worried about the future of Malam and its people.

Additionally, quite a few of the relationship scenes felt like typical YA tropes. We keep reading YA books for a reason, though, right? We love many of these tropes! 😉 The other positives? Summerill’s prose is easy to read. The kingdoms she built are quite vivid in my mind. And I like the characters she created. Britta and Cohen are my favorites, but I enjoyed getting to know Aodren better as he also had POV chapters in this second installment.

I guess more than anything, what I’m trying to say is this book seemed to be on the young side of YA. So while it was good instead of great for me, it’s exactly what I think is missing from many current YA authors and their new releases. Bad language was kept to a minimum, and the adult situations were limited to fairly innocent interactions. So I absolutely recommend this series to young YA readers. I am so excited to see an author putting out new material that is fit for the younger end of the YA audience!

P.S. THIS IS A MINOR SPOILER FOR EVER THE BRAVE, SO READ AT YOUR OWN RISK!!!! Summerill recently tweeted about her next release, a standalone about King Aodren and Lirra called Once a King. I read this tweet before starting Ever the Brave and was surprised that I didn’t see much build-up for her next book toward the end of this one. Yet I’m excited to see what direction it will go, especially since Summerill said it’s probably her favorite book yet. 🙂

Let us know what you think about Ever the Brave in the comments! No spoilers on this page please. 🙂

Ready to read Ever the Brave? Click to buy and help us pay for hosting.