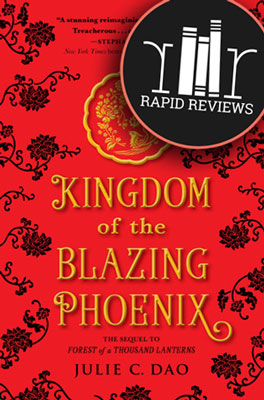 No spoilers in this review of Kingdom of the Blazing Phoenix by Julie C. Dao. I liked it pretty well and give it 3 stars. This sequel was different from what I expected. I thought it would focus on Xifeng, the main character in Forest of a Thousand Lanterns. She certainly wasn’t my favorite character as she wasn’t a very sympathetic one, but I expected this sequel to be a continuation of her story. It wasn’t. Kingdom was about Jade, the emperor’s daughter (and Xifeng’s stepdaughter).

A nurse has raised Princess Jade in a monastery since her mother’s death at the end of Forest. She has led a simple, subservient life but returns to the palace when Xifeng calls her home to celebrate her sixteenth birthday. Jade is overwhelmed by the royal opulence and shocked to see the sickly, weakened state her father is in. She soon realizes Xifeng is the true ruler of their kingdom and has ulterior motives for inviting her back to the palace.

Jade escapes Xifeng’s grip with the help of two new friends and sets off on an adventure to learn the truth behind her family’s past. Even though she doesn’t want to lead, she sees the state of the kingdom and decides to gather power to try to assume her rightful place on the throne.

This book started with promise, had a good premise, and wrapped up in an exciting way. So why was I bored for such a long stretch in the middle? The story contained many elements I usually love, but it just didn’t quite add up to a great read. It was good at best.

The tone of this installment was vastly different than that of Forest because Jade is the polar opposite of Xifeng, and this threw me for a loop. My other complaint: Dao didn’t properly foreshadow biggest surprise of the book, thus it didn’t feel fully earned. I was confused by another surprise in the climax and was ready to lodge a big complaint. But Dao redeemed herself with how the story eventually played out.

What did I enjoy? Dao’s prose is once again great, and I love reading about Asian culture. These are easily the two biggest positives in this finale. Overall, I would recommend this series. It is above average YA for sure. But I didn’t like Kingdom as well as Forest. The funny thing is, I kind of missed all of the things I complained about in my review of book 1. 😉

Let us know what you think about Kingdom of the Blazing Phoenix in the comments! No spoilers on this page, please!

Ready to read Kingdom of the Blazing Phoenix? Click to buy and help us pay for hosting.