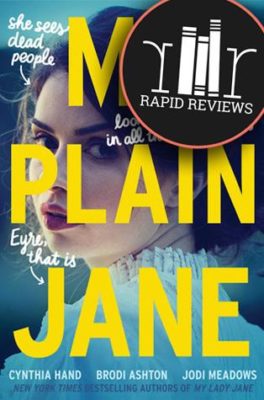 No spoilers in this rapid review of My Plain Jane by Brodi Ashton, Cynthia Hand, and Jodi Meadows. I liked it and give it 3 stars. I have to admit, my expectations for the second installment of The Lady Janies were high. My Lady Jane was such a fun surprise and so different than anything I’d read before. It was a lighthearted and tongue-in-cheek take on the short reign of King Edward VI as well as Lady Jane Grey. So I couldn’t wait to see what the authors would do with Charlotte Bronte’s story. While Plain Jane contained many of the same elements as Lady Jane, it didn’t add up to the same level of entertainment.

I mentioned Charlotte Bronte above, which may leave you wondering why Jane is in the title of this sequel. It’s because My Plain Jane is also about Bronte’s literary creation, Jane Eyre. It’s about ghosts and ghost hunters, too. Lady Jane added fantastical elements to the historical account by way of citizens who could transform into animals. They were a small part of the tale, but fantasy takes center stage in Plain Jane. Many of the protagonists are ghost hunters or at the very least can communicate with ghosts.

Alexander, a high-ranking local ghost hunter, has recruited Charlotte’s brother Branwell, but he isn’t living up to the hype. It’s not for lack of trying, but he’s just not a very good hunter and is a bit of a bumbling sort. When they discover Jane Eyre, Charlotte’s teacher and friend from boarding school, is a seer with additional powers, Alexander sets out to recruit her.

Jane wants to move on from her teaching position yet has no interest in being a ghost hunter, especially after witnessing hunters capture a rogue spirit. Jane decides to accept a position as a governess for a Mr. Rochester instead. Sound familiar? 😉 Plain Jane then shows us how Charlotte might have first come up with the idea for her iconic novel, Jane Eyre. But as we experienced with the royal story in Lady Jane, the tale is quite different than the one with which we’re acquainted.

While I didn’t laugh out loud time and time again like I did in Lady Jane, I often smiled at the antics of the characters in Plain Jane. There is once again an over-the-top feel to both the storyline and the narrative. You can’t take these Jane tales too seriously; they’re not meant that way! They’re a break from the serious to enjoy an alternate take on stories we know and love.

All in all, I recommend My Plain Jane if you’re in the mood for a cheeky, silly read. The authors have crafted a unique and clever series, although they’re linked by style rather than by overlapping storylines. Each book can serve as a standalone narratively speaking. So if you haven’t read My Lady Jane yet, I’d recommend starting with it as it’s easily the better of the two. Next up is My Calamity Jane, due out in 2020.

Let us know what you think about My Plain Jane in the comments! No spoilers on this page please. 🙂

Ready to read My Plain Jane? Click to buy and help us pay for hosting.

#Lightbringer is out a week from today!!! This is easily one of my most anticipated reads of 2020. Need a refresher on the first two books in the series before buying the new release? We have recaps! #Furyborn #Kingsbane https://www.bookseriesrecaps.com/what-happened-in-kingsbane/