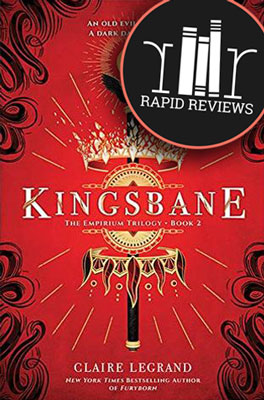 No spoilers in this rapid review of Kingsbane by Claire Legrand. I liked most of the book and LOVED the ending, so I decided on 4.5 stars. I put this book down and picked it back up several times before I finished it. The crazy thing is, I was never bored. That wasn’t the problem, yet Legrand had to work hard to earn each star from me. If I had to sum Kingsbane up in one word, I would propose “overwhelming.” More about that in a bit.

Kingsbane continues the saga of Rielle and Eliana, a mother and daughter separated shortly Eliana’s after birth. They’re believed to be the prophesied queens: The Blood Queen and The Sun Queen. One of them is predicted to be full of darkness evil, and the other will be full of light and goodness. Both are able to work powerful magic, and it seems apparent at first which queen is which as their stories unfold in alternating chapters.

Furyborn, book 1, showed us the moment the pair was separated, in which Rielle sent Eliana with Simon, a trusted young boy possessing the gift of time travel. But Simon and Eliana were separated as magic hurtled them 1,000 years into the future. After many years of searching, Simon eventually found Eliana. In Kingsbane, he begins to teach her how to harness and properly wield her magic as he’s struggling to regain his time travel powers.

When we skip back in time to Rielle’s chapters in book 2, we see madness settling into her mind. She’s fighting to repair the damaged gate that once kept the angels at bay. And she’s torn between two men: Corien, the angel who speaks in her mind and promises he’s the only one who will accept the true her, and Audric, the boy she’s loved all her life who will be the next king. Audric continues to defend Rielle fiercely, despite her outbursts of power and temper and their repercussions.

Simon hopes he can eventually send a fully trained Eliana back in time to prevent the future in which they’re living. Basically, the two of them hope to change the course of history by using Simon’s time travel threads to send a powerful Eliana back to prove to Rielle that things have to change.

What’s not to love? Legrand gives us political woes and foes, angels, magic manifesting in a variety of ways, time travel, family issues, and love triangles. Oh yes, and then there are those twists at the end: two to be exact, one in each timeframe. Both broke my heart, and one of the two is absolutely crazy. The rug was pulled out from under me as I read it. (What other clichés can I use to reiterate how surprised I was?) I had to be told a couple of times in two different chapters before I accepted it.

When I glanced back through certain scenes leading up to the shock, there were some definite signs I mistook for something else. Yes, I fell for what Legrand was selling hook, line, and sinker. (Oh yay, another cliché!) 😉 And that, my friends, is how to orchestrate a fully earned, truly shocking turn of events.

My stomach plummeted during the final chapter featuring the characters affected. I honestly felt nauseous. Is there still hope this storyline can be redeemed? I’m almost positive there is. And I’m not just saying this because my favorite character is involved. During my search for justification, I found some rather compelling signs. We’ll see if I’m reading them properly and if my fav character can be redeemed in book 3. A girl can hope! 😉 (NOTE: Please don’t read my Furyborn review if you don’t want to be spoiled because I reveal my favorite character in that post.)

How did I ever manage to put this book down multiple times before finishing it? It’s a book I’m recapping, and in a book this complex, I have to stop and take notes about what I’ve read at the end of every chapter. And that’s not always fun! But I do it because it’s what our readers want. It’s not easy to stop in the middle of the action to record what I just read; it’s truly a labor of love.

Recapping isn’t the only reason for my slow progress, though. Between the two different points of view so far apart in time, the story unfolds quite slowly, gradually weaving the plot on each side. Just when we reach an important point, we skip backward or forward to the other half of the tale. I guess what I’m saying is reading this series requires a little bit of work. It takes dedication, but I assure you it’s worth it!

I recommend this series to high fantasy lovers who don’t mind a complicated story, with one caveat: Even though this is marketed as young adult, this is NOT a book intended for young audiences. It should be shelved in the adult section instead. But let me rave one more time about the fact that Legrand pulled off my favorite plot twist in recent memory. The last handful chapters of this book were jaw-dropping in the best way possible. I cycled through confusion, fury, shock, and heartbreak. And that’s what we want as readers, right? We want to FEEL. Well done, Legrand. Well done.

Let us know what you think about Kingsbane in the comments! No spoilers on this page, please!

Ready to read Kingsbane? Click to buy and help us pay for hosting. (affiliate link)