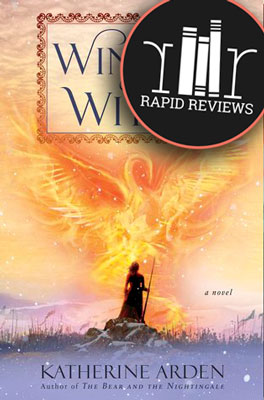 No spoilers in this review of Winter of the Witch by Katherine Arden. I thought it was fantastic and give it 4.5 stars! This is one of those rare series in which I love each book more than the one before. In this installment, Arden has crafted a dramatic, heart-wrenching conclusion told in her usual lovely prose.

Vasya is once again facing foes of the physical world and the “other world” where Morozko and his brother exist. Since she is one of the few who can see the inhabitants of both worlds, Vasya is called to dwell in each at different times. She continually carries the weight of the world on her shoulders, and she never complains or bows under the pressure. That’s all I’m going to say plot-wise so I don’t spoil even one tiny thing about this finale.

I don’t think I’m remiss in saying that this conclusion is epic in scale. The story was cohesive; it was rounded out and felt whole. Arden answered every question I had, yet not everything was tied up with a metaphorical bow. And that’s okay. That’s not how epic fantasy works.

To me, the greatest stories are those that come together so seamlessly that they feel like have been out there in the universe just waiting to be told. This is what Winter felt like. I know Arden included bits of Russian history in this series, which she notes after the book concludes, but she weaves in magic and fictional characters to create a tale that is meaningful and timeless.

This series contains magic and royalty and beautiful landscapes, but that’s not what it’s about. It’s about family, about making hard choices, and about becoming an independent adult. It is great fantasy, no doubt, but more than that, it’s simply a great book about humanity at its best and its worst.

Another thing I love about this series is the main character isn’t perfect. Far from it, in fact. Vasya’s not beautiful, and she’s often not even that nice. But she’s noble and selfless, and many people love her for it. The familial love, friendly love, and even romantic love she experiences does not stem from anything superficial. She’s loved because of her fierceness and her sacrifices, among other things.

Before I conclude, I have to give a quick nod to a few of my favorite elements of magic in Winter.

In a nutshell, Arden is a master storyteller. I recommend this series to everyone searching for a powerful story about a passionate heroine that’s beautifully told. I’m sad it’s over but am glad to know the conclusion to Vasya’s story. I can’t help but wonder what’s up next for Arden. She’s now an auto-read author for me, so I can’t wait to get my hands on her next book!

Ready to read Winter of the Wtich? Click to buy and help us pay for hosting.

Let us know what you think about Winter of the Witch in the comments! No spoilers on this page please!

2 thoughts on “Rapid Review of The Winter of the Witch”