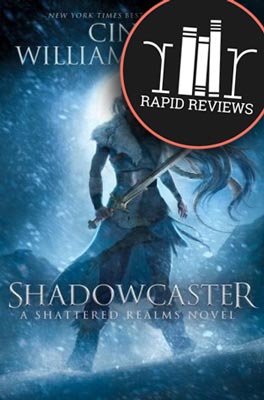 No spoilers in this review of Shadowcaster by Cinda Williams Chima. This is a hard one to rate because it started off slow for me, but then I enjoyed the second half. Ultimately, I decided on 4 stars. This rating is partially influenced by my love for this world Chima has created as well as what I anticipate in the rest of the series based on what she presented here.

This installment focuses on Lyss, Ash’s sister and heir to the Grey Wolf throne. Their mother Raisa still reigns, and Lyss has taken up life as a Fellsian soldier. She is skilled and brave, has moved up through the ranks quickly, and is now a captain. The other main character is Hal, a captain in the Ardenine army. As always in the Seven Realms, the Fellsian army is battling the Ardenine one. Lyss and Hal meet up a couple times in battle and discover they have quite a bit in common despite being on opposing sides. Another important player who emerges in this book is Breon, a mage-marked boy who can play music that quite literally charms the listener.

This book 2 is more like a book 1 because Chima introduces so many new characters. In fact, we only get short glimpses of some of the characters from Flamecaster. And others we don’t see at all! Since this is a four book series with a broad scope, I understand why Chima is taking her time introducing the characters and unraveling the story. But I sure missed seeing a couple of my favorite characters!

It is interesting being in the head of skilled warriors like Lyss and Hal: to understand what they think, what they feel, and how they’re sometimes conflicted as they strategize and lead. Lyss thinks the strategies long employed by her people need reconsideration, and she devises a different approach. It’s great to see so much female expertise and leadership at work here as well as in other areas in the Fells.

The military and political maneuvering in the Seven Realms is interesting, but the magic in this world is what intrigues me the most. The different ways it manifests and the different skills some of the mages possess are really cool. Plus, it is just plain fun being in Breon’s head. Despite making plenty of bad choices in his short life, the innocence and wit he possesses is refreshing and reminds me of Jenna. I suspect these two (really, all the mages) are going to play just as an important role in the upcoming books and battles as the rulers and soldiers do.

I recommend this book to high fantasy fans, especially those who have enjoyed Chima’s previous books! I’m immediately ready to read book 3, Stormcaster. Based on one particular line in Shadowcaster, I think I already know to whom this title is referring. I’m so excited to read a book about this character! I sincerely hope all storylines converge and all the characters we met in books 1 and 2 show up in Stormcaster.

Let us know what you think about Shadowcaster in the comments! No spoilers on this page please!

Ready to read Shadowcaster? Click to buy and help us pay for hosting.