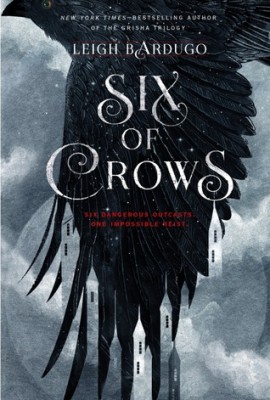 No spoilers in this review of Six of Crows by Leigh Bardugo!

This book is so complex, so fluid, and so enchanting! Do you ever feel like a story is a legend that has been out in the universe just waiting to be told? That is exactly what I told a friend when I was halfway through this book. The world building created wonderful mental pictures in my mind of both Ketterdam and Fjerda and gave me a taste of a variety of stunning cultures in Bardugo’s world.

The six title characters are tasked with rescuing a notorious prisoner from an impenetrable prison at the center of the warrior nation of Fjerda. If they succeed, the team is promised enough money to change their lives forever. The story is told in alternating viewpoints from five of the six main characters…Kaz Brekker, Inej Ghafa, Nina Zenik, Matthias Helvar, Jesper Fahey, and Wylan Van Eck. You watch Kaz assemble the team for their various skill sets and then watch their shaky alliance develop. You see their personal agendas intertwine with Kaz’s main objective.

STACY’S BOOK RATING
I give it 4.75 stars overall.
Lets be friends on Goodreads:

I guarantee there’s a character you will feel an immediate bond with. When you turn the page at the end of the chapter, you will hold your breath and hope theirs is up next. For me, it was Kaz! I love a brilliant character, one who is always a step ahead of everyone else, and he certainly is that. But I also liked when his vulnerabilities and wry humor showed. And the other main characters were intriguing and well-developed, too.

There are many surprises and discoveries along the way as each character’s backstory unfolds against the backdrop of the attempted rescue. Several romances attempt to blossom, too. Do Kaz’s brilliant plans and tricks run out before the job is done? You’ll have to read the book to find out! 😉 Despite the set-up for what sure to be a stressful book two with another big job and even more at stake, the closing scene left a HUGE smile on my face!

This book is an absolute must-read for everyone, especially those of you who have read Bardugo’s past works! Even if you haven’t, this is a great place to start! It’s where I started, and now I’m excited to read her trilogy, The Grisha. And mark your calendars…Crooked Kingdom, the sequel to Six of Crows, is set to be released on September 27, 2016. I can’t wait!!!!

P.S. The audiobook for Six of Crows is GREAT! There is a different narrator for each character, and each reader captures the character’s personality and voice so well!

Let us know what you think about Six of Crows in the comments! No spoilers on this page please. 🙂