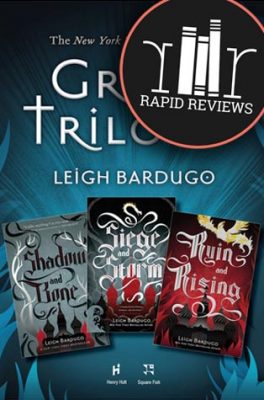 Thank you to Mary, a guest blogger, for writing this review! 🙂

No spoilers in this review of The Grisha Trilogy by Leigh Bardugo!

Have you read Six of Crows yet? If not, it’s the very next thing you should read. It’s so good! When you’ve finished, and you’re not quite ready to leave the Grisha world, you need to read Leigh Bardugo’s first series, The Grisha Trilogy. I couldn’t put these books down.

The series follows the story of an orphaned girl and boy who grow up in an orphanage in Keramzin, a city in Ravka. They both become soldiers in the First Army. As their regiment begins to cross the Shadow Fold, they are attacked by a swarm of long-clawed, leather-winged, blood-thirsty volcra. Alina’s gift reveals itself while she tries to protect Mal, and the stage is set for a powerful, enchanting trilogy. Can her gift be used to destroy the Shadow Fold, or is The Darkling trying to seduce her to spread darkness and evil?

I don’t want to spoil the books completely, so I’ll have to stop where plot is concerned. Leigh Bardugo is a master as far as character development is concerned. She makes her characters both flawed and heroic. She offers redemption even to the darkest of evils. She makes you understand both perspectives of the Ravkan Civil War.

My favorite secondary characters were Baghra and Nikolai. Baghra gives wisdom and knowledge while Nikolai offers cunning and strategy. Nikolai is the Kaz Brekker of the series. (You don’t know who Kaz is? Seriously, you haven’t read Six of Crows, yet? Do it now!)

I loved this series so much! I give it 4.5 stars overall. I’ll definitely read it again while I’m waiting for Crooked Kingdom to come out this fall. Bardugo might be my new favorite YA author, after J.K. of course.

On a side note, the woman who reads the books on Audible, Lauren Fortgang, does a fantastic job. She is the same person who reads Inej’s voice in the Six of Crows production as well.

Let us know what you think about The Grisha Trilogy in the comments! No spoilers on this page please. 🙂

Add Shadow and Bone, book 1 in this series, on Goodreads:

Searching for a gift for that book lover in your life? Or maybe you’re looking for some bookish gifts to add to your own Christmas wish list. Check out this fun post! #christmaslist #booklovers #bookishgifts https://www.bookseriesrecaps.com/gifts-for-book-lovers/?doing_wp_cron=1606234293.0905160903930664062500