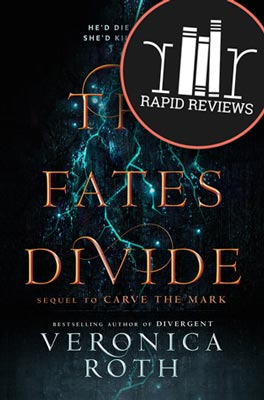 No spoilers in this review of The Fates Divide by Veronica Roth. I give it 3 stars. Unlike many readers, I enjoyed Carve the Mark, the first book in this series. Even though the subject matter was much different than Roth’s Divergent series, I saw similarities as far as how both series progressed. They started off with a bang—a promising story with some mysteries about which I was dying to know the answers—but in the end, Roth couldn’t quite deliver.

This sequel got off to an agonizingly slow start. I wasn’t interested in what was happening until nearly the halfway point in the book, yet surprisingly, I’m glad I stuck with it. Eventually, a plot development intrigued me enough that it was worth the wait. More about that below.

I always include a little plot summary at this point in my review, but it’s hard to sum this one up. It’s basically a battle for who will rule their universe. Will it be Isae? Will it be Cyra, who has taken the throne for her fallen brother? Or will it be Cyra’s evil father Lazmet, back from the dead? And how do the Oracles fit into the mix? At times, it seems they are merely using their visions to orchestrate the future they desire.

Turmoil exists at every turn, and tragic mistakes are made. In the midst of it all, Cyra feels like Akos’s fate dictates his feelings for her. Their fates (as proclaimed by the oracles) seem to dictate too much of their path in life, and they’re both so stubbornly independent that they go on with life with their heads held high even as their hearts are breaking.

This may sound like a decent storyline, but I was slowly plodding along until Roth dealt me a surprise. It was the perfect kind of twist: one that made sense in retrospect as the clues were there yet one I would’ve never figured out on my own. This catapulted me through the second half of the book, and the final showdown was fairly compelling and emotional.

I will give any book that shocks me a bump in rating. In this case, I was wavering between 2 stars and 3, and that surprise pushed my rating to a 3. What else did I enjoy? This might sound silly, but I loved the names of the characters and the places. I give Roth an A+ in this area. They were original and cohesive. And I liked the two lead characters a lot. They’re both strong—as tough as nails, even—and I respect that.

What else didn’t I like? Cisi’s chapters. When a new point of view is added in a book series, sometimes I like it (Wylan in Crooked Kingdom, for instance) and sometimes I don’t (Cisi in Fates). I understand why we needed to hear from her, but I was bored in her chapters and ready to skip back to Akos or Cyra as soon as they began.

I only recommend this book to those who enjoyed Carve the Mark. If you didn’t like the first book in this series, you probably won’t be willing to stick it out until the second half of Fates, when it finally gets good. But I’m glad I pushed through if only to discover the plot twist and to learn the ultimate fates of Akos and Cyra.

Let us know what you think about The Fates Divide in the comments! No spoilers on this page please.

Ready to read The Fates Divide? Click to buy and help us pay for hosting.