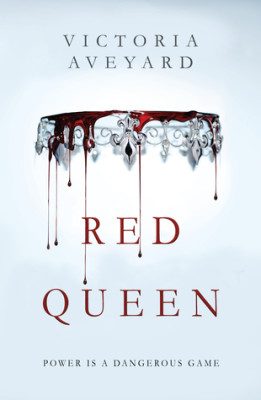 You’ll like this series starter by Victoria Aveyard.  If you are looking for a full recap of Red Queen read below.  *Spoilers!

Maven – Cal’s younger brother
Arven – The Queen
Julian – brother to the previous queen and Mare’s tutor
Setting & Society – The fictional kingdom of Norta where people are divided by blood, those with red blood and those with Silver
***** Everything below is a SPOILER *****

What happened in Red Queen?

Mare is trying to find an apprenticeship by her 18th birthday so that we will not be conscripted into the army to the the Lakelands. Her best friend Kilorn is already apprenticed. Unfortunately, Kilorn’s master dies, and since he’s already eighteen, he will soon be conscripted. Mare suggests that they both leave the Stilts and run away. She seeks the help of Will Whistle, who has connections to the black market. He introduces her to Farley, who agrees to transport them on behalf of the Scarlet Guard for 1000 crowns.

Mare goes to Summerton with Gisa, her sister, to steal the money. While there, news comes of a of terrorist attacks in the capital and a Red rebel society called the Scarlet Guard claims responsibility. Local Silvers turn against the Reds and Gisa is captured. The bones in her hand are shattered, but the guards eventually let Mare and Gisa leave Summerton.

Did you know that there is a ton of artwork out there for the Red Queen? We created a Pinterest page to store some of it. You should go check it out and follow us!

Mare goes to town and is caught by a Silver picking pockets. His name is Cal. He later lets her go and gives her a crown. The next day, Mare is given a job as a server at the palace in Summerton. She is to serve the royals and nobles during Queenstrial, a contest to choose a wife for the crown prince, who is actually Cal who she met the day before.

During the contest, Mare looses her footing and falls towards the pit of the arena, which is covered by a lightning shield. To everyone’s surprise, Mare not only survives the shield, but is completely unharmed. She feels energized by the electricity running through her body and accidentally blasts through the shield. When she reaches the ground she is frightened and escapes through a hatch. But Cal catches up to her.

Queen Elara interrogates Mare and she realizes that she will need to cover up the fact that a Red has powers. The queen gives Mare a fake background, and tells her that she will now be engaged to her second son, Prince Maven. To keep Mare quiet the queen agrees to Mare’s demands: that her brothers be brought back from the war, that her family will be taken care of, and that Kilorn not be conscripted.

Mare begins training. She has lessons with Julian Jacos, the previous queen’s brother, who teaches her how to manage her power. Together, they discover that Mare can produce electrical energy. This has never been heard of before. Silvers cannot create anything, but can only manipulate things that already exit.

Cal helps Mare sneak out of the palace to visit home. She discovers that her brother Shade tried to desert the army, and was executed. On the way back, she meets Kilorn and joins the Scarlet Guard. Later, Maven joins the Guard too. He passes the names of four Silvers to Farley as potentials to be assassinated.

Later, during a ball at the Palace, the Scarlet Guard carries out the assassinations. Cal captures Kilorn and Farley as they try to escape. Cal interrogates the prisoners, and when they don’t give up their secrets, they use torture. Ptolemus Samos, Evangeline’s brother and one of the targets, survives and kills Tristan, one of the prisoners. That same night, Mare and Maven help the prisoners escape, with Julian’s help.

The next day, the royal household is traveling to Archeon, the capital. When Mare goes to say goodbye to Julian, she discovers that his classroom has been destroyed. He is also going to leave and head for Delphie to work with the archivists. He gives her a gift in parting.

During the investigation concerning the prisoners’ escape, Red blood is found in the cells. Mare fears that they will discover her part in the escape once they match her blood in the blood bank. The King releases a video in which Mare declares that the treatment the Reds receive from the Silvers is fair and just, and she is made to disown the Scarlet Guard. Rewards are offered to the Reds for any information regarding the Guard or any of its members.

Julian’s gift to Mare contains a list of Red soldiers whose bodies were misplaced, and among them is her brother Shade. Julian also wrote to her that these soldiers and Mare share a certain mutation that makes them different from both Reds and Silvers. He suggests that Mare find them.

Maven helps wipe Mare’s information from the blood bank and they meet up with the Scarlet Guard at the capital. Farley takes them south, towards the wastelands and the Guard reveals that one island is still alive, the City of Ruins, Naercey. They are planning to overthrow the Reds.

When their plan is executed, Mare tries to convince Cal to do what is right and fight for equality, but he won’t. He captures Mare and Maven who are then taken to the King and Queen. Elana has her own plan and takes control of Cal and the King’s minds. Mare realizes that Elana has been working things to her advantage all along. And Maven was part of it.

How does Red Queen end?

Elana uses Cal to kill the King with his own sword and he and Mare are arrested and Maven is crowned King. Mare and Cal are to fight the house’s best fighters to the death. Arven neutralizes Mare’s power, but she manages to trick another fighter and Arven is killed. Mare and Cal are able to defeat all of the fighters, but Maven sends in soldiers to shoot them down. Mare uses her power to control a lightning storm to buy some time. Guards come to their rescue, shooting the soldiers and pulling Mare and Cal to safety.

After some time they wake up surrounded by the Scarlet Guard on an Undertrain and Mare’s brother Shade is there and very much alive. He has the ability to teleport which is why he has not been caught. Cal is in chains. Mare and Cal realize that they now have a common enemy in Maven and a score to settle.

Ready to buy the other books in the Red Queen Series?  Click to buy and help us pay for hosting!  And don’t forget the novella Cruel Crown.

There you go! That’s what happened in Red Queen. Hope you enjoyed this recap of Red Queen with spoilers.


**We are looking for recap contributors!**