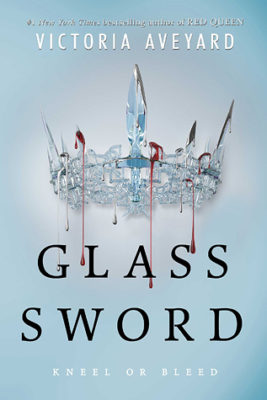 Read a full summary of Glass Sword, book #2 of the Red Queen series now!  This page is full of spoilers so beware. If you are wondering what happened in Glass Sword, you are in the right place!

What happened in Glass Sword?

Glass Sword picks up where Red Queen left off. Mare, Cal, Shade and the rest of the Scarlet Guard are traveling by train to Naercey. It is this ruin of a city that the Scarlet Guard call home. They are being pursued by the new King Maven and his Silver fighters. He even has Red slaves as a human shield that will protect his front line.

Maven lets missiles fly in an air raid. Evangeline and Ptolemus are there on the ground with their family leading Silver fighters. Mare and her friends manage to escape on a submarine and are taken to an island called Tuck.

Soldiers from the north, Lakelanders are stationed on Tuck when they arrive. The Lakeland commander, known as the Colonel, has taken over leadership of the Scarlet Guard. The Colonel is Farley’s father. He immediately puts Cal in chains and takes him to be interrogated. Mare’s parents and brothers are already on the island.

Cal is locked up in an underground bunker. Mare and Kilorn go to talk with him but at the last second Kilorn pushes Mare in the cell with Cal. Later, however, Kilorn, Shade, and Farley come to rescue the two of them. Kilorn is able to grab the list of newbloods from the Colonel’s office. Shade jumps them to freedom, and they steal an airplane to escape the island. They will now try to find each of the newbloods on the list before Maven does.

The first newblood they find is Nix, and he agrees to join them. Next, they travel to Harbor Bay where they know many newbloods are located. Unfortunately, the local Scarlet Guard betrays them, but they are able to escape. Maven is terrorizing the citizens in an attempt to get them to turn Mare over to him. Despite this, they are able to sneak into the records department to find the addresses for the newbloods.

They get the information that they need, but Maven beats them to the first person on their address lists and has set a trap them. Maven uses a mysterious machine on Mare and it causes her great pain, and she passes out for four days. When she wakes up, she learns that her friends were able to save her and get them all out of the city. They have also spent the days getting several of the other newbloods out of Harbor Bay.

They continue to find newbloods across the countryside. The others treat Mare as the Lightning Girl—as an outsider. They see her as different. Mare struggles with not feeling like herself anymore, and she also struggles with wanting to push Cal away and wanting him to stay close.

Did you know that there is a ton of artwork out there for the Red Queen? We created a Pinterest page to store some of it. You should go check it out and follow us!

Cal teaches the recruits how to use weapons, how to fight, and how to control their powers.

Maven begins leaving Mare little notes in their quest to find more newbloods. When Maven reaches a newblood first, Mare arrives to find all of that person’s family dead. In his notes, he tells her that the killing will stop if she turns herself in. Mare doesn’t tell anyone about these mind games. Cal believes Maven is still in love with her and will do anything to get her back. Mare refuses to return, even if it means Maven will back off on the violence. Mare and Cal both miss the Maven they thought they knew.

Mare finds out that Maven is sending 5000 child soldiers to the front lines, but they can’t think of a way to help them right now.

They meet a man named Jon who can read the future. He does not join them, but he tells them that Julian, Mare’s old tutor and friend, and other newbloods are in Carros Prison. Maven’s mother, Queen Elara plans to use them in this war. Mare convinces the group to go and rescue them. Cal plans also to release the Silvers that are being held in the prison as well in hopes that they will join him. They are, after all, being detained because of their defiance of the queen. The idea of rescuing Silvers makes the others uncomfortable.

Jon also points them to a young, headstrong newblood named Cameron. She has escaped from this prison and also has the ability to shut off other people’s powers. She reluctantly agrees to help Mare in her rescue mission.

Together, Mare’s volunteer group of newbloods sneaks into the prison. They are able to escape with many newly freed newbloods and Silvers alike. Queen Elara is there, and Mare kills her after a harsh battle. Shade is killed during their escape. After the rescue mission, Mare and Cal are on bad terms. Cal is appalled at some of Mare’s actions.

Cal wants to head back to where they left the rest of their group, but Mare wants to be dropped off on Tuck first to strike a deal with the Colonel. He accepts her as an ally, and they produce a televised message calling for reds, newbloods, and Silvers to rise together against Maven.

After this, Mare meets twin representatives from The Free Republic of Montfort. Their leader offers Mare and the other newbloods sanctuary. Mare refuses.

How does Glass Sword end?

Mare collects volunteers to aide in a rescue attempt for the child soldiers being sent to the front lines. The Colonel takes another group as well. They will attack on two different fronts. Her brothers join her for this rescue. As they travel by plane to carry out their mission they are attacked, grounded, and overcome by Maven and his men. Mare offers a trade. She will go with him as a willing prisoner if he lets everyone else live. Maven agrees.

The book ends as Mare publicly kneels at Maven’s feet with a golden collar and leash about her neck. Maven promises that she will be put on display just as Mare did to his mother’s body.

Ready to buy King’s Cage?  Click to buy and help us pay for hosting!  And don’t forget the novella Cruel Crown.

There you go! That’s what happened in Glass Sword. Hope you enjoyed this recap of Glass Sword with spoilers.


**We are looking for recap contributors!**

8 thoughts on “What happened in Glass Sword (Red Queen #2)”