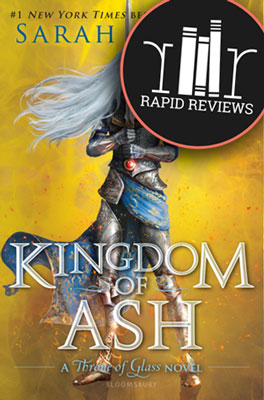 No spoilers in the beginning of this rapid review of Kingdom of Ash by Sarah J. Maas. (I’ll put a few spoilers under the **SPOILERS** mark below.) And let’s just get this out of the way right now: I don’t think I can call this review a rapid one. 😉 This series and this book are too long to keep my review short. I promise I’ll do better with brevity in my next review!

I give this finale 4 stars. You guys, I have mixed feelings about this series. I loved the first two books, the Assassin’s Blade novellas, and Tower of Dawn: the large, detailed world Maas developed and the distinct characters she created. Books 3-5 were very uneven for me for a variety of reasons. In a nutshell, I did not like what Maas did to the relationships she had established or the mature turn the content took. I hated to think about young teens who fell in love with this series reading the language and adult situations in these subsequent books. And the prose became a little over-the-top for my taste in these middle installments.

The only book of the middle three about which I wrote a lengthy review was Empire of Storms, so check here if you’d like to read further details about my feelings. And read more about why I loved Tower of Dawn and began to have hope for the finale here. So how did I feel about Kingdom? It was good. Not great, but definitely good. I’m glad I stuck it out through the books I didn’t enjoy as much to see how Maas wrapped everything up.

Where do I even begin with a synopsis? You know every single surviving character we’ve met in books 1-6 and the novellas? Well, they all make an appearance in Kingdom. Aelin calls in all favors to assemble warriors from her whole world to unite against Erawan and Maeve.

The story moves along slowly—well, maybe more deliberately than slowly—as we check in with a plethora of characters. They are each involved in initial confrontations in a variety of locations. Everyone is fighting their way north to help Aelin rid the world of the two foes who have been plaguing them for far too long. The story obviously culminates in the big showdown for which we’ve all been waiting.

There were so many storylines to check in on that Maas would only share a glimpse of a character or two in each chapter before moving on to the next. But in this nearly 1,000-page-long book, all characters were given adequate page time to address their issues and conclude their stories. I enjoyed Dorian’s and Chaol’s chapters the most; the original characters have always been my favorites by far. Except for Aelin, that is.

Oh, Aelin. I’ve always said I liked her better in the first couple of books as Celaena. She became too invincible, too secretive, and too snarky for me (although I loved Celaena’s level and style of snark). I didn’t like what she hid from those she was supposed to trust the most, namely Rowan and Aedion. I just didn’t see the point of her secrecy. And I thought I could never forgive her for what she did to Chaol.

But Maas changed that last complaint of mine by the end of Tower. And she finally humanized Aelin in Kingdom. Thank you, thank you, thank you, Maas for giving Aelin vulnerabilities and for forcing her to trust and rely on her friends. I finally liked the main character again! Her friends were loyal and true, yet not blindly so. I loved when they voted against her at one point and that teamwork was required as they battled Erawan and Maeve.

All in all, I enjoyed the journey Maas took us on in Kingdom. She did a great job of showing us everyone we’ve met along the way (or at least mentioning them, like Sam and Nox). There were some epic reunions. They were some of the best parts of the whole book. And I’m eternally grateful that we got a couple of scenes with the original three. This series is at its best when Aelin, Dorian, and Chaol are together.

I have to put in a plug for my favorite surprise: what ‘nameless is my price’ meant. Maas mentioned this phrase often, and it ended up being something I should’ve noticed but never did. I LOVE reveals like this! It’s one of the many hints Maas dropped very early on in the series but didn’t reveal its significance until the end. Very cool!

One more thing I enjoyed about the finale: The writing was a little less indulgent this time around. I felt like Maas had gotten too elaborate with her prose, but her style was more restrained in Kingdom. Maybe it was because she had so much material to cover and so much to accomplish. Whatever the cause, I enjoyed the style more than the over-the-top middle installments. There were still words and phrases that made me chuckle, though, like when the word ‘mate’ was used (and it’s quite often, folks) and when any variation of snarling/growling/baring teeth was mentioned.

Even though there was much to enjoy in this book, the ending wasn’t all it could be. Maas did exactly what I was afraid she would. (See more about this below the spoiler mark.) And we didn’t even get updates about two of my favorite characters in the epilogue. Really?! Their stories were satisfactorily wrapped up in the main narrative, yet I would’ve loved to check in with them to see how they were faring several years later.

As always with this series, my caveat: This is not meant for young readers! Maas thankfully dialed down the bad language and sex scenes a bit in Kingdom, but it’s still not meant for young YA readers. I recommend this book to everyone else who has read the Throne of Glass books. If you’ve journeyed with Aelin and gang through the first six books, you’ll want to see the story through to the end. This series is epic, no doubt. The scope is broad. The mythology runs deep. And the characters feel very real.

Let us know what you think about Kingdom of Ash in the comments! No spoilers on this page please (unless they’re clearly marked). 🙂

Ready to read Kingdom of Ash? Click to buy and help us pay for hosting.

I actually addressed more than what I expected to above. The issue I feel compelled to at least briefly acknowledge is my complaint with the conclusion: It was all wrapped up so neatly and tied with a metaphorical bow. Quite frankly, this is exactly what I was afraid would happen. Not a single main character died. And there are A LOT of them. I knew some side characters would perish and felt like I could almost pick out who they would be before I even began reading Kingdom.

Every person Maas placed the most emphasis on throughout the series survived the epic battles against vicious foes. And that’s just not realistic. I’m often a fan of bittersweet endings and felt like this type would be the most fitting for a sweeping fantasy series like Throne of Glass. I get it: Maas loves these characters. As a faithful reader, I do, too. But they can’t all survive. I would’ve felt more (even if the feeling was pain) and the journey would’ve been more validated if a big sacrifice or two had been made to reach the ultimate peace for which we all yearned.

Also, I have to give a shout out to Dorian for becoming a shapeshifter and for felling Morath. Besides the scenes with him, Chaol, and Aelin together, this was my favorite part of the book. He was brave and selfless and resourceful. And I loved every page of it. I honestly wish we’d gotten a little more Dorian in Kingdom.

Finally, we needed a more extensive epilogue. I wanted a bigger time jump. I wanted updates on everyone. But I especially wanted to see how Chaol and Dorian were doing. I wanted a scene with Chaol as a father, and I wanted to see him hug his mother and brother again. I wanted to get a glimpse of the type of ruler Dorian turned out to be. He needed to become the polar opposite of the bad examples he’d seen and to forge his own path, yet I think he would’ve become a great king. And how are he and Manon faring? Did they figure out some kind of relationship that could endure?

I wanted to know all of these things. Maybe Maas will eventually grace us with one last novella to check in with these characters we’ve walked alongside for years. A girl can hope, right? 😉

6 thoughts on “Rapid Review of Kingdom of Ash”

Should I read Shadow and Bone? I watched the first

Book, ebook, or audiobook? Which is your favorite

Have you already purchased #ASkyBeyondtheStorm? Need a refresher on the first three books in the #AnEmberintheAshes series before you start on the finale? We have you covered! #AReaperattheGates #ATorchAgainsttheNight https://www.bookseriesrecaps.com/what-happened-in-a-reaper-at-the-gates/