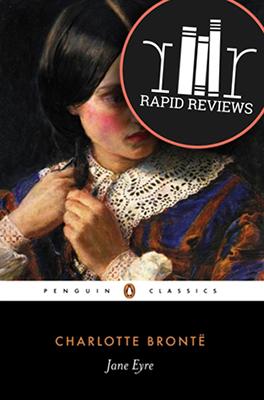 No spoilers in this review of Jane Eyre by Charlotte Brontë.

G.H.Lewes described Jane Eyre as “suspiria de profundis,” meaning sighs from the depths, concealing even more pain than it reveals.

Charlotte Brontë borrowed heavily from her own life to create Jane Eyre in that there was a boarding school, a career in teaching, a clandestine affair, and a short stint as a governess. Her passions clearly fueled the dullness of her existence because she created a fantastically romantic story using these mundane events, save the affair. Brontë’s depiction of affection and bullying in a boarding school is eerily accurate as she also started her life as an orphan packed off to a boarding school. Being a boarding school product myself, albeit with a family, I can relate to the rigour and discipline often employed to raise capable young ladies. The times of our experiences differed. And mercifully, the experience of losing friends to avoidable diseases is now practically non-existent.

Brontë created meaning where she may have struggled to see any, success in a spot inhabited by failure, and romance where it wasn’t requited. She seemed to inhabit and survive in a world which rarely gave her what she wanted. Yet she crafted a world of her liking and channelled it into her books. One has to wonder if that is what helped her survive her 38 years.

Jane Eyre’s time at Thornfield Hall was a romanticised version of Charlotte Brontë’s own time in Brussels, where she developed a strong affection for her employer. The popular story is the affection was unrequited. But one has to wonder why a woman would continue corresponding with a man who refused to reciprocate her affections. Whatever her equation with her employer in Brussels may have been, Jane’s time at Thornfield Hall most probably heavily borrowed from Charlotte’s feelings and emotions. Those cosy evenings when Jane and Mr. Rochester exchanged views by the fire and those times he exalted her position in his society by including her in parties with his friends may have all been reproductions of real interactions.

Jane Eyre is oftentimes spoken of as a romantic tale, but romance is a small part of this story. It is primarily the life story of a woman who goes from belonging nowhere to finding a family. At all times in history, the worst circumstance is that which belongs to an orphaned child. When the story begins on that note, it is natural that one expects a saviour to show up and end all her troubles. The white knight who would restore her missing confidence and self-esteem, two virtues she never had a chance to build as a child. Mercifully, the book progresses as real life does. Jane does not benefit from any white knight and is forced to employ the only saviour available to her: the one within herself.

Jane suffers several blows until at last she makes a life for herself as a teacher. She suffers as long as she expects someone else to fix her problems. Considering the times, it was quite bold for the author to write of a woman who chose a solitary life and a career as a teacher rather than marry, the sensible option. By stark contrast Diana and Mary, her friends-cum-cousins, lament the loss of an inheritance they assume a right over in hopes it would help them secure good husbands.

I am inclined to praise the masterful manner in which Charlotte Brontë has shown the contrast between different women, their choices, and how those choices made them feel. For a brief moment in time, it seemed like that would be how Jane’s story ends. That she would revel in her independence and new-found freedom and live her days forgetting Thornfield Hall and its ghastly residents. However, closure is the entire point of books. At times, the closure is for the author. At other times, the closure is for the people they have used as inspiration for their books. Maybe authors only write to find closure.

It is my belief that symbolism in books is more a function of the reader than the author. I do not know of many authors who profess to include as much allegory as books are claimed to hold. Those that do often speak of it when promoting their books. It’s a new hobby in today’s world to dig into possible and hidden meanings. When an author writes an honest story, we want to read what is trying to find voice within us. Hence we may make assumptions about what the author was trying to imply or the buried story behind the printed version.

A fantastic example of this is when Charlotte Brontë dedicated the book to William Makepeace Thackeray, whom she admired immensely. This shocked those who knew Thackeray as much as it shocked him. You see, Thackeray kept an ailing wife hidden in his attic, just like Mr. Rochester in the story. Mental illness carried few cures and much shame in those times. Brontë was unaware as to this aspect of Thackeray’s life as she was not acquainted with him. But I suppose there’s something to be said about human instinct.

Speaking of instinct, Jane returns to Thornfield upon hearing Mr. Rochester’s voice calling out to her in a dream. Today’s world is increasingly divided about the existence of human instinct and a sixth sense. We want to hear about “proof” and “evidence” more than a strong gut feeling. In that regard, I find the books of yesteryears rather more “complete” than those of today. They contained the human experience in its entirety and bore no apologies about what may be considered unacceptable.

Perhaps it was the comforting cover of Brontë’s nom de plume, Currer Bell, which allowed her to write this embellished autobiography where she reinvented what needed reinventing and adopted what she wished was hers. The assumed name and gender crumbled swiftly under the weight of her popularity and celebrity, however. The façade also came crashing down as her desire to defend her books and characters grew stronger. After much confusion over which of the books belonged to which author—the other Brontë sisters also published under masculine pseudonyms—the truth of the matter was revealed. For that one moment, Charlotte showed just as much strength as her protagonist, Jane.

One sometimes has to wonder whether Charlotte Brontë took inspiration from Jane Eyre or whether Jane was inspired by Charlotte. It appears that Charlotte was determined to prove a plain looking small girl could achieve as much or even more than imposing women. In all walks of Jane’s life, she wrote an antagonist much stronger and imposing than the protagonist. One can only assume it gave Charlotte much pleasure to lead her heroine on this arduous journey, patiently claiming victory over each person.

If you read nothing in the review above and skip to the bottom, here are the few key takeaways. This is an autobiographical novel, albeit not the only one covering Charlotte Brontë’s life. This is not a love story, at least not in the conventional sense. Instead, it is the journey of Jane Eyre, learning to love herself and discovering how everything falls into place when she finds herself.

Let us know what you think about this review of Jane Eyre and Sarina’s great review in the comments! No spoilers on this page, please!

Ready to read Jane Eyre? Click to buy and help us pay for hosting.