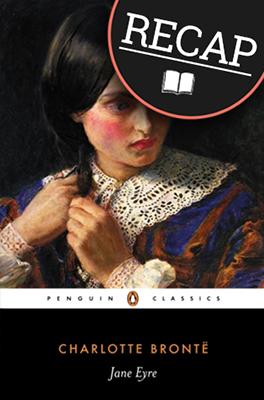 Read a full summary of Jane Eyre by Charlotte Brontë right here! This page is full of spoilers, so beware. If you are wondering what happened in Jane Eyre, then you are in the right place!

What happened in Jane Eyre?

Set somewhere in north England and sometime during the reign of George III, Jane Eyre introduces us to the orphaned protagonist by the same name who lives with her aunt and three cousins. Her uncle has recently passed away, leaving Jane with a house full of people who dislike her. Jane’s aunt, Sarah Reed, is extremely unkind to her. Her cousins Georgina and Eliza ignore her. And her third cousin John torments her. Bessy, the maid, is the only one who is kind to Jane sometimes, but not without reminding Jane of her unfortunate position.

After an altercation with John, Jane is locked up in the room where her uncle passed away. She faints from a panic attack after she imagines seeing his ghost. The doctor who treats her is kind, and upon hearing of Jane’s treatment at the hands of her aunt, he suggests Jane be sent away to school. Her aunt selects Lowood School, a charity institution for young ladies. She makes sure to tell the headmaster, Mr. Brocklehurst, Jane is of a deceptive disposition. He assumes this means Jane is a liar.

Lowood School is poorly run, with cold rooms, scant meals, and inadequate clothing to guard against the harsh weather. Jane finds friendship in Helen Burns, an older student who teaches a valuable lesson: that Jane would be much happier if she did not bear grudges. Mr. Brocklehurst shames Jane in public when he visits the school, but the kind Miss Temple helps to publicly clear Jane of the false charges.

Jane completes her education at the school and accepts an appointment there as a teacher. She eventually tires of the place as her two favourite people are gone. Helen Burns passed away of consumption many years ago, and Miss Temple leaves upon her marriage.

Jane advertises her availability as a governess in the newspaper, and the housekeeper at Thornfield Hall responds to it. Jane accepts the position and moves to Thornfield Hall, where she is in charge of the education and overall development of a young girl called Adèle Varens.

When delivering a letter to the post office one evening, Jane meets Mr. Rochester, the master of Thornfield Hall. He does not often visit Thornfield Hall, but he stays for a while his time. He and Jane and become close. Jane comes to understand that Adèle was left in Mr. Rochester’s care by her mother, but it is not clear whether he is Adèle’s father.

Strange things happen at Thornfield Hall. Jane hears loud laughter, which the housekeeper, Mrs. Alice Fairfax, attributes to an employee named Grace Pool. One night, however, Mr. Rochester’s room is set on fire, and a visitor named Mr. Mason is attacked viciously. These events are also blamed on Grace Pool. Jane begins to wonder why Grace is still allowed to work at Thornfield Hall despite her conduct.

One morning, Mr. Rochester departs abruptly. He returns a few days later with a party of his friends. Amongst them is a young lady called Blanche Ingram who is as beautiful as she is heartless. During the visit, Miss Ingram does her best to show Jane in poor light, but Mr. Rochester is determined to protect Jane and does so at every slight.

Shortly after this visit, Jane receives notice that her Aunt Sarah has taken ill and wishes to see her. Jane immediately leaves for Gateshead Hall, where her aunt apologises to her for being as horrid as she was. She also tells Jane that her uncle, Mr. John Eyre, had been in touch asking after her, but Mrs. Reed had written to him that Jane had died at the Lowood School. She apologises for cheating Jane out of a possible inheritance. After her aunt’s funeral, Jane promptly returns to Thornfield Hall.

Jane assumes that Mr. Rochester is imminently getting married to Miss Ingram. He teases Jane about it, going so far as to ask what she would do after her employment terminates. Jane confesses her feelings to him out of raw emotion, and Mr. Rochester asks her to marry him. They set a date, and Jane writes to her uncle about her impending marriage. She does not hear back until the day of the wedding.

Mr. Mason arrives to stop the marriage and tell Jane that her uncle has asked him to put a stop to it as Mr. Rochester is married to Mr. Mason’s sister. As it happens, Mr. Rochester was tricked into marrying Mr. Mason’s sister for her large inheritance, even as her mental health was fast declining. He was never able to lead a normal life with her. But he was married in the eyes of the church, so he could not remarry. Mr. Rochester asked Jane to live with him in France, where they could live as man and wife, but she refuses as it goes against her principles.

The next morning, she leaves Thornfield Hall without any farewells and tries to get as far away as possible. She mistakenly leaves her bag on the coach she had taken and thus loses all her possessions. As she wanders through a village close to where she was dropped off, Jane begins to grow increasingly hungry and cold.

In a ravenous state of exhaustion, she ends up on the doorstep of Moor House. They are kind enough to take Jane in, and she grows acquainted with the sisters Diana and Mary Rivers and their brother St. John. She gives them her name as Jane Elliot to avoid being found by Mr. Rochester. The Rivers family is hospitable, and Jane convalesces at their house.

Shortly after she recovers, the girls leave for their governess jobs and St. John finds Jane a position as a teacher in the nearby village where he is a clergyman. Over time, Jane grows familiar with St. John, whom she realises is in love with the heiress Rosamund Oliver. Rosamund’s father owns the school at which Jane teaches. St. John asks Jane to marry him instead of Rosamund as he holds ambitions to go to India as a missionary and believes Jane to be more appropriate for the role of a missionary’s wife. She refuses him.

In due course, Jane receives notice that her uncle has passed away and left her a fortune of 20,000 pounds. She also discovers she’s related to the Rivers and is overjoyed. She decides to share her fortune with her cousins and asks Diana and Mary to give up their governess jobs and return home.

One night, Jane dreams of Mr. Rochester calling out to her, and she knows she must go to him. She leaves for Thornfield Hall the next morning. Upon arriving there, she sees the house was burnt down by Mr. Rochester’s wife, who also jumped to her death after setting it alight. Mr. Rochester lost his eyesight and a hand in the process. When he meets Jane again, he asks her if he is hideous and proposes to her again. She accepts him this time, and they live together in a house in the woods called Ferndean Manor. Two years later, some of Mr. Rochester’s eyesight returns, and he is able to see his newborn son.

There you go! That’s what happened in Jane Eyre. We hope you enjoyed this Jane Eyre summary with spoilers.

Ready to read Jane Eyre? Click to buy and help us pay for hosting!