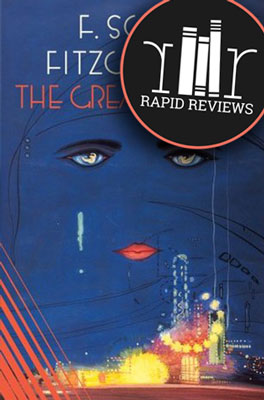 No spoilers in this review of The Great Gatsby by F. Scott Fitzgerald.

Trigger Warning: This book contains 2 racist references; however, it may still be possible to read this book as the mentions are not longer than a word and sentence.

As I sit at my desk on this warm April Fool’s Day trying to review a masterpiece, I recall Daisy Buchanan’s words. “I hope she’s a fool. That’s the best thing a girl can be in this world, a beautiful little fool.” There is a point in every woman’s life when she wishes she was not smart enough to see people for what they truly are. This book, however, is just that: an observation of the systematization of society. There are the ones who live, the ones who feed off others, and the ones who observe the dance of the two. Nick Carraway, the character that narrated the story, belongs to the last category. His story is an observation of the former two.

The story in itself is not the most brilliant ever written, yet it does contain some hard-hitting observations of human nature. It lays bare the quintessential “American dream” overlaid with the ugly foundations upon which it sometimes stands: extravagant parties, large houses in Long Island, holidays in Europe, and long languid afternoons. As would be expected of a writer, Fitzgerald seems to project himself onto a character in the story. I would have expected he would’ve modeled Gatsby after himself. But it appears Tom and Daisy are closer to him and his wife Zelda.

Fitzgerald’s reputation as a womaniser and rumours of their constantly strained relationship are reflected heavily in Tom and Daisy. I wonder if the fact that Zelda had an affair with a naval officer in France inspired the scene with Gatsby, as Fitzgerald knew about it, but she did not leave him. One wonders if the altercation between Gatsby and the couple in a hotel room in New York was inspired by a real-life exchange with the naval officer.

This story could never have been written by someone who had an inflated sense of self. It is only the self-deprecating that can examine oneself strongly enough to stand apart from the ego and isolate peculiarities to write about. Fitzgerald’s construction of Gatsby inspires wonder in his impression of the affluent lot. Did he think if one was not rich and shrewd like Tom Buchanan but rather soft, polite and hospitable like Jay Gatsby, then one was bound to be played upon by the ambitious? Did he think that if one did not trample people, one would wind up bearing the consequences of the same action executed by others?

Perhaps he could not bear the magnanimous character he had created in Gatsby. Perhaps his alcoholism and womanising created in him a loathing for those who practiced self-control. If one could ask him these questions, wouldn’t it be fantastically splendid to know what he was thinking when writing Gatsby off to his tragic fate? Or would one be spared a cruel mocking because he didn’t consider it so deeply? He wrote a story, as simple as that.

Nick observes, “Dishonesty in a woman is a thing you never blame deeply.” This is as true as that was of the jazz age, I find this runs true today as well. We are still forcing women to live within an image we have constructed for them. That they must be kind, empathetic, forgiving, perennially patient, and always beautiful was an expectation back in the 20’s that remains the same today. The suffragettes and feminists may won us vaguely equal rights, but it is only now we are beginning to shatter stereotypes of women.

Forgive me for thinking that women were stronger back then. Daisy and Jordan, the two leading women in the story, play to the required stereotypes and make no apologies for who they are. They do as they please and they say what they please. But because they bear the appearance of conformists, they are never questioned or challenged. The story may as well have been about the two women who manipulated the men in their lives and never found themselves at a disadvantage. Consider Daisy’s cold-heartedness in dropping Gatsby yet again. Consider Jordan’s moving on without the courtesy of a conversation with Nick, which he only realised when he initiated the conversation with her.

The Great Gatsby is only 130 pages, but whatever you do, do not read it in one sitting. It is the sort of book you need to savour. Pause every time you read something that resonates with you. I found at least 33 quotes that resonated with me, and I’m sure upon the next re-read, I’ll find more. I’ll leave you with my favourite one. “A sense of fundamental decency is parcelled at unequally at birth.”

Let us know what you think about this review of The Great Gatsby and Sarina’s great review in the comments! No spoilers on this page, please!

Ready to read The Great Gatsby? Click to buy and help us pay for hosting.