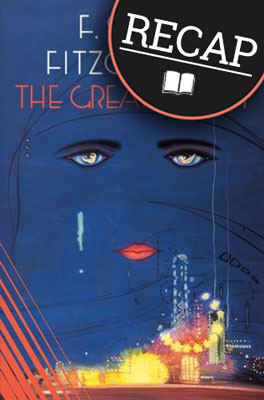 Read a full summary of The Great Gatsby by F. Scott Fitzgerald right here! This page is full of spoilers, so beware. If you are wondering what happened in The Great Gatsby, then you are in the right place!

Trigger Warning: This book contains 2 racist references; however, it may still be possible to read this book as the mentions are not longer than a word and sentence.

What happened in The Great Gatsby?

The book begins with Nick Carraway ending up in a modest house in East Egg, Long Island, New York. His house stood firm, surrounded by a grove of mansions, the one across from him being the most important to the story for it belonged to Jay Gatsby. That house was always full of people, and parties carried on all night.

Although he received invitations from the host of those lavish parties and he did attend them, Nick never actually met the host until much later. He did, however, go over to East Egg to meet his cousin Daisy and her husband Tom Buchanan. At Daisy’s house, he also met Jordan, who was a lot like Daisy. They were both beautiful, languid, and glamorous. Daisy and Jordan both had “impersonal eyes,” but from Daisy’s mention of her daughter’s birth and her wish that her daughter may be a fool, she revealed much of the pain she was carrying.

Nick ran into Tom on the train one day. This meeting progressed fast, with Tom taking Nick to meet his mistress Myrtle at her husband’s garage. After meeting up at the garage, Tom, Nick, and Myrtle headed to Manhattan under false pretexts. On arriving in Manhattan, Nick realised that Tom had acquired an apartment there for Myrtle. He also bought her a puppy that day, and they all headed to the apartment. They hosted a small party at the apartment with Myrtle’s sister Catherine and a neighbour couple. The party ended when Tom broke Myrtle’s nose at her mention of Daisy.

At a party at Gatsby’s house, Nick was with Jordan when he met Gatsby. Gatsby invited him to try out the hydroplane with him the next morning, and then he received a phone call. Gatsby always received cryptic phone calls which used city names as a reference instead of people’s names, causing people to think he was engaged in illicit activities. One day, Gatsby took Nick to lunch and tried to dispel some rumours that had been doing the rounds about him. Despite Gatsby’s efforts, Nick could tell he was lying. Something strange occurred at lunch: Nick and Gatsby bumped into Tom, but before introductions could be made, Gatsby disappeared.

Nick was a terribly observant person, and people also tended to open up to him. Jordan related to Nick how Daisy almost called off her wedding to Tom Buchanan. She was still in love with Gatsby, who was away with the Army at the time. After one of Gatsby’s parties, Jordan told Nick she liked him, and his first thought was to break up with the girl he had been writing to. In the course of these thoughts, he realised he was probably the most honest person he knew.

As Gatsby and Nick became better acquainted, Gatsby asked Nick to invite Daisy over to his place for tea. He specifically asked her to come alone and was excited and distracted for weeks, sporadically showing up at Nick’s door to discuss arrangements. On the appointed day, Gatsby sent flowers to Nick’s house. When Daisy showed up, Gatsby escaped from the back and re-entered from the front door. His arrival was followed by an emotional reunion of the former lovers. Gatsby and Daisy spent a beautiful afternoon wandering through Gatsby’s house with Nick in tow. Nick tried to leave, but they wouldn’t let him. [Why he didn’t slip out when they were distracted is beyond me. Perhaps when you read the book, you may discern why he didn’t.]

After that evening, Gatsby met Tom and Daisy a couple of times, including one time when they attended one of his parties. Then, one scorching summer afternoon, the Buchanans, Gatsby, and Nick headed to Manhattan in two cars. On the way there, Tom stopped at Wilson’s garage, where Wilson asked him to give him his coupe again. He told Tom with the money from the coupe, he could go west and make a fresh start with Myrtle.

Whilst Tom was reeling from Myrtle’s consent to leave him so unceremoniously, Myrtle was staring daggers at Jordan, thinking her to be Daisy. With these disturbed thoughts, they all headed to New York, where they rented a hotel room to decide what to do with the evening. In the hotel room, Gatsby tells Tom that he and Daisy are still in love and that she wants to leave Tom. When Tom asks Daisy the same question, she remains non-committal and claims to love them both.

After this uncomfortable discussion, they all headed back in the cars they came in. Gatsby and Daisy raced ahead and in the coupe. As they neared Wilson’s garage, Myrtle came running towards the car, expecting it to stop, but was run over. The car didn’t stop after hitting her. Tom stopped his car as they neared the garage as he saw the gathered crowd and realised that Myrtle had been fatally injured. He spoke to Wilson in private and headed back to his place, where Daisy had already gone in. Nick was waiting for his taxi when he met Gatsby in the garden. He wanted to stick around to make sure Daisy was okay. He eventually went home at 4 o’clock in the morning without Daisy ever having come to see him.

Tom and Daisy exhibited their selfish and callous natures when they left town immediately after the incident. It turned out Wilson had been told by Tom it was Gatsby driving the coupe when it hit Myrtle, but in fact, Daisy had been driving. Wilson was mad with rage and came to Gatsby’s house one afternoon. He shot and killed Gatsby in the pool and then shot himself a few steps away in the garden.

As Nick observed all this taking place right at his doorstep, he thought about Gatsby, a young boy named James Gatz, born to a modest family who dreamt big dreams. Life brought him in touch with a millionaire named Dan Cody, who left Gatsby twenty-five thousand in his will. But Gatsby was cheated out of that amount by Cody’s mistress. Yet he went on to make his own millions by working with Wolfshein, who was always by his side and successful when he was alive. But as soon as he was killed, Wolfshein joined the ranks of those refusing to be associated with him.

Nick met Gatsby’s father, Henry C. Gatz, and spent time with him before the funeral. Henry showed Nick Gatsby’s old daily planner with his day schedule scribbled in. After the funeral, Nick lost all interest in life on the East coast. He broke up with Jordan and moved away. The last thing he did before leaving was to erase an offensive word written by someone on Gatsby’s front steps.

Ready to read The Great Gatsby? Click to buy and help us pay for hosting!