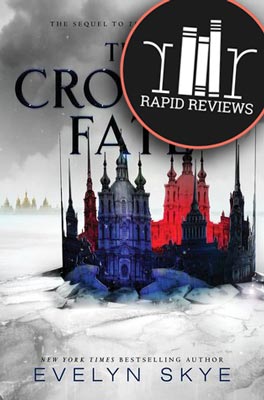 No spoilers in this rapid review of The Crown’s Fate by Evelyn Skye! I give it 3 stars. When I saw book 1, The Crown’s Game, advertised as perfect for those who love The Night Circus, I was excited and nervous. I felt the same trepidation when I heard similar buzz surrounding Caraval earlier this year. I get excited when I hear The Night Circus comparisons because it is my all-time favorite book. But I get nervous because I know most are not likely to compare to Erin Morgenstern’s masterful storytelling. Yet if I see this tagline, I’m almost always willing to give the book a try.

I think it’s fair to say book 1 in this series is a good read for those who love The Night Circus. It is about a magical competition between a male and female player who seem destined to eventually fall in love, after all. Was it as good? Not nearly. Was it a fun ride? Yes! The Crown’s Game had fun magical features conjured by Nikolai and Vika as they competed. And the bonus: it had a delightful imperial Russian setting.

Book 2 begins with the fallout from book 1. Nikolai appears to have perished, although Vika isn’t sure what his brief, ghostly appearance meant. Vika is the Imperial Enchanter, though it’s not quite the fun job it’s cracked up to be. Pasha is feeling regret over his actions at the end of book 1 as well as pressure since he will soon become the crowned ruler of Russia. And Yuliana is up to her normal scheming ways. She always has Pasha’s and Russia’s best interests at heart, although her methods are sometimes questionable. And she feels more pressure than ever to ensure her brother wears the crown and rules Russia as there is someone else after the throne.

The Crown’s Fate retained some of the magic I enjoyed in The Crown’s Game with a couple added twists. I often like when characters take a darker turn, and the sinister turn here was no exception. The scenario was reasonable, and it added drama that seemed like it would be hard to eventually reconcile. And I once again enjoyed exposure to the imperial Russian culture.

Yet I missed the competition and the creative, delightful magic it inspired, which was the highlight of book 1 for me. While the characters are likable enough, I somehow didn’t feel quite as invested in them and their fates this time around. Finally, it felt like the stakes weren’t high enough at the end, making the climax and aftermath a little cheesy.

Nevertheless, I recommend The Crown’s Fate to everyone who read book 1 in this series. While it’s not a favorite of mine, I enjoyed reading the conclusion to Skye’s story. And I recommend the duology if you enjoy a magical tale and are looking for a lighter read on the younger side of YA.

Let us know what you think about The Crown’s Fate in the comments! No spoilers on this page please. 🙂

Ready to read The Crown’s Fate? Click to buy and help us pay for hosting.