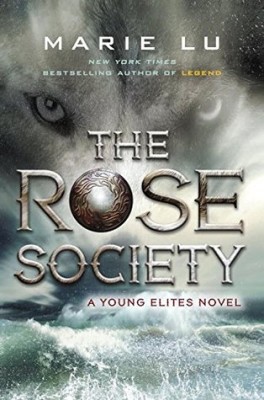 Marie Lu has penned a villain in the making.  It’s interesting to read how circumstance creates a person and how their decisions and even the decisions of others can lead a character down a path for good or a path for bad.  My preference in a book is for good to prevail and for characters redeem themselves.  This is probably why I only gave it 3 stars.  But many readers on both Amazon and Goodreads seem to love the premise.  Read on for a Rose Society recap.

Ratings
4.6 stars on Amazon
4.21 stars on Goodreads
Add The Rose Society at Goodreads

I give it 3 stars overall.
Lets be friends on Goodreads:

Main Characters and Other info
Adelina – Young elite, cast out of the Dagger Society and founder of the Rose Society, ability to make others see illusions, even believe they are in pain
Violetta – Adelina’s little sister, ability to temporarily take away another Elite’s power
Magiano – Member of Adelina’s Rose Society, ability to copy another Elite’s power
Sergio – Member of Adelina’s Rose Society, can control the weather
Maeve – Queen of Beldain, ability to raise people from the dead
Julietta – Queen of Kenettra, Enzo’s sister
Enzo – former leader of the Dagger society, killed by Teren, had the power of fire
Raffaele – member of the Dagger Society, can sense energy
Teren – lead Inquisitor of Kenettra, has the ability to heal himself
The Inquisition – group of inquisitors who “protect” the people from malfetto
Malfetto – someone who survived the fever and now has scars or side effects, even new, strange abilities
The Young Elites – malfettos with the strongest abilities

What happened? The Rose Society Recap:

Since being banished from the Dagger Society, Adelina and her sister Violetta have been on the move, traveling because they (and all malfettos) are being hunted back home in Kenettra by the Inquisition. Adelina still blames herself for Enzo’s death and is angry with the Daggers for casting her out.

The sisters search for a Young Elite that they have heard about through rumors. They find him and his name is Magiano. His power is that he can mimic any Elite’s power.

Meanwhile the Daggers are in hiding.  Maeve, the new queen of Beldain, is an elite as well. Her power is to bring people back from the dead, which is exactly what she did with one of her brothers.  She intends to invade Kenettra since Enzo is not on the throne. She asks Raffaele and his Daggers to help.  Maeve also wants to bring Enzo back from the dead and tether him to Raffaele. Reluctantly he agrees.

Adelina recruits Magiano to join her in overthrowing Giulietta, the Queen of Kenettra.  She wants to rule and save the malfetto. He says he will agree if Adelina makes him rich off of the royal treasury.

Meanwhile, Teren Santoro is still smitten with the queen of Kenettra. He believes it is his destiny to rid the world of malfetto even though he is one himself. Giulietta however just wants them punished and kept as well fed slaves. Teren will go behind her back if he has to in order to end them.

Maeve visits Giulietta in Kenettra and secretly brings the Daggers with her. Raffaele is to come between the queen and Teren and poses as a “gift” to the queen.

Adelina has a strange hallucinating episode in which she feels like she is being dragged into the underworld. After the scene she causes, they are pursued but manage to board a waiting ship. A boy, a mercenary on the ship can control the rain and helps them escape the harbor. His name is Sergio and he was once a member of the Dagger Society.

The Dagger’s plan is working, Teren is angry that Raffaele has been given to Giulietta and the wedge between them is growing.

Adelina and the crew aboard the ship run into trouble when a ship of Inquisitors boards them. Adelina and Violetta are discovered but Adelina uses a strong show of power to overtake the Inquisitors. The mercenaries on board now know her true potential. The group heads into Kenettra.

As soon as they reach land they spot Gemma in the crowd and know that the Daggers must be back in Kenettra. They follow her and eventually overhear the Daggers, new and old, talking about the plan to bring Enzo back. Adelina is not only disturbed by the thought of raising Enzo from the dead and tethering him to Raffaele (though she does want to see him again) but she also worries that the Daggers are handing Kenettra over to Maeve.

Together, Adelina (the White Wolf), Violetta (the puppet master), Magiano, and Sergio (the rain maker) form their own society: The Rose Society.  They will keep Maeve from taking Kenettra and Adelina will have her revenge on the Dagger Society.

As they attempt to sneak into the city, inquisitors search their boats and Adelina ends up killing them. Adelina realizes that she is starting to enjoy killing.

Raffaele seeks to make a deal with Giulietta by offering the services of the Daggers in exchange for mercy for the malfetto. They agree. Teren makes a scene in a jealous rage and Giulietta banishes him from the city.

The Daggers and Maeve are all to meet in the arena where Enzo died. But the Roses show up secretly and before Rafael can meet up with Maeve, Adelina ties him up and impersonates him using her powers. She goes with Maeve to raise Enzo from the dead.

Maeve is successful and Enzo is tethered to Adelina. The Daggers are furious and a battle rages between the Daggers and the Roses. But before they can finish each other off the Inquisition shows up and they scatter.

Raffaele has been keeping records of all of the Young Elites that he comes across. He is noticing changes in them. For example, Lucian’s bones are hollowing out.

Enzo and Adelina have a chance to talk and he seems quite normal. She tells him the truth of how he was raised but she doesn’t tell him everything about the Daggers and her betrayal to rescue her sister. There are voices in her head that are threatening to take over her mind.

The tether that binds Adelina and Enzo causes them to power struggle as they fight for dominance. Enzo cannot remember these exchanges after they happen.

There is a disturbance in the malfetto slave quarters. Teren is going to kill them all. While Enzo saves the people, Adelina has a conversation with Teren and tricks him into helping them into the palace. She promises that she will help him destroy the Daggers.

Queen Maeve’s Navy has arrived. Raffaele is to go to Giulietta the next day and kill her.  Adelina plans to go with Teren to confront the queen the next day as well.  That night Maeve’s men come and take Enzo back.

The next day when they reach the queen, Adelina paints a scene before Teren that tricks him into killing Giulietta.

After this there is an aerial battle on the backs of Balira, giant winged creatures. Gemma is struck by lightning and dies.

The battle rages on and Adelina sees Enzo. But the Daggers have told him about her and about the lies she has told. She uses her power to create a huge sea monster that frightens everyone. In the chaos they sneak onto Queen Maeve’s ship.

When they have reached Maeve there is a quick battle but Adelina is able to subdue Enzo and make him burn the entire fleet. Maeve gets away and Adelina turns on Teren. The inquisition is fearful of Adelina so they obey her and tie Teren up and promise to follow her. Adelina realizes that she does not need love or acceptance, only fear. Because fear is the most powerful thing and makes people obey.

The Daggers are defeated and Teren is her prisoner. Maeve has retreated.

How does The Rose Society end?

The Rose Society makes it back to the palace. When alone Violetta tells Adelina about Raffaele’s notes about the Young Elites. About how they are deteriorating.  Adelina sees the truth in her words and deep down she knows that her visions are destroying her mind. But the whispers in her head convince her to believe that it is a lie. Violetta starts to take her power away and Adelina tries to kill her. Later after Violetta flees and gives her her power back, Adelina realizes what she has done. She is regretful but the whispers soon creep in again and convince her that this is the best way. Adelina has taken her revenge and is now the ruler as she had always imagined. She sits on the throne in the empty throne room and waits for her satisfaction to arrive. But it never does.

There you go!  There is your Rose Society recap!

Ready to buy The Midnight Star?  Click to buy and help us pay for hosting!

14 thoughts on “The Rose Society Recap (The Young Elites #2)”