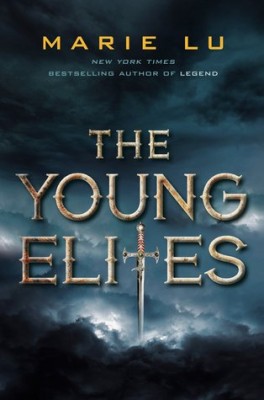 I was torn on this book. I did like it….but I didn’t like everything about it. So that this first paragraph won’t contain spoilers, I’ll post my thoughts at the bottom of this page after the recap. Read on for a full recap of this Marie Lu series starter.

I give it 3 stars overall.

Main Characters and Other info
Adelina Amouteru – new found young elite with very strange powers
Violetta – Adelina’s little sister, the favorite of her family
Enzo Valenciano – leader of the Dagger society and cast aside heir to the throne. Has the power to wield fire
Raffaele Laurent – member of the Dagger Society, can sense energy
Teren Santoro – lead Inquisitor of Kenettra
The Inquisition – group of inquisitors who “protect” the people from malfetto
Malfetto – someone who survived the fever and now has scars or side effects, even new, strange abilities
The Young Elites – malfettos with the strongest abilities
Setting – Kenettra, the Sealands

What happened in The Young Elites?

Adelina is a survivor of a widespread plague that left many with strange side effects. Her unnatural silver hair marks her as one of these survivors. That, plus the unfortunate loss of her left eye due to the fever, makes her a stark contrast to her perfect sister Violetta. They have a cruel father who resents Adelina for bringing him shame by being a malfetto, or “marked” plague survivor. One day Adelina overhears her father agreeing to sell Adelina to a strange man as his mistress. That night she attempts to run away but her father catches up to her. In her anger, somehow, she calls forth phantoms from the earth that move toward her father projecting her deepest dark desires. The phantoms startle her father and he is accidentally killed. Adelina is arrested and will be executed.

It is apparent that she is a Young Elite, a malfetto with very strong powers. When her execution date arrives, she is dragged to the square to be burned at the steak. The crowd cheers for her death and the head inquisitor, Teren, lights the fire under her. Her anger ignites and the magic returns. She realizes that she is able to create illusions. This is her power. She makes locusts attack the people on the square. Then a boy shows up and slices through the inquisitors. He is the Reaper and he saves her.

Enzo is the boy’s name and he is the leader of the Dagger Society, a group of Young Elites who seek out others like themselves before the Inquisition can. He also happens to be the prince and rightful heir to the throne. After he was marked by the fever as a malfetto his sister took the throne and her husband, a duke, became king. Enzo was kicked out of the palace.

Teren, the head inquisitor, is completely infatuated with the queen, Enzo’s sister. She uses him to do her bidding and he is helping her to stamp out the Young Elites. Only Teren himself is also a malfetto. He has turned against his own kind. Before the queen gained her title she had convinced Teren to pledge himself to ridding the land of malfettos for her. His power is that his body can quickly heal itself, making him near invincible.

When Adelina is well she meets the others in the Dagger Society and is tested with the gem stones. They find that she is the first Elite to align so strongly with Nightstone suggesting that there is something dark inside her. She begins slowly training with the other Daggers, including Raffaele who is nicest to her, to use and control her power. She doesn’t do well at first but eventually she harnesses her power when provoked with fear. The others are impressed and maybe even intimated. Adelina loves and thrives on their fear, the intimidation.

Their hideout is at a brothel called the Fortunata Court. While there she learns to fit in by hiding her hair and wearing a half mask to cover her eye. But eventually, Teren finally finds her. To her surprise he doesn’t arrest her but rather tells her in secret that he has captured her sister Violetta and promises not to harm her only if Adelina becomes a spy for him. He wants to know what the Young Elites are planning. She has no choice but to accept. The Dagger Society hasn’t officially accepted her, so finding secrets to feed Teren is difficult.

One day Adalina attends a horse race that one of the Elites is racing in. The Dagger Society is trying to win to get close to the king. The girl, Gemma, does win but her title is stripped from her because she is a malfetto. The crowd erupts at this decision and as a show of force Teren is going to kill Gemma. Adelina decides to do something. She uses the anger in the crowd to fuel her energy and is able to conjure images of cloaked Young Elites on the roof tops causing pandemonium. Gemma gets away but Enzo is unhappy with how reckless Adelina was. He also agrees to train her faster because he sees her great potential.

After that, they stop being so secretive with her and she trains with Enzo and befriends many of them. She gets very good at creating images that look perfectly real. Her guilt at being in her current situation changes her energy and Raffaele notices. Raffaele tells Enzo that he believes Adelina could eventually be dangerous when she realizes the full extent of her power. Raffaele also notices that Enzo is attracted to Adelina which could also be dangerous. Dante, another Elite doesn’t trust her at all.

The Young Elites cause a disturbance at a festival by setting fire to several boats. This is Adelina’s first mission and she does well creating illusions. But afterwards, as she is fleeing, Teren finds her and makes threats against her sister again. Dante and Enzo come to her rescue and Dante sees her talking with Teren. He later, after Adelina and Enzo share a passionate kiss, warns Enzo that he should get rid of Adelina and that everyone only tolerates her. Enzo tells him that Adelina is nothing to him and to mind his own business. Dante implies that Enzo is drawn to her only because Adelina reminds him of a former sweetheart that is now dead. Unfortunately Adelina overhears this conversation. Her devastation and emptiness causes her to run away and seek out Teren.

Dante finds her as she is sneaking around and accuses her of betraying them. They fight and Adelina finds that she can make him imagine that he’s feeling pain. She takes it too far and he dies.

Meanwhile back at the castle, Teren kills the king at the Queen’s request.

Adelina finds Teren and demands to see her sister. When they take her to Violetta’s cell, Adelina tries to cloak the two of them in invisibility but she is having a hard time fighting Teren off. Violetta is able to take Teren’s powers away. It turns out that she is a Young Elite as well. After they escape, Violetta explains that she has known for a long time. She kept Adelina’s powers at bay to protect her from their father. She can also feel when other Elites are near.

Using the king’s death as an excuse, Teren and the Inquisition gather up and kill malfettos. There is chaos on the streets. Teren has a gathering to speak to the people and try to draw Enzo out. Enzo is there and when he sees that Teren has captured Raffaelle, Enzo challenges Teren to a duel the following morning. Adelina and Violetta catch up to the Dagger Society and they make a plan to save Raffaelle. Adelina doesn’t tell them that she killed Dante or that she has been reluctantly working with Teren.

How does The Young Elites end?

The next day everyone is in place and Enzo fights Teren in the arena. The Elites and their supporters engage in a fierce battle. Adelina and Violetta help but eventually Teren wounds Adelina with a knife. In her confusion she mentally attacks Teren only to find out that it was really Enzo. Teren uses the distraction to stab and kill Enzo. Teren thanks Adelina for her help then all of the remaining Elites escape the arena.

Later Adelina finds that she is no longer trusted by the Dagger Society. She comes clean and tells them the whole truth but Raffaelle banishes her and Violetta from the group. Adelina’s heartbreak turns to anger. She hates everything in her past except her sister and even hates who she is. She chops off her hair. Her anger turns to a hard resolve, she makes plans to start a new society of her own. The Rose Society.

Epilogue:
Meanwhile faraway in Beldain, Maeve, the crown princess (and Elite) learns of Enzo’s death and of Adelina. She reveals that she wishes for control of Kenettra but her plans will now have to change. She visits her brother who she brought back from the dead. No one knows that she has this ability. But her brother now has a dark power in him that only she can unleash. She is going to bring him to Kenettra.

My thoughts on the Young Elites

As I mentioned at the top of this post I liked the book and I enjoyed reading it. It wasn’t a crazy page turner for me but I was pulled along to see how things would turn out. I read that Marie Lu wanted to write about a villain in this story. Maybe had I known that ahead of time, I would not have been disappointed in Adelina at every turn. I definitely have a preference for good to prevail…for people to find and act on their redeeming qualities. I wanted one of the other characters to take her and make her see the good in herself. She never saw it though and that was disappointing to me. But, there are two more books out there so who knows what will happen next. Or maybe I still have my hopes up that Adelina will redeem herself and find that spark of goodness and Marie Lu will only let me down in the coming books. We’ll see I guess! Did anyone else have a similar reaction?