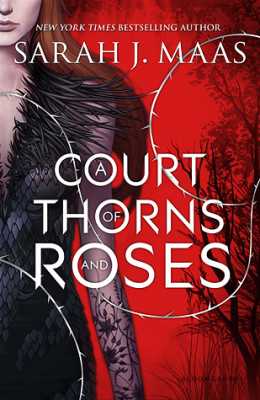 This is a great read based on the story of Beauty and the Beast. It’s a new twist on an old tale with faerie lore mixed in. I loved the creativity and the characters! It follows the Beauty and the Beast story as you might expect in the beginning but the end brings new and strange things that are both exciting and suspenseful.

Ratings
4.7 stars on Amazon (paid link)
4.33 stars on Goodreads
Add A Court of Thorns and Roses at Goodreads

Main Characters and Other info
Feyre – Heroine and human in this story
Tamlin – High Lord of Spring Court, golden hair and mask
Lucien – Courtier and emissary to Spring Court, Tamlin’s friend
Amarantha – High Queen of Prythian
Rhysand – High Lord of the Night Court
Setting – Spring Court, a part of Prythian, land of the Fae
Treaty – Created between humans and Fae 500 years ago, there is now a wall keeping magic and the Fae on one side and humans on the other

What happens in A Court of Thorns and Roses

Feyre and her family have fallen on very hard times. They find themselves shunned by high society and near starvation. The job of hunting for food has fallen to Feyre. One day she spots a doe to bring down but to her surprise, a great wolf attacks the doe first. She wonders if he is Fae in his wolf form but since she hates Fae she shoots him anyway with an ash arrow.

Not long after that, a wolf faerie comes demanding payment for the murdered wolf, a life for a life as stated in the treaty. Feyre chooses to go willingly to live with him in Prythian across the wall rather than be killed. The wolf faerie, Tamlin lives in a beautiful and large manor. He is High Lord of Spring Court. Here she also meets Tamlin’s friend Lucien. To her surprise, she is not harmed or even locked up.

All of the household, including Tamlin, wear masks. Feyre learns that they wear them because there is a plight in the land that is effecting magic and the masks are magically attached. They are searching for a cure to the plight and are afraid that it might someday spread to the mortal lands. This worries Feyre since her family is there unprotected. She also worries that they are starving without her to hunt for them. Tamlin eventually assures her that he has made sure that they are taken care of.

While there, she is learning to fill her idle time. Tamlin, it seems, is trying to befriend her. He offers to teach her to read and gives her painting supplies but she is reluctant to trust him or like him. As time passes Feyre realizes that Tamlin and Lucien are not giving her the full story of what is happening with the plight over Prythian. To get answers she ensnares a Suriel, a type of low Fae, which is compelled to tell the truth. He shares that the faerie kingdom Hybern, ruled by a wicked and powerful king, resents the treaty with humans. One hundred years ago he sent his own Fae over to spy and infiltrate the other High Fae courts. Then fifty years ago one of his commanders disobeyed him. Before more could be told, Feyre is attacked and Tamlin comes to her rescue. The two of them begin a sort of truce after that.

Strange “warnings” of a sort begin happening. For example, a summer court faerie is found with his wings ripped off, dying. He says that “she took them”. Feyre overhears more and more conversations about “her”. She later finds out that they are referring to the self-proclaimed queen of Prythian, Amarantha.

Soon there will be a solstice celebration. Feyre and Tamlin sneak off to a field where they kiss. The next day the handsome High Lord of the Night Court, Rhysand shows up and discovers Feyre there. He is known for being close to the queen. Tamlin begs him not to tell Amarantha about Feyre. He makes threats and promises nothing. Feyre lies and tells him her name is Clare Beddor. After that Tamlin decides to send Feyre back home to the human realm. But not until after one last intimate night together.

Back home she finds her family more than taken care of with a huge house and more. Weeks pass and another manor is burned to the ground. It was the family of Clare Beddor, the fake name she had given Rhysand. Feyre decides to go back because she knows things must be terribly wrong in Spring Court.

She makes her way back only to find the manor ransacked and nearly empty. Only Alis, a servant, is still there. She tells Feyre of Queen Amarantha. The Queen came as an emissary from Hybern 100 years ago. She fought in the mortal war alongside her sister Clythia until Clythia fell in love with a mortal worrier Jurian who eventually betrayed Clythia. Amarantha has hated humans ever since. She came without her king’s permission and wishes to take Prythian for her own. Fae have been her slaves for 49 years after she stole part of their power. She says that Feyre could have ended it all. A curse was put on Tamlin after his refusal to become Amarantha’s lover and consort. He has to find a human girl who has killed a Fae out of hatred then make her fall in love with him. All of Spring Court was magically unable to tell Feyre these things. Feyre does love him…but she never told him.

What's your favorite book to movie (or TV)? #shad

Have you read the selection series? What did you t

It's #IndieWednesday, and I wanted to tell you abo

😭😭😭 What's your opinion on dog-ear pages?

Feyre asks Alis to take her to Amarantha so that she can rescue Tamlin. Alis tells her there is one more thing that she wants to tell her but her mouth is magically shut to it. Feyre is immediately found and taken to Amarantha. Tamlin pretends not to know her. Feyre is forced to make a deal with the Queen. She is to complete three tasks, one a month, and if she does Tamlin and all of the Fae Courts will be free. Or at any time she can solve a riddle and they will be freed immediately.

She completes the first task but her arm is badly wounded and infected. Rhysand heals her but she is forced to make a deal with him as well. She must, after this is all over, spend a week of every month with him for the rest of her life. He puts a tattoo on her arm and hand marking their deal. After that Rhysand forces her to be his escort to parties to flaunt her in front of Tamlin who is not even allowed to visit Feyre.

Her second task is to solve a riddle to save herself and Lucien but she can’t read. Rhysand is able to help her through the eye tattooed on her palm. He later admits to her that he wants to be free of Amarantha and hopes that she wins and that Tamlin rips her to shreds.

The third task is simply that she kill three innocent Fae. They come out, heads covered and it is difficult but she kills the first two. Three lives to free all of the Fae, she tells herself. But when they take the head covering off of the third innocent Fae, it is Tamlin. She doesn’t know what to do until she begins to remember all the times that Tamlin let her overhear things. She guesses correctly that he has a heart of stone (this was Alis’s final secret that she couldn’t reveal) and shoves the dagger in his chest. As he is slowly healing Amarantha is livid. She says she didn’t say when she would free them and refuses to do it. She starts magically breaking Feyre’s bones. While in pain, Feyre is able to solve the riddle that the queen gave her. As specified in that bargain, all of Spring Court is released immediately.

How does A Court of Thorns and Roses end?

Tamlin attacks and kills Amarantha but she has already broken Ferye’s neck and she is dead. Feyre’s soul is able to watch everything that is happening through Rhysand due to their bond. As Tamlin cradles her all the High Fea offer up magic and Feyre becomes an immortal High Fae.

The mountain is destroyed but Feyre feels like there is a hole in her soul because of the innocent Fae she killed. She is still tied to Rhysand and will have to spend time in the Night Court as promised. She, Tamlin, and the rest of Spring Court go home.

**We need you: We are looking for someone to recap the rest of this series. Click here if you are interested.***

Do you have any theories about this series? Are you excited to read the next book? Let us know in the comments!

Ready to buy A Court of Mist and Fury or A Court of Wing and Ruin or a Court of Frost and Starlight (paid links)?  Click to buy and help us pay for hosting!