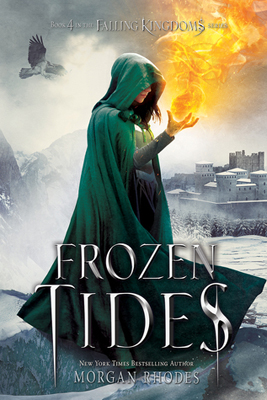 Read a full summary of Frozen Tides, book #4 of the Falling Kingdoms series, right here!  This page is full of spoilers so if you haven’t read this book yet click here to read a spoiler-free Rapid Review of Frozen Tides. If you are wondering what happened in Frozen Tides…you are in the right place!

What happened in Frozen Tides

Prologue: We see King Gaius as a child being told by his mother (who is secretly a witch) that he will be the one to find and claim the Kindred.

Frozen Tides picks up where Gathering Darkness left off. Magnus, Cleo, and Nic watch as Princess Amara of Kraeshia sails away with one of the Kindred, an orb containing the essence of water magic. Lucia had run away with Alexius, who is now dead, but she has now promised to help Kyan, the Kindred of fire magic. They are traveling in Paelsia. King Gaius remains in Auranos and we have yet to find out whether or not he knows about Magnus having disobeyed him and saved Cleo rather than allow her to be executed for suspected treason. Jonas and Lysandra are in Auranos and have the earth Kindred. Felix who now has the air Kindred after stealing it from Jonas is also in Auranos.

I give it 4.5 stars overall.
Friend/Follow me on Goodreads:

Magnus claims power of the throne in Limeros from Kurtis the kingsliege that his father had placed in charge in his absence. Kurtis is a long time boyhood enemy of Magnus. Magnus tries to convince his father through a letter that he was doing only what was right all along.

Jonas and Lysandra try to intercept and assassinate the king before he departs on his journey to Kraeshia but they are too late. Jonas obtains a shoulder injury that is infected beyond healing. They must find a witch or he will die.

Lucia and Kyan are on a mission to find a portal to the Sanctuary so that Kyan can kill Timotheus, who he believes is the only remaining person who could imprison him again. All of the Kindred orbs contain a magical being like Kyan. Lucia can use magic that she inherited from Eva to compel truth and obedience from mortals. Lucia wants to find her birth father.

Felix tries to get back into the good graces of the king, having skirted his spy duties for a while. He gives King Gaius the air Kindred and becomes the king’s bodyguard for his trip to Kraeshia.

Amara does not receive a warm welcome from her father the emperor of Kraeshia. She has a chat with her grandmother where we learn that, in a fairly common Kraeshian ritual, the king succeeded in killing Amara, his unwanted daughter. But before the ritual, her mother had given her a potion that would save her, while taking Amara’s mother’s life instead. In short, Amara was raised from the dead as a baby. Amara has ambitions to be the first queen of Kraeshia and eventually rule the entire world. She does not tell her father that she has the water Kindred.

Cleo is allowed to sit in on council meetings in Limeros with Magnus and Kurtis. Many of the older members think a female is unfit for this. Cleo makes a suggestion in exporting wine to help with the growing cost of the war and the imperial road. Magnus thinks it is a good idea but some don’t because alcohol has been prohibited in Limeros for a long time.

Jonas is nearing death because of his wound until they finally find a witch named Olivia who heals him and then joins he and Lysandra on their new mission: to travel to Limeros and kill Magnus. He attempts the assassination but they, along with Cleo, end up agreeing to work together with Magnus to kill King Gaius instead.

Cleo becomes confused over her unwelcome feelings for Magnus. Nic reminds her that he is her mortal enemy.

Lucia and Kyan arrive in Limeros seeking the stone wheel that will allow Kyan to travel to the Sanctuary. Lucia uses mind magic on Magnus to learn of its location but they find that the wheel’s magic is gone. They leave in search of other wheels but they all have been drained of magic. Lucia starts to question herself for aligning with Kyan. Together they travel across Mytica spreading destruction and searching for more gateways. Timotheus visits Lucia in her dreams and tries to convince her to not help Kyan. She refuses to listen.

King Gaius and Felix arrive in Kraeshia. While there, Amara’s father joins the king and Amara in marriage as a union of their two lands. Gaius claims to have all four Kindred though he only has one. Amara poisons her father and brothers and blames it on Felix who is thrown in the dungeon to be tortured. Amara is now empress.

Lucia finds that her biological father is dead but she is able to meet her sister, Laelia. Lucia is very disappointed and not surprised that Laelia wants help from her. She and Kyan continue their travels and later run into Jonas and his friends. Kyan kills Lysandra, and Olivia is outed as a Watcher sent by Timotheus.

Jonas and Nic travel to Kraeshia to represent Magnus and to kill King Gaius but upon arrival, they meet up with Kraeshian revolutionaries led by Mikah, one of Amara’s servants. They break Felix out of prison and find that King Gaius has already headed home to Mytica with his new wife. Jonas sends Olivia in hawk form to warn Magnus and Cleo that Gaius and Amara are on their way to take over Mytica.

Lucia is again visited by Timotheus who lets her know that her power is lessening due to Alexius’s baby that is growing in her belly.

Magnus finds the earth Kindred hidden in Cleo’s room and they have yet another falling out. Magnus throws the magical orb against the throne room wall and the result is an earthquake.

How did Frozen Tides end?

King Gaius is convinced that he must kill Cleo to win back Magnus. Cleo calls for the Limerians to support Magnus as their King. The Kraeshians soon storm the castle and kidnap Cleo. Magnus sets out to rescue her but gets lost in a snow storm. Cleo manages to escape and she and Magnus end up at the same remote cottage to hide out for the night where they declare their love for each other.

Lucia and Kyan learn that magic is contained within the mountains and they travel there. They disagree on whether or not to destroy the whole world and Lucia defeats Kyan in his own blast of fire. It’s not clear where he has gone or if he is truly dead. At that same moment, Lucia’s half immortal baby in her belly allows her to travel to the Sanctuary where she realizes that the Kindred must not be released and that she must make amends.

Cleo and Magnus are found by King Gaius. He tells Magnus to kill Cleo to redeem himself but Magnus fights back instead. Cleo threatens to drop the earth Kindred over a cliff to make Gaius stop. When she finally does drop it, the king tumbles over the edge in the following earthquake. They find his body but he is not quite dead yet. They also find the dropped Kindred and leave the king to go plan their war. Limeros is now loyal to Magnus.

Jonas, Nic, and Felix board a ship back to Mytica. They bring with them Theon’s vengeful twin brother. (Theon is Cleo’s first love who was killed by Magnus.) As the book closes they spot, Prince Ashur Cortas nearing them. The prince, Amara’s brother, is a shocking sight since Amara killed him in a Mytican temple.

There you go, that’s what happened in Frozen Tides!  There’s your full Falling Kingdoms book 4 summary!