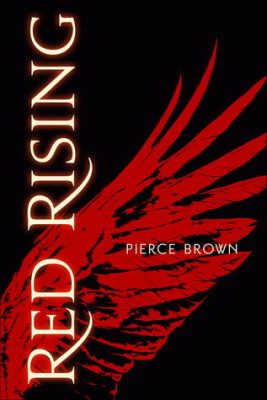 This is a very cool science fiction debut novel by Pierce Brown.  I thought it was quite similar to the Hunger Games in some ways but that didn’t bother me at all.  I had that same need-to-read-more-right-now feeling with Red Rising that I had with Hunger Games.  I definitely liked it!

Main Characters and Other info
Darrow – Youngest ever Helldiver on Mars.  He is 16 and a Red.
Eo – Darrow’s young wife (they were married at 16 because the young people are required to…they are also very much in love)
Cassius – Darrow’s first friend at the academy.  Also the son of an important Fleet leader in The Society.
Fitchner – Proctor of House Mars
Mustang – Friend of Darrow and member of House Minerva
Helldiver – The most talented miners that drive the rigs.  They mine for helium-3.
Setting & Society – It is set on futuristic, terraformed Mars where people are divided into color classes.  Golds are on the top and Reds are at the bottom.  Their ancestors are from Earth.

What happened in Red Rising?

Darrow is a Helldiver in the Red class of society living on Mars.  The Reds are working to terraform Mars to make it fit for the rest of the humans.  They are governed by the hierarchy rules of The Society and the Gold class is at the top of the pyramid.

Darrow’s wife Eo tries to convince him to rise up and do something about the way society treats the Reds.  They are basically slaves.  Darrow is reluctant to cause any trouble because his father once took a stand and he was executed for it.  One night Eo shows Darrow a place she found. It is a domed space that opens to the sky and holds vegetation and animals. Reds never see the sky or anywhere besides the mines. The Golds are keeping secrets from them.

As they sneak back they are caught and are to be flogged the next day for trespassing.  A famous Gold named Nero au Augustus the ArchGovernor of Mars is there at the flogging. Darrow is flogged first and then Eo. After a few lashes, Eo begins singing a forbidden song.  She is then hanged as punishment.  She screams “Break the chains” just before the end.  The whole thing is televised.  After that Darrow goes and gets her body and buries her which is also against the rules. He will now also be hanged. His uncle gives him a drink that makes him feel funny just before he goes to the gallows.

Darrow wakes up later in a grave and two Reds of Ares pick him up.  They take him to the leader of Ares, Dancer, and he shows him that the Golds and other colors have been living on the surface of Mars for hundreds of years. It is already completely terraformed and they keep the Reds as their ignorant slaves. They have a mission for Darrow and he accepts.

Dancer takes him to a man named Mickey, a carver (futuristic plastic surgeon), who will turn him into a Gold. Darrow’s time as a Helldiver has given him street smarts and dexterity.  They alter his brain and his body. New skin, stronger bones, etc. They transplant new golden eyes and teach him manners and grace.

Months later he is accepted into the academy for Golds. There the students are divided into 12 houses and Darrow is chosen for House Mars.  On the first morning of “class” they are paired off, someone from the top of the class with someone from the bottom. They have to fight to the death in a small room. Darrow is forced to kill Julian, the younger brother of his new friend, Cassius.  Darrow keeps who he killed a secret as do most of the students.  Darrow realizes that the Society likes to keep a wedge between people with secrets and lies.

After that, they are taken to a large remote location where each House has a castle and they fight to keep power and land. They can acquire slaves by capturing students from other houses. They mark them with their standard (a scepter of sorts).

House Mars is divided almost immediately. They form clans within their House. Darrow and Cassius lead one group and the ruthless Titus leads another. Tensions run high when Titus’s group starts going hungry. They come up with a plan to take down Titus, who has taken control of the castle.

Darrow and Cassius head out in search of other houses and they come across a girl from House Minerva who they call Mustang.  They use the Minervans to storm and take House Mars from Titus. Meanwhile, Darrow and Cassius raid Minerva Castle and steal their standard.

They go back to their own castle to confront Mustang with her stolen standard.  They win their castle back but Mustang escapes.  The title of Primus of House Mars should have been awarded to Darrow by the proctors but it was not.

The Proctors, who stay on Olympus, a floating mountain just above the institute arena, act as sponsors to the houses.  Each house has one.  They can come down and watch the proceedings by floating in the air just above using their GravBoots.  The action is also filmed and televised for people on the outside.

Even though Titus is killed, House Mars is still divided. There is little respect or loyalty. There are several mentions of someone named the Jackal who is another house leader and a strong opponent.  Darrow doesn’t know anything else about him.

Eventually, the Jackal sends Cassius a video of Darrow killing his brother Julian. Cassius then lures Darrow away from the castle and challenges him to a duel. Darrow is stabbed in the stomach and Cassius leaves him for dead.

Mustang finds Darrow and over many weeks she nurses him back to health. One day Fitchner, proctor of House Mars, tells Darrow that the game is rigged. The Jackal is meant to win. His father is the ArchGovernor…the man that sentenced Eo to death. The Proctors have been bribed and threatened to make it happen.

Darrow comes up with a new plan. He starts gathering an army from among the Deserters (students marked as slaves but who ran away). The new army will not have slaves. Everyone will work together as equals. This system works great and his army grows.  They easily take a few of the other Houses.

The Proctors soon start cheating by thwarting Darrow’s plans but they are able to take House Jupiter anyway.  Darrow comes face to face with the Jackal but unfortunately, he escapes.  The Proctor of House Apollo, who has already tried more than once to kill Darrow, tells him that the Proctors have kidnapped Mustang and she is prisoner on Olympus.  Darrow kills Apollo by stabbing him in the eye.

Darrow and his team use stolen GravBoots to fly up to Olympus. They take down or tie up most of the Proctors and save Mustang. Darrow kisses her then sends her and half his army to face the Jackal where he is hiding out. Fitchner then delivers the bad news that Mustang is the Jackal’s twin sister. Darrow believes that Mustang will betray him by joining with her brother.

Darrow and the rest of the army rush back to Mars castle and quickly overtake it to replenish their numbers. Cassius is still leader there and gives the Primus badge to Darrow but he also swears an oath that whenever he and Darrow come face to face again they will fight to the death.

How does Red Rising end?

Darrow prepares for Mustang and the Jackal to attack.  But they don’t attack. Mustang brings her brother and his men (now enslaved to her) to Darrow and acknowledges his rule. Darrow has won the game.

The Drafters and the ArchGovernor show up to signal the end and to acknowledge Darrow as the winner.  He will get to pick whatever apprenticeship he wants among the Drafters. The ArchGovernor admits to Darrow that he cheated but in exchange for silence on that matter, he also offers Darrow a position under him. Darrow doesn’t want to but since the ArchGovernor is the most powerful man on Mars, it is his best chance to excel in society. For Eo and for the Reds, he accepts.

There you go! That’s what happened in Red Rising. Hope you enjoyed this Red Rising summary with spoilers.