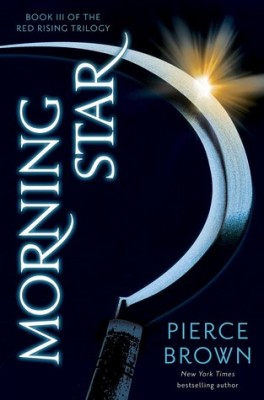 I love love love this entire trilogy by Pierce Brown.  No let-down in THIS sequel.  In a word, I would describe the whole thing as epic.  Read on for what happened in Morning Star:

I give it 4.75 stars overall.
Let’s be friends on Goodreads:

Main Characters and Other info
Darrow – The main character, a Red secretly turned Gold, though the secret is now out
Eo – Darrow’s wife who was killed standing up for Reds
Cassius – Darrow’s former friend and new enemy
Octavia au Lune – Often goes by “the Sovereign” and is the leader of The Society
Mustang – Gold warrior and Darrow’s sometimes girlfriend
Sevro – Darrow’s best friend and new leader of the Sons of Ares
Victra – Gold warrior and Darrow’s friend
Roque – Darrow’s former friend from the Academy
The Jackal – Mustang’s conniving brother and new ArchGovernor of Mars
Ragnar – An Obsidian fighter who has joined Darrow
Sefi – Ragnar’s sister
Quicksilver – A gray and most wealthy man in society
Setting & Society – It is set in a futuristic solar system where Mars, Luna, and other moons and planets have been terraformed.  All people are divided into color classes.  Golds are on the top and Reds are at the bottom.  Their ancestors are from Earth.

After being captured at the end of book two Darrow is now being held by the Jackal (who is now ArchGovernor) as a prisoner “on loan” from the Sovereign. He spent three months in interrogation then another nine months in a box in complete darkness. As he is to be moved from the Jackal’s fortress back to the Sovereign for dissection the Sons of Ares are able to break him out. Though Darrow was believed to be dead, Sevro never gave up and finally found him. He has been leading the rebellion in Darrow and Fitchner’s absence which is near falling apart.

Darrow’s family is alive as well as Dancer. They were able to also rescue Victra from the Jackal. Darrow’s integration back into the world is rocky, and his body needs much healing.

Tens of thousands of low color refugees have flooded near the Ares base. There are skirmishes all over Mar’s, and much of the Society is consumed with the Moon Rebellion. Roque leads the Sovereign’s fleets.

After a time of recuperating Darrow is strong again and has been going on small missions. His first big job is to travel to a moon called Phobos that houses a Helium-3 station and a city mostly run by Quicksilver, a silver and the richest man in the galaxy. They are to kidnap him and bomb the station, throwing the economy into chaos. Sevro’s plans become reckless and when the group of Howlers reaches Quicksilver they find him with many powerful Golds, including Mustang, one of the Sovereign’s guards, and Cassius. The fighting is brutal, but they manage to kidnap Quicksilver as well as Kavax, Mustang’s friend. Darrow learns that Mustang may still be on his side and that Orion still has control of his ship, the Pax. As they escape Quicksilver’s building, Darrow takes leadership from Sevro for a time putting a wedge between them.

When they reach the Ares hideout on this moon, Darrow and Sevro finally come to blows. They fight but in the end, they become stronger friends than before, and Sevro gives control over to Darrow. They learn that Quicksilver is a Son of Ares and leads the rebellion of high colors. Instead of abandoning the Reds and other low colors on Phobos they rally an army and broadcast across the entire society that Darrow is back from the dead and that they will rise together and break the chains. As the uprising continues, Darrow and Ragnar leave on a luxury vessel disguised as fleeing Golds. Mustang surprises them by showing up and requesting to come along. It is revealed that Ragnar had freed Kavax and asked him to send Mustang. They warily allow her to join.

As they blend into other vessels heading for Mars, they realize that they are being pursued by a ship which soon starts firing on them. They crash into the ocean near the frozen shore. They travel to the remains of the other ship which also crashed. They avoid cannibal Obsidians and are able to stay for the night. They realize Cassius was aboard the ship and he and Aja are on foot. They start tracking them so that they can put them down once and for all. After battling them Cassius has an arrow through the neck but is still alive, and Aja has fallen down a cliff, Ragnar is dying from his wounds, and Ragnar’s sister, Sefi, arrives with other Obsidians. Sefi realizes that they are friends of Ragnar. Ragnar dies and they all fly to the Obsidian city. Aja’s body was not found.

When they arrive at Ragnar’s old home, Darrow and friends are chained up and thrown in a cell until they meet with Queen Alia. Obsidians believe that the Golds are Gods, but it is apparent that Alia has long known that they are mortals but chooses to keep it from her people to protect them. She orders Sefi and her crew to deliver Darrow’s group to the Golds that oversee the Obsidians. Darrow is able to talk Sefi into testing these “golden gods” who fail their test. Sefi then kills her mother and becomes queen. The Obsidians join Darrow’s army.

When they rejoin the Sons they learn from their prisoner, Cassius, that the Jackal has been secretly hoarding fuel and has stolen several nuclear warheads. Darrow believes that they need to take the war away from Mars. They travel to Io, a moon of Jupiter, where they meet with the newly self-appointed ArchGovernor of the moons, Romulus. He is in need of help against the Sovereign (who is not happy about their Declaration of Independence). But Darrow also needs his help. To Darrow’s surprise, Roque is there, and the ArchGovernor wants both men to plead their case, and he will decide which of their forces the Moons will join. Darrow and Mustang are able to make it seem that the Sovereign was moving the nuclear warheads against the Moons. They join Darrow.

The battle of Ilium begins. There is a great battle in space between Darrow’s forces and Roque’s forces. Darrow is able to outsmart him though and takes the bridge of Roque’s vessel. Roque kills himself even though Darrow would have welcomed him back. After that Victra Chase’s down her sister Antonia’s fleet and takes back her family’s ships, her birthright.

With a stronger fleet, the Rising travels back to Mars to face the Jackal. On the long journey, Darrow spends some time with Cassius who is still a prisoner. Later they receive a video from the Jackal showing him killing Darrow’s uncle Nerol who was loved by many of the low colors. This causes riots among the fleet. Let by Sefi, she and many others gather up a few Golds and execute them. Just as they are about to kill Cassius, Sevro saves him and gives a speech that ends the riot. Later Victra proposes, and she and Sevro are married.

How did Morning Star end?

We learn that they weren’t headed to Mars after all but rather to Luna to face the Sovereign. They assume they have tricked everyone. When they near Luna, Mustang, Darrow, and Sevro attempt to free Cassius but he and Antonia overtake them and escape to Luna bringing the three of them along. Sevro is killed, and his body is brought along. When they arrive, they see that the Jackal is there as well as Aja. The Jackal’s fleets are waiting to ambush the Sons when they attack. The entire group is taken to the Sovereign’s underground bunker where she is holding council. They are going to broadcast live the execution of Darrow and the rest. But just as it is about to happen, Cassius steps in and cuts down the guards. The entire escape to Luna was their plan all along. Cassius, Mustang, Darrow and the revived Sevro kill the Sovereign and finally Aja. The entire solar system sees the live footage. Mustang is declared the new Sovereign and the Jackal is hanged. They begin the very slow process of rebuilding society.

Weeks later on Earth Mustang tells Darrow that he is a father. In the epilogue, we learn that after their iron rain on Mars and his capture, Mustang went into hiding until little Pax was born. She tells him only now that she is sure he can be trusted and will devote himself to rebuilding as much as he devoted himself to fighting.

There you go! That’s what happened in Morning Star. Hope you enjoyed this Red Rising summary with spoilers.

Ready to read Iron Gold?  Click to buy and help us pay for hosting!