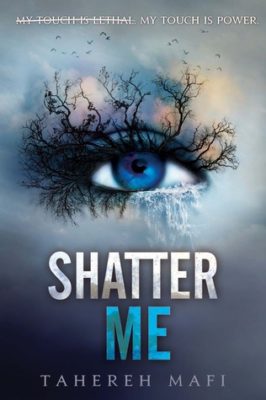 Read a full summary of Shatter Me by Tahereh Mafi now!  This page is full of spoilers so beware. If you are wondering what happened in Shatter Me, then you are in the right place!

Recap Contributor
This recap was awesomely submitted by Ruth from The Cat and the Kindle.  Thanks Ruth!
Check out thecatandthekindle.tumblr.com and find them on social media at @catandkindle.

Ratings
4.5 stars on Amazon
4.0 stars on Goodreads
Add Shatter Me at Goodreads

What happened in Shatter Me?

This recap was awesomely submitted by Ruth from The Cat and the Kindle.  Thanks Ruth!
Check out thecatandthekindle.tumblr.com and find them on social media at @catandkindle.

Sixteen-year-old, Juliette Ferrars is in a cell. She has been there 264 days, alone. She has seen no-one and spoken to no-one. Food comes through a slot in the door, once or sometimes twice a day. Once a day her cell opens and she can walk along unlit stone passageways to a toilet and shower. Her mind is breaking down. She repeats things, she counts things, she scribbles her thoughts in a small notebook, then crosses out the bad thoughts. She stands at the window daydreaming of birds. At night she dreams of a bird with golden plumage, flying in the sky.

Juliette’s touch can inflict intense pain. She was incarcerated after she killed a small boy trying to help him up when he fell. Her parents hated her and wanted rid of her.

She is joined by a cellmate. A boy who takes both beds and both blankets and ignores her. Juliette stays huddled on the floor. She is terrified of hurting the boy.

The boy begins to talk to her. He wraps her in both blankets when he sees her shivering. The boy is called Adam Kent. He went to school with her when they were younger. Juliette witnessed him being violently abused by his father. He doesn’t seem to remember her.

Adam takes her to an army compound where there is a bedroom with an ensuite bathroom and a wardrobe full of clothes and shoes in her size. She is introduced to Warner, the commander of Sector 45. He is only nineteen but very self-controlled. His father is the Supreme Commander of the North American Area hence his position of power. He wants Juliette to torture people with her touch for him, in return, he will keep her well fed and in good conditions. He seems to want more than just a professional relationship with Juliette though. She witnesses Warner shoot a soldier he says has been stealing supplies.

Adam who is now her guard reveals he, not only remembers her but has always been in love with her. He volunteered to go into her cell (to check her sanity) so that he could get to her and help. Moreover, he is immune to her agonizing and sometimes lethal touch. He has a tattoo on his chest of a bird with golden plumage. It is the same bird Juliette dreams of. They make plans to escape together.

Warner puts Juliette into a room full of traps. She has to rescue a small boy but has to touch him and hurt him to do so. Juliette is so angry she barrels straight through a concrete wall to get to Warner. She doesn’t know how she did it.

The time comes to escape, Warner tries to stop them. He touches Juliette but doesn’t seem to feel pain. They escape and go to Adam’s home where his younger brother, James is living.

Next day another soldier Kenji turns up and offers to take them somewhere safe. Soldiers arrive and they all go on the run.

How does Shatter Me end?

Adam and Juliette are separated from Kenji and James. Juliette and Adam are captured by Warner who tortures Adam, then tells Juliette he loves her and kisses her. She steals his gun and shoots him. She claws her way through a thick steel door to rescue Adam. They rejoin James and Kenji and go to the safe place.

The place is called Omega Point and is a rebel base. It is run by a man called Castle. Castle explains that many people there also have special powers and that Kenji was sent for Juliette. They have a suit ready for her to cover her skin so she doesn’t have to worry about hurting people by accident.

The Omega Point people are preparing to fight the Re-establishment. She decides to join them.

There you go! That’s what happened in Shatter Me. Hope you enjoyed this recap of Shatter Me with spoilers.

Ready to read or re-read Shatter Me or the other books in the Shatter Me series? Click to buy and help us pay for hosting!