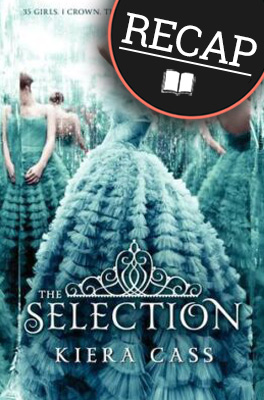 Read a full summary of The Selection, book #1 in Kiera Cass’s Selection series. This page is full of spoilers, so beware. If you are wondering what happened in The Selection, then you are in the right place!

What happened in The Selection?

America Singer lives in a dystopian society called Illea. It makes up what was once North America. Society is divided into eight castes, with Eights at the bottom and Ones (or royalty) at the top. America and her family are Fives, the artists’ caste. They make enough to live on but sometimes go to bed hungry in the winter.

America’s mother wants her to enter a televised event called The Selection. The Selection is conducted when a prince of the royal family has come of age and needs to choose a wife. If America were chosen to enter The Selection, even if she didn’t win, it would tremendously help her family’s financial situation.

But America doesn’t want to enter because she has a secret boyfriend, Aspen Leger. He is a Six, and they have been seeing each other for two years. America knows her mother would never want her to marry below her caste.

To America’s surprise, Aspen encourages her to enter. He says he will never forgive himself if she doesn’t at least try for a better life. As a bonus, America’s mother bribes her with the prospect of earning her own money if she will enter. America doesn’t think she stands a chance but enters to appease them both and to save money for a future life with Aspen.

But sadly, Aspen breaks off their relationship, and she even sees him with another girl.

To America’s astonishment and her mother’s delight, America is picked as a candidate. She and 34 other girls are whisked away to the capital.

On her first night, she has a panic attack when she tries to go out to the garden and get fresh air. Prince Maxon happens upon her and escorts her out. America admits to him that she is only there for the money and food and also that her heart is already taken. Maxon is surprised, but they agree to be friends. America will help him select a wife. She’ll be his spy of sorts.

America makes a few friends among the candidates, including a girl named Marlee. On the other hand, another girl named Celeste tries to sabotage other candidates. There is a fair amount of caste drama, especially since America is of a lower level than most.

America learns there are two groups of Rebels when one of them attacks the castle. Luckily she manages to keep her wits during the attack. Several girls are sent home afterward.

As the days go by, America and Maxon spend much time together. They have a secret hand gesture to let each other know they want to meet up, and they seem to enjoy each other’s company. The other candidates slowly begin to trickle away.

America informs Maxon how bad the living conditions are for the lower castes. He decides to distribute the money meant for candidate payment differently and according to caste. The money saved will go to helping the people.

How did The Selection end?

America is shocked one day when she sees Aspen at the castle. He has joined the military and is stationed as a castle guard. He sneaks into her room and tells her he made a mistake and still loves her.

America’s heart is torn because she still has feelings for Aspen, but she is also starting to really like Maxon. And he admits he likes her too. But does she have what it takes to be queen?

Maxon must choose his Elite candidates to stick around for the next level of The Selection (and the next book). He decides on: America, Marlee, Kriss, Elise, Natalie, and to America’s surprise, Celeste.

There you go! That’s what happened in The Selection. We hope you enjoyed this The Selection summary with spoilers.

**We are in need of Recaps for the remaining books in this series. If you love to write, please submit a recap, and we’ll give your blog and or social accounts a shout-out on the recap page and on our Instagram.

Ready to read or reread The Selection Series? Click to buy and help us pay for hosting! (affiliate links)