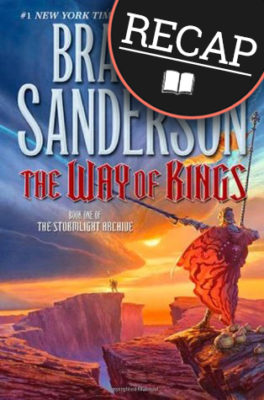 Read a full summary of The Way of Kings, book #1 in Brandon Sanderson’s Stormlight Archive. This page is full of spoilers, so beware. If you are wondering what happened in The Way of Kings, then you are in the right place!

Ratings
4.7 stars on Amazon
4.65 stars on Goodreads
Add The Way of Kings at Goodreads.

What happened in The Way of Kings?

This is a condensed recap

If you are looking for more in-depth details and definitions please visit this recap at Off-Planet Books.

Kalak picks his way across a field in the aftermath of the Desolation, a battle he has repeatedly fought and died in for centuries. He arrives at a meeting place where he and the other Heralds (leaders of the Knights Radiant) gather after battles. He finds that this time, nine of the ten have survived. Usually, they die and then are reborn to fight again. The nine use this to their advantage and break the Oathpact abandoning Talen, the one who died, to torment. Thousands of years pass without another Desolation.

Szeth, the Assassin in White, kills King Gavilar Kholin of Alethkar. Szeth is a Shin, and his masters are the Parshendi. He did not want to kill the man but was forced to. Szeth is a Surgebinder and has a Shardblade. This act brings on the War of Reckoning between the Alethi and the Parshendi. Before his death, the king told his brother, Dalinar, to use an ancient book called The Way of Kings.

Kaladin, trained in medicine, is enslaved as a bridgeman for Sadeas’s army. He joins Bridge Four and eventually becomes their leader. Kaladin often converses with a spren named Syl, who seems to follow him around.

During Highstorms, Dalinar has visions in which he sees the Knights Radiant through the eyes of those around them. They warn of the Voidbringers. Dalinar believes he is tasked with uniting the high princes. He reunites with a former friend, Sadeas, and begins making runs with him onto the Shattered Plains to fight the Parshendi and gather gemhearts.

Dalinar’s niece, Jasnah, takes on a ward named Shallan. Shallan intends to save her family home by fixing or trading her broken Soulcaster. She tries to steal Jasnah’s soulcaster but discovers that it is a fake. They can both Soulcast without a Soulcaster. By the end of the book, they have joined forces, and Jasnah teaches Shallan what she knows about the Knights Radiant and the Voidbringers. Jasnah believes that the Parshmen are Voidbringers in waiting. They prepare to travel to the Shattered Plains to meet with Dalinar.

Throughout, Kaladin gains respect from the other bridgmen, and together they gather weapons and money and train to fight. Kaladin lands in some trouble and is left outside during a Highstorm—something which should have killed him—but he lives. Kaladin apparently has special powers. He drains Stormlight from spheres.

How did The Way of Kings end?

On a bridge run in the shattered plains, Sadeas betrays Dalinar and leaves him and his men to die. Kaladin saves them. After this, Dalinar trades his shardblade “Oathbringer” for all of Sadeas’s bridgmen. He lets most go but offers Kaladin and Bridge Four the command of his personal guards. They accept. Dalinar gives his Shardplate to his son Renarin.

In a vision, Dalinar sees a man called Honor, the Almighty who was long ago slain by Odium. The message to “unite them” came from him for anyone in the best position to unite the nations of Roshar against the Everstorm. Dalinar tries to convince his son Adolin that the War of Reckoning needs to end because something bigger is coming. Adolin is confused by his father’s change of heart.

After Szeth killed Gavilar, he was passed around because he is bound to an oathstone and is forced to do the bidding of whoever holds it. Taravangian of Kharbranth acquires the oathstone. This man conducts research on the dying. He collects the mysterious words spoken by those just before they die. This man gives Szeth a list of Roshar rulers to assassinate. He is to kill them visibly using his Shardblade. Dalinar Kholin is on the list.

This was a condensed recap

If you are looking for more in-depth details and definitions please visit this recap at Off-Planet Books.

Ready to read or reread The Way of Kings? Click to buy and help us pay for hosting! (affiliate link)