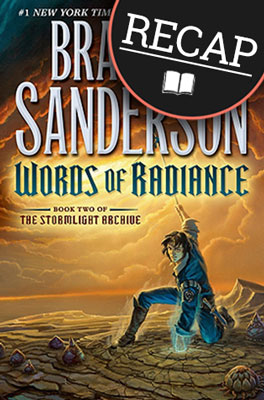 Ratings
4.7 stars on Amazon
4.65 stars on Goodreads
Add Words of Radiance at Goodreads.

What happened in Words of Radiance?

As we learned in the first novel, the Parshendi send Szeth to kill the king of Alethi, Gavilar Kholin. The Alethi are not sure why this happened, but it resulted in the treaty called the Vengeance Pact. In it, the leaders declared the War of Reckoning and tried to destroy the Parshendi. The King of Kharbranth sends Szeth to assassinate high prince Dalinar, Gavilar Kholin’s brother.

Kaladin and his former bridge crew have been recruited by Dalinar to serve as bodyguards for himself, the king, and the rest of their family. In secret, Kaladin’s crew tests him to discover the strength of his Windrunner powers.

Jasnah and Shallan travel by ship toward the Shattered Plains. Jasnah hopes to stop the Voidbringers from returning. Jasnah arranges a marriage for Shallan to her cousin Adolin Kholin. Before they arrive at the Shattered Plains, their ship is attacked. A bandit stabs Jasnah, but Shallan uses her powers to sink the ship. Shallan believes that Jasnah is dead. She eventually makes land and persuades traveling merchants to escort her to the Shattered Plains.

The Parshendi discover a power called Stormform. They will be able to conjure storms for their war against the humans.

Dalinar, the new Highprince of War, attempts to unite the Highprinces. His recent visions have focused on a countdown to the Final Desolation. The Assassin in White tries to kill Dalinar, but Kaladin and his men are just able to fend him off.

Shallan and Adolin meet and seem to like each other well enough.

Adolin, Dalinar’s son, duels other Shardbearers, taking their Shards and disrupting Sadeas’ allies. Adolin ultimately wants to ensure that he can ask a boon of the king to duel Sadeas himself. Unfortunately, Adolin finds himself tricked into dueling four men at once. Kaladin steps in to help him win.

After this, Adolin gives Kaladin a full set of Shards. His spren Syl doesn’t like the armor, so Kaladin gives it to Moash, a man Kaladin knows is plotting to kill the king. Kaladin believes that the king should be removed, but his dishonorable act of conspiring against the man severs his bond with Syl.

Shallan is a Lightweaver and can disguise as someone else. She creates a dark-eyed version of herself and works with the Ghostbloods to find out more about them.

Dalinar and Shallan lead an expedition to the center of the Shattered Plains. Shallan and Kaladin fall into the chasms, and everyone is surprised when they both live. Not only through the fall and a chasmfiend, but also through a high storm.

How did Words of Radiance end?

While Kaladin is injured, Dalinar leads everyone from his camp—and any others who will join—across the shattered plains to confront the Parshendi. Shallan hopes to find the center of the plains and the entrance to Urithiru. When they arrive, they find that the Parshendi, in their Stormform, have bonded with evil spren to summon the Everstorm. Shallan locates the Oathgate.

Moash attacks the king while everyone is away. Kaladin finally realizes that he has broken his oath to protect the king, speaks his third Ideal, and rebonds with Syl, who happens to be a Shardblade. Kal saves the king and then flies off to save the army from the Assassin in White.

Kaladin defeats the Assassin and takes the Windrunner Honorblade from him. The highstorm and the Everstorm come together, and the army escapes to Urithiru through the Oathgate.

Dalinar bonds the Stormfather. Shallan, Kaladin, and Renarin finally admit that they are Radiants.

Once safe in Urithiru, Adolin kills Sadeas in a rage. The Shardblade Oathbringer appears, so Adolin drops it out a window to hide it.

Nalan, Herald of Justice, revives Szeth and gives him a sword called Nightblood. The Assassin in White begins an apprenticeship under Nalan as a Skybreaker.

This was a condensed recap

If you are looking for more in-depth details and definitions you might try this recap of the first two books.

Ready to read the Stormlight Archive? Click to buy and help us pay for hosting! (affiliate links)