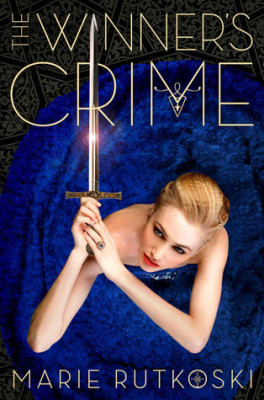 I loved the continuation of this YA forbidden love story. It’s set in a world of horse drawn carriages, swords, and ball gowns in a completely fictional land.  Kestrel finds herself living a lie as she tries to protect Arin and the Herrani. Read on for what happened in The Winner’s Crime with all the juicy details.

Ratings
4.4 stars on Amazon
4.24 stars on Goodreads
Add to your Goodreads shelves…

Main Characters and Other Info
Kestrel – 17 year old General’s daughter who is now the imperial ambassador to Herran
Arin – Newly appointed Herrani governor, former slave of Kestrel
Prince Verex – heir to the Valorian empire, Kestrel’s fiance’
Tensen – Herrani minister of agriculture
Risha – Dacran princess who was kidnapped as a child and raised as a pampered hostage in the palace
Setting – Herran, a peninsula once conquered by the Valorians where the Herrani people have recently rebelled and reclaimed their land, Valoria where the emperor lives, and Dacra in the East

What Happens in The Winner’s Crime?

The Emperor is grooming Kestrel to be the next leader. He believes his son, Prince Verex to be weak. Verex makes it clear that he doesn’t like his fathers games or the idea of marrying Kestrel. Kestrel thinks of Arin constantly and against her better judgement hopes that he will visit.

Arin receives an invitation to Kestrel and Verex’s engagement party but doesn’t wish to attend. His minister of agriculture, Tensen tries talking him into going to keep political appearances. When Tensen shows up without Arin the week before the party. Kestrel is beyond disappointed.

Did you know that there is a lot of artwork out there for the Winner’s Curse? We created a Pinterest page to store some of it. You should go check it out and follow us!

She and her fiance’ begin a sort of truce. They agree to make the best of things though Kestrel knows that he has one of her maids as a spy.

Arin has a change of heart and arrives the day of the party. That night when Kestrel sneaks off to a private place to escape the exhausting guests Arin joins her. She is glad to see him but decides that she can’t tell him the truth or give him any hope at all. She is cruel and tells him to leave her alone.

Kestrel comes to an agreement with Tensen. She will feed him political information if he will not tell Arin where the information came from.  They devise a way to communicate through a type of moth, that even in death will camouflage to its surroundings. This is how she becomes known as “the moth” to the Herrani.

The Emperor seeks Kestrel’s advice on what to do about the barbarian plains (this is part of Princess Risha’s home country). Kestrel must play the part of looking like a wise leader and being fully with Valoria but she also wants to save as many lives as possible. She suggests that they poison the horses. The results are devastating but better than death by fire.

Arin continues to try to talk with Kestrel, to get her to tell him that she doesn’t really want to marry the Prince but she stays strong in her resolve.  The emperor sees Kestrel speaking with Tensen and then catches her in a lie about speaking with Arin. The emperor tells her there will be a punishment but he makes her wait for it.

The punishment comes when the emperor has someone slice up Arin’s face with Kestrel’s dagger, which the emperor had taken from her previously. Fortunately, Arin is able to kill his attacker and escape.

Kestrel sneaks out of the palace disguised as a maid and attempts to solve the mystery of who is in the king’s pocket and what their endgame might be. Similarly, at that same time Arin is trying to find out who the king is paying off. He learns the names of the Senate Leader and the Water Engineer. While Arin and Kestrel are both out that evening they accidentally cross paths and he challenges her to a game of bite and sting. She accepts and they go to a tavern to play. While there Arin overhears people discussing how Kestrel was the one to suggest that they poison the eastern plainsmen’s horses. He gets very angry and leaves her there and swears he is through with her.

Not long after that Arin leaves and travels to the east, to Dacra, in search of allies. He realizes that the emperor will never treat Herran fairly. While there he meets Roshar, brother to the Dacran Queen and also brother to princess Risha.

Kestrel’s father and his soldiers come home from battle and the General is injured. Kestrel helps nurse him back to health. He slowly gets better but the emperor orders him to stay until Kestrel’s wedding. He also wishes Kestrel to play the piano for the court, so she must start practicing. Her father often listens to her practice from behind a hidden screen in the piano room.

Arin begins learning the Dacran language and gets to know Roshar better.

Kestrel continues to try to make the connection between the water engineer, the senate leader and now the physician.  Are they being paid off for something?

The Dacran Queen warms to Arin but she still won’t form an alliance.  Arin has the idea to create a weapon and once he finishes he demonstrates his small, portable cannon to Roshar and the queen.  They are intrigued but before they can take his idea he destroys the weapon.  He will only make more for them if they agree to be allies.

Verex continues to warn Kestrel to stay on the king’s good side. He tells her that together they could change things, the unspoken words are “after the king is dead”.

The Eastern queen agrees to be allies with Herran. Arin starts to see the truth of some of Kestrel’s actions. He realizes that she suggested they poison the plains in order to avoid a more terrible outcome. He starts to see that she agreed to marry the prince to save Herran and also to save him. He returns to Valoria to confront Kestrel once and for all about the real reason she was able to get his treaty.

How does The Winner’s Crime End?

When he finds her in the castle she is practicing her piano. She suspects that her father is in the hidden room. Arin demands the truth but she must keep appearances for her father. She tells herself that this one last time she will lie and later she will find him and set things right. She says terrible and belittling things to him. He storms off. After that Kestrel writes Arin a letter and gives it to Tensen to deliver.  She also tells him that she believes that the emperor, the water engineer, and the physician have been working together to poison the water going into Herran. Tensen does not give Arin the letter but he does warn him about the poison.

Later Kestrel grows impatient waiting for Arin to respond and walks back to Tensen’s room to see if he delivered her letter.  When she arrives, she finds the emperor there as well as her father.  Kestrel’s father told the emperor of her crimes against Valoria and killed Tensen. Kestrel is to be shipped off to a work camp in the north.  The only people that knew she was the moth are dead and very few people know where she is being sent.  The king tells her that he will fake her death in her absence.  In route to the work camp Kestrel manages to give a moth to a passing Herrani.  She asks him to give it to his governor, Arin. Kestrel continues on to the work camp as Arin, unaware of her predicament, sails home to Herran.