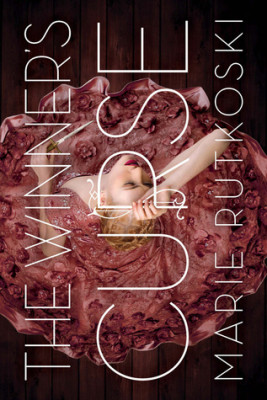 If you like a YA forbidden love story you will love this fantasy series. It’s set in a world of horse drawn carriages, swords, and ball gowns in a completely fictional land. It differs from other similar high fantasy stories I have read lately in that there are no magical elements to be found. The stubborn and very privileged heroine, Kestrel, finds herself drawn to a slave, Arin, that she herself purchased on a whim. Continue reading below for what happened in The Winner’s Curse, spoilers and all!

Ratings
4.5 stars on Amazon
4.07 stars on Goodreads
Add The Winner’s Curse at Goodreads

Main Characters and Other Info
Kestrel – 17 year old wealthy General’s daughter who is somewhat defiant and also a very skilled card player. She has a mind for battle strategy like her father but doesn’t not want to join the military
Arin – Herrani slave that Kestrel buys, was part of a wealthy family until the Harran war when his family was killed. He has learned to be a blacksmith since the war.
General Trajan – Kestrel’s father and general of the Valorian army, he has been victorious in many battles for the King, including the Harran war, around 10 years ago.
Jess – Kestrel’s best friend, another wealthy Valorian.
Ronan – Jess’s brother who wishes to marry Kestrel
Irex – Another friend/enemy of Kestrel
Setting – Herran, a peninsula conquered by the Valorians. The Herrani people have been enslaved.

What Happens in The Winner’s Curse?

Kestrel and her best friend Jess are filling their privileged days by shopping, playing cards with sailors, and doing what they please. One particular day after shopping they stop by an auction house. Up for auction are Herrani slaves. On a whim Kestrel purchases a 19 year old young man named Arin Smith. She spends a small fortune on him and takes him back to her manor where he works in the forge as a blacksmith and she spends her time in luxury as usual. They have few interactions at first and they are not very friendly.

Kestrel’s father, the General, is pressuring her to join the military but she is not sure that that is the path she wants to take. But in their society, young women must enlist or marry at an early age.

Did you know that there is a lot of artwork out there for the Winner’s Curse? We created a Pinterest page to store some of it. You should go check it out and follow us!

As time passes, Arin gains some freedoms like traveling into town alone. While there, he secretly meets with the auctioneer, named Cheat, and the two of them are planning a revolution that will free the Herrani. Arin uses his position in the generals house to gain secrets and uses his time in the forge to make weapons for his people.

Meanwhile, Arin also begins accompanying Kestrel as her escort to social outings. Most Valorians hate Herrani, including Kestrel’s friends, but Kestrel has developed a soft spot for Herrani that others do not have. One of the reasons is her love for her childhood Herrani nursemaid. Kestrel and Arin spend time together playing cards and also find that they share a love of music. The two slowly get to know each other.

During one party that Kestrel is to attend at Irex’s house, Arin is caught stealing a book. Kestrel realizes that this book was Arin’s, given to him by his parents, and this is the house that Arin live in before the war. Instead of allowing Arin to be flogged for stealing, Kestrel challenges Irex to a duel. Arin is not happy that she is taking his punishment for him and tries to talk her out of it, but Kestrel does not back down and ultimately win’s the duel using blackmail. After this rumors about Kestrel and her handsome slave run rampant.

Cheat and Arin plan to begin their revolution during the winter ball while the General and his army are away. Kestrel is to attend with Arin as her escort. Before they arrive Arin makes Kestrel promise not to drink any of the wine. While there, Jess’s brother Ronan asks Kestrel to marry him. Though he is her friend and she once would have welcomed the offer, she has to say no because she realizes that she has feelings for another certain someone. She decides to leave the ball early. On the ride home she admits to Arin that he is the reason she said no to Ronan. Arin also admits that he cares for her too. They share a kiss but at that same time there is an explosion.

Herrani around the city are revolting and it turns out that the wine at the party was poisoned and most of the guests are dead. Jess survives but is very sick. Ronan is taken to prison. Arin and other Herrani move back into Arin’s old house and he takes Kestrel with him. Kestrel is now the slave and Arin the master.

It is soon apparent that Cheat has his eyes on Kestrel and this makes Arin very uncomfortable. While she is kept locked in the garden room of Arin’s house she plans her escape. The Herrani continue to gain control of the peninsula. Cheat forces himself on Kestrel and Arin runs him through with a sword. After that Arin rises to be leader of the Harrani rebellion. They know that Kestrel’s father and his army will be coming back to squash the rebels.

Arin allows Kestrel some freedoms and spends time with her teaching her how to do mundane tasks that the nobility never learn how to do. He allows her to visit Jess and she promises Jess that the Herrani will pay for what they have done. She is conflicted in this because she sees both sides of the story. A part of her understands the reasons for the rebellion. Her lingering feelings for Arin also get in the way. But in the end she honors the promise made to her friend and escapes into the night. Arin catches up to her but lets her go.

How does The Winner’s Curse End

Kestrel lets her father and the king know all that has happened. She meets with the king and persuades him to make a deal allowing the Harrani to keep the peninsula but under Valorian control and taxes. She herself delivers this news to Arin. He accepts and she tells him that she is also now engaged to the prince, and heir to the empire. She doesn’t tell Arin that this was part of the deal with the king because she knows Arin would never accept it. Instead she cruelly lets him think that this is what she wants. That she wants to marry the prince and become queen.