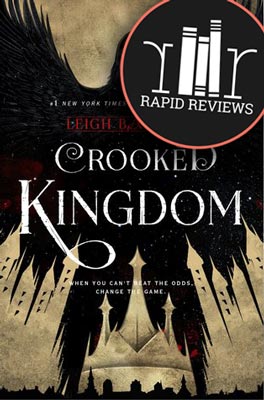 No spoilers in this review of Crooked Kingdom by Leigh Bardugo! I give it a solid 5 stars! This series is easily one of my all-time favorites.

What can I say about the brilliance of Leigh Bardugo? She has crafted a truly unique series and six fabulous, diverse characters with distinct personalities and voices. We learn even more about their backstories in Crooked Kingdom, which was a nice surprise. The characters are complex, with their own strengths and flaws, and each one evolves over the course of the duology. Their development is accomplished against the tightly woven plot and is thoroughly believable in each case.

The first book in this series, Six of Crows, ended on a cliffhanger of sorts. Despite the team members’ differences in background, philosophy, and technique, they worked together to pull off an unbelievable heist and formed strong bonds while doing so. As the heist concluded, one member made a split second error. In book two, the crew scrambles to recover from this mistake. And Kaz, their leader, has his sights set on two foes, Jan Van Eck and Pekka Rollins. His goal is the total demise of each.

STACY’S BOOK RATING
I give it 5 stars overall.
Lets be friends on Goodreads:

I said it before in my Six of Crows review, and I’ll say it again here. My favorite type of character is one who is always a step ahead of everyone else, and that is Kaz Brekker in a nutshell. I know he’s brilliant, yet he surprised me at every juncture. His carefully devised schemes hit bumps along the way, though, just like in Six of Crows, prompting me to worry that he was going to eventually run out of back-up plans and/or tricks.

I had the pleasure of attending an event on Bardugo’s book tour, and she mentioned that authors can create characters who are smarter than the writers themselves. She used Kaz as an example. But I don’t buy this for a second! 😉 The twists and turns she incorporates from the first page to the last one continually amazed me. And the payoff in the overall story arc for each character is spot-on and perfect. Bardugo is truly a master of her craft.

Instead of rambling for hours concerning things I loved about the book (which I could do!), I will conclude with this. We encounter several characters from Bardugo’s other series, The Grisha Triology, in this book. If you have read this trilogy, you will be doing a happy dance when several characters are mentioned and/or make an appearance in Crooked Kingdom.

If you haven’t read this series, I highly recommend it! If only I wanted to reveal spoilers, then I would have so much more to say! 😉 Instead, I want to let readers discover each wonderful scene, clever conversation, emotional moment, and funny quip for themselves. I wish I could go back and read these books for the first time all over again because I don’t want to leave this world! I would love to get more novels and/or novellas about this crew. Even if we don’t, I hope Bardugo continues to explore this universe and answer some of the questions she raised about Grisha powers in Crooked Kingdom. And perhaps she will eventually provide us a glimpse of what the coming years look like for the Six of Crows gang. Wouldn’t that be wonderful?!

Let us know what you think about Crooked Kingdom in the comments! No spoilers on this page please. 🙂

UPDATE: I bought the audiobook add-on to my ebook copy (a great deal, by the way!), so I have been revisiting chapters near the end of the book. I may be totally off-base here, but as I listened to one particular chapter, I began to wonder if Bardugo was dropping hints about a future project in the Grisha world. Did anybody else develop similar suspicions? If so, I would love to hear your comments below! If you have a theory, please mark it clearly with *SPOILER* since our reviews are usually spoiler-free pages.

Ready to read Crooked Kingdom? Click to buy and help us pay for hosting.