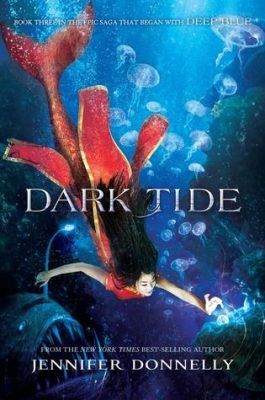 In Dark Tide, Sera’s battle against an ancient evil continues. The suspense grows with every page in this quick-paced third installment of the WaterFire Saga. Dark Tide takes place in the magical world of the merpeople.

Point of View
This book is told in third-person point of view.

Setting
This book takes place in the waters of the modern earth.

Serafina (Sera): The 16 year old true heir to the throne of Miromara

Ling: Teenage mermaid from the mer realm of Qin; an omnivoxa (can speak the language of all creatures)

Mahdi: Prince and heir to the throne of Matali

Bloodbind: A dark spell in which the blood from different mages is intertwined and forms a blood only breakable by death; Sera and her friends performed one in the Iele’s caves.

Talismans: magical objects that were once owned by the six rulers of Atlantis

What happened in Dark Tide?

The book opens with Astrid seeing a man who has no eyes in a mirror. Although she does not yet know this, the man is Orfeo. Orfeo is trying to persuade Astrid, who is one of his descendants, to help him, and in return, he will help her. Astrid quickly swims away from the mirror.

Sera, Neela, and the other Black Fins have recruited more merpeople to their resistance. Sera has taken over as leader of the Black Fins, since the previous leader was killed. The Black Fins manage to break into Miromara’s vaults and steal a lot of precious treasure. During the raid, Sera and another mermaid named Sophia are discovered and pursued by Death Riders. The two girls escape to Merrow’s ancient palace, only to find that it is now home to three Blackclaw dragons.

Sera and Sophia retreat into a crack in the palace floor that is the perfect size for two mermaids to swim through. The crack leads to a small hexagonal room with mosaics all over its walls. The mosaics show what each of the six talismans is. Sera is already in possession of Navi’s moonstone and Merrow’s diamond (and she knew about Orfeo’s black pearl), but this allows her to find out what the remaining three talismans are. Sycorax’s is a puzzle ball, Nyx’s is a ruby ring, and Pyrrha’s is a gold coin.

Becca and Astrid run into each other in a small village market. They narrowly escape Death Riders, and they decide to travel together for a while. Astrid is forced to tell Becca the secret that she had fought so hard to keep. Ever since she was a young mermaid, Astrid has been unable to sing. Becca makes a whalebone pipe, which can be played to make magic, for Astrid. Astrid is now able to cast a few simple spells.

By songcasting, Sera and Neela manage to get a hold of Becca, Astrid, and Ava. Sera tells the mermaids what and where the remaining talismans are. Becca must find Pyrrha’s gold coin. It is in Cape Horn being guarded by a wind spirit called the Williwaw. Ava must find Nyx’s ruby ring that is in the swamps of the Mississippi River. It is being guarded by the Okwa Naholo water spirits. None of the five mermaids know where Ling is, and they can’t get in contact with her.

Sera has heard that Orfeo’s pearl is no longer in the maelstrom where Merrow hid it. She wants Astrid to search the maelstrom though, just in case the pearl is still there. Astrid has still not decided if she wants to help Sera and the others yet.

Sera and the Black Fins use the treasure they stole from Miromara’s vaults to find themselves a safer headquarters. Sera gets help from the Meerteufel sea goblins. In exchange for the treasure, the goblins give Sera troops, weapons, and a place to stay. The Kargjord, hilly barrens at the North of the goblin’s realm, becomes the Black Fins’ new headquarters.

Astrid and Becca split up. Astrid heads home to Ondalina, and Becca heads for Cape Horn to find Pyrrha’s talisman. When Astrid arrives in Ondalina, she finds her father, Admiral Kolfinn, to be very ill. He has been poisoned, and Sera’s brother, Desiderio, has been accused of poisoning him.

Astrid’s father has arranged for her to be married to Rylka’s (Kolfinn’s second in command) son. Astrid wants anything but to marry him. Astrid overhears a conversation between Rylka and her son. It was Rylka who poisoned Kolfinn, and she is planning to kill both Astrid and her brother. Rylka has planned all of this so that her son can rule Ondalina. Astrid is so furious that she makes the mistake of revealing her hiding place. Rylka then accuses Astrid of poisoning Kolfinn, her own father.

Astrid escapes to the only place she can think of, the dungeons. She soon finds herself in the same cell as Sera’s brother, Desiderio. Desiderio does not give Astrid away to the guards. Astrid tells Desiderio everything that has happened to Miromara and the mer realms. He had not known.

Lucia uses a very dark song spell to find out Mahdi does not love her; he loves Serafina. Lucia is furious. She will do anything to have Mahdi for herself.

Astrid and Des escape from the dungeons. Astrid finds out her father, Kolfinn, is dead. Astrid decides to help Sera, so she and Des head towards the maelstrom that supposedly once held Orfeo’s black pearl.

In the prison camp, Lin finds her father. He had gone missing years ago; he had disappeared in the Abyss. Ling and her family had thought him to be dead. Ling’s father tells Ling that Orfeo is searching the wrong part of the Abyss for the talisman. Ling’s father himself had been holding the puzzle ball when he was captured, but he threw it. The talisman has now drifted away from the location of the prison camp.

Ling’s father helps her escape from the prison camp by hiding in the death cart. She is stung by a very poisonous jellyfish, and she goes unconscious only 20 yards from the camp.

Ling wakes to find that a ray had been covering her from view of those in the prison camp. Ling begins to make her way to the part of the Abyss that is home to Sycorax’s puzzle ball.

Sera songcasts to get in touch with Becca and Ava. Becca is five days away from Cape Horn, and Ava is on her way to the Mississippi. Sera tells Ava that Death Riders are headed there too. Ava does not hear Sera’s warning, and she doesn’t turn around.

Becca arrives at Cape Horn and she finds the home of the Williwaw. She manages to get the talisman, but during her escape, she hits into some sharp rocks and knocks herself out.

Desiderio and Astrid reach the maelstrom, called the Qanikkaaq. It is no longer home to Orfeo’s black pearl. Astrid is once again forced to reveal her secret. Des finds out she can’t songcast. Astrid and Desiderio now begin to make their way to the Kargjord to join Sera and the Black Fins.

Becca is rescued by Duca Armando’s son, who is now the new Duca. He and his sister plan to get Becca safely to the Kargjord.

Ling finds Sycorax’s talisman, but she has to swim very deep in order to find it. She is overcome by depth sickness and fits of coughing.

How did Dark Tide end?

Ling is rescued by a fangtooth and an anglerfish. They help her into the shallower waters above the Abyss. She finds out where Sera and the Black Fins are and makes her way to the Karjord.

Lucia is so set on having Mahdi as her own that she gets into some very dark magic. She has a maligno (creature made by clay and animated with blood magic) made of Mahdi. She plans on using it to trick Sera.

Ling arrives at the Kargjord as well. She is not in good shape. Before resting though, she insists on telling the others that Orfeo is back. Ling gives Sera Sycorax’s talisman and tells her about the prison camp. Sera and the others figure out a way that Orfeo could still be alive. His soul resides in the black pearl. Orfeo will somehow have to be killed.

Sera is awakened by three goblins. The goblin forces that Sera sent after Ava have been attacked by Death Riders. There had been only one survivor, and she tells Sera that no one knows where Ava is.

Sera, Neela, Ling, Becca, and Astrid perform a bloodbind. Now Astrid will be able to share the others’ abilities.

Sera manages to get in touch with Ava. She will not listen to Sera’s warnings and won’t leave for the Kargjord.

Astrid leaves the Kargjord. She plans to kill Orfeo. Sera does not want her to leave, but she doesn’t stop her. Sera wishes Astrid good luck and watches her go.

This book ends with the maligno of Mahdi floating above the Black Fins’ camp. Lucia is planning to use it to capture Sera. Sea Spell, book 4 in this series, will be released June 14, 2016!

There you go! That’s what happened in Dark Tide, book three in the WaterFire Saga!

3 thoughts on “What happened in Dark Tide? (WaterFire Saga #3)”